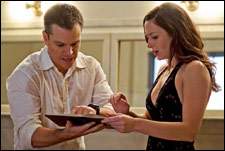 Samrat Sharma / fullhyd.com
EDITOR RATING
7.0
Performances
Script
Music/Soundtrack
Visuals
8.0
6.0
7.0
7.0
Suggestions
Can watch again
No
Good for kids
No
Good for dates
Yes
Wait for OTT
Yes
From start to about the 3/4th mark, The Adjustment Bureau, adapted by George Nolfi from Philip K. Dick's The Adjustment Team, is a fun ride as it crisscrosses between a romantic drama and a conspiracy sci-fi thriller. The pacing is a little haywire, and the characters sometimes stilted, but the film holds its own for the longest - before crumbling to less than nothingness as the end poorly misunderstands its audience and delivers a hokey and hole-riddled foil for the plot.

But let's talk about those better minutes, shall we? The movie begins as a politician David Norris (Damon) is haunted by an innocuous prank in his adolescence to the point of losing the elections. As he practises his speech in the aftermath, he meets Elise (Blunt), a dancer, and their extremely flirty conversation ends with a kiss and a goodbye.

The film does a poor job of conveying the import of this most fleeting of encounters, and we are expected to simply accept the fact that this is a significant encounter. This is a sign of the bumpy ride the film mostly offers.

The two meet each other again soon enough, and 2 men in fedora hats appear in the wake of it, bent on making sure these meetings do not happen. They also seem to have a detailed written account of the future meetings, and turn up to stop it as much as they can.

This is where it gets Dick-sian, and the weird world of the film slowly unfolds in front of you. Without spoiling it for you, I can safely say that the suspense is mounted well enough. And though the pacing is still a little shaky, the leads sell their characters to us really well, and the film coasts along on that goodwill quite easily.

Damon, especially, is extremely good in using his body language and expressions to sell us Elise's importance in his life - what is essentially the same manic pixie-dreamgirl role that every film since the dawn of time loves to unleash on us is given an extra layer of meaning and true importance. Blunt is amazing, too, though given less meaty bits to enact.

As the quintessential Philip K. Dick story unfolds, we are along for the ride, and the film delivers an entertaining and tense hour and a half. The tone of the film is really snappy, with a slightly dry and ironical touch to everything - this helps sell the dystopia better and make a good popcorn flick - and the heavy questions of free will are kept below the surface.

The end, however, which moves through some iconic landscapes of a certain famous American city, is stuff of complete idiocy. Instead of giving us a proper resolution to a love story, and big questions of whether cosmic forces need be disturbed at all, the film simply shrugs and gives us a sentimental ending that undoes everything that it had so laboriously constructed.

The film's addition of a love story and the resolution smacks of a new director (Nolfi had previously written Ocean's 12 and one of the Bourne films) being easily strong-armed by the studio system and delivering a stunted view of his vision. Go for the splendid performances and the great dialogue, but beware the brain-cell predatory ending.
Share. Save. Connect.
Tweet
THE ADJUSTMENT BUREAU SNAPSHOT

ADVERTISEMENT
This page was tagged for
The Adjustment Bureau english movie
The Adjustment Bureau reviews
release date
Matt Damon, Emily Blunt
theatres list
Follow @fullhyderabad
Follow fullhyd.com on
About Hyderabad
The Hyderabad Community
Improve fullhyd.com
More
Our Other Local Guides
Our other sites
© Copyright 1999-2009 LRR Technologies (Hyderabad), Pvt Ltd. All rights reserved. fullhyd, fullhyderabad, Welcome To The Neighbourhood are trademarks of LRR Technologies (Hyderabad) Pvt Ltd. The textual, graphic, audio and audiovisual material in this site is protected by copyright law. You may not copy, distribute, or use this material except as necessary for your personal, non-commercial use. Any trademarks are the properties of their respective owners. More on Hyderabad, India. Jobs in Hyderabad.