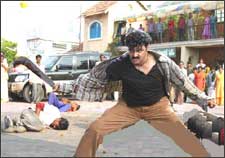 EDITOR RATING
5.0
Performances
Script
Music/Soundtrack
Visuals
NA
NA
NA
NA
Suggestions
Can watch again
NA
Good for kids
NA
Good for dates
NA
Wait for OTT
NA
With Narasimha Naidu so far away now and no real hit in close to 6 years, it's easy to say for several people that Balakrishna is a has-been. He seems to be making it easier for them to say that with each subsequent film. While other heroes take so much care now about the kind of scripts they choose and directors they work with, Balayya seems to be stuck with the old world filmmakers who like to play it safe by making films that you've already seen.

Indeed, there's so little novelty in Veerabhadra and so much banality, you can almost hear the marching orders for the director: lock your creativity in the closet and throw the key away, and write lines and scenes that fit our hero's image. Here is the manual, and you have until morning. There are special points every time you use the words “Molathradu” and “Meesam”.

The result, ladies and gentlemen, is another Balakrishna movie, another foot deeper into the hole.

Muralikrishna (Balakrishna) and his physically handicapped sister arrive at a colony in Hyderabad, and quickly win the affection of the residents when Muralikrishna delivers them from a local goon's atrocities. However, they realize he has a greater set of enemies when the super-powerful and super-evil Pedireddy (Sayaji Shinde) send his men to the colony to attack him.

The flashback then starts – Muralikrishna is the foster son of a drunkard (Prakash Raj) in Waltair, whose family he supports with his earnings, but who just use him for the money he brings in. He is extremely popular at the harbor for supporting and helping several poor fishermen, and picks up enmity with Pedireddy when his daughter (Tanushree Datta) falls in love with him.

When Muralikrishna's actual family, an extremely rich dynasty, finds him, they pay his foster father off to enable him come back, but Pedireddy, who's been harassing his original family for their property, kills his grandfather. Muralikrishna swears revenge and gets Pedireddy into jail, and comes to Hyderabad to finish him off.

The movie is Balakrishna all the way, of course, and that is kind of its undoing. For starters, Balayya looks haggard and disheveled, with bags under his eyes and all. Then, the film concentrates more on giving him thundering dialogues rather than on being innovative and subtle. It was clearly made for his fans rather than for the general Telugu audiences.

All performances are good, with Balakrishna, of course, standing out. His dancing talent is on ample display, too. Tanushree Datta is gorgeous. The music is very ordinary, however, and the songs interrupt the proceedings rather than ease them. The settings are mostly low-budget, with nothing grand anywhere.

The biggest problem is the complete lack of enthusiasm in either Balakrishna himself or in the makers to try anything different. Balakrishna's career's highpoints were Samarasimha Reddy and the subsequent Narasimha Naidu, which were completely different from what he was doing until then. He should try seeing that an indicator of how he needs to continue – keep trying different things.

It's true of everyone – it's worth noting that Chiranjeevi's only two hits in the past 4 years since Indra, were Tagore and Shankardada MBBS, both unique themes (even if remakes), as against his mass movies like Andarivaadu and Jai Chiranjeeva. NTR Jr, hot once, tried to stick to an image, and has given consecutive flops for 3 years.

Veerabhadra is just an attempt to milk Balakrishna's fan base, and can do no good to it.
Share. Save. Connect.
Tweet
VEERABHADRA SNAPSHOT

Oh God! save the people from his long running dialogues. I suggest him that it is better to stop acting and start doing some God Father Roles Or other fields like Direction, Production Etc.

What I wanna know from all the movie pundits out there is how long this movie is expected to keep running in some theater or the other.

You see, it's been a while since I've had a hearty laugh watching a movie. The last one that did it was Office Space.

I remember seeing a pre-release picture on the cover of some Telugu film magazine showing a topless [or nearly topless] Balayya riding a motorbike twice his size. That had to be from Veerabhadra.

If that picture is anything to go by, I should have a LOT of fun watching this movie.

So please, folks. Please tell me how long this movie's gonna stay.

RATING
10
Balakrishna on 16th May 2006, 2:02pm | Permalink
pchch ehe nenu narakadam modalu pedite ye mukka evarido teliyalante vaaram padutundi, asalu naa cinema vaaram daaka evaraina chudali kada, ahaaahaaa
RATING
6
Srikar G on 12th May 2006, 3:47pm | Permalink
Superb movie
RATING
10
Kris Ray on 10th May 2006, 4:12pm | Permalink
Though this movie has been pronounced "CRAP" by one and all, yesterday I went to watch this at Sudharshan 70MM. The hall is near empty for the First Show. The personnel manning the counters were looking eagerly at the people going on the road in the fond hope that some stupid or the other will come to them and buy a ticket. As I am a fan of BalaKrishna, I went to the counter, inspite of the knowledge that this is a 'pain-in-ass' kind of movie. But I was shocked to see that the usual 35 rupees tickets were hiked to 45 rupees. This is atrocious. On one hand, the film is a pure crap and nothing else, and on the other hand, the ticket prices are hiked. The film distributors must be nuts, for, they are driving away even people like me from the theaters, who refuse to pay more to watch crap (called Musali Balayya)
RATING
2
Gopi Krishna on 9th May 2006, 10:35pm | Permalink
Hello ballaya the filim was so good. I never watch this kind of movie.we are excepting more movies of this kind
RATING
2
Ramu Ramu on 5th May 2006, 6:02pm | Permalink
waste movie ..in this year 2006 .....dont go any 1
RATING
2
Sagar D on 5th May 2006, 12:45pm | Permalink
bongulo cinema
RATING
2
Kishore on 4th May 2006, 9:19am | Permalink
Better movie by balayya after long time
RATING
10
Golayya Krishna on 4th May 2006, 1:37am | Permalink
rei enduku raa tappu kuthalu kustaru...chetta cinema ni hit cheyyadaniki chustaru...only ramadas and pokiri are hit movies
RATING
2
Deepak on 3rd May 2006, 10:12pm | Permalink
This is the best from balayya, even in his weak centre hyd, till now all shows full in Sudharshan 70 mm , anyone can talk to theater management and doing 80-90% in side theaters. Best movie by balayya. New and energetic Balayya.
RATING
10
NAIDU RAKESH on 3rd May 2006, 5:51pm | Permalink
REAL HIT FOR 2006 FROM BALAYYA,CHEERS TO FANS....DONT MISS THIS MOVIE AT ANY COST.

AFTER A LONG GAP ,HE SHOWS WHAT HE IS ...RECORDS WILL CREATE BY HIMSELF ONLY...NOW ITS TIME TO OTHER HEROES TO CREATE DUPLICATE RECORDS WITH MONEY .

NO 1 CAN GIVE PERFORMANCE LIKE HIM THAT IS BALAYYA,THAT IS WHY FANS ARE DYING FOR HIM...& WAITING FOR HIM,LIVING FOR HIM.

THANKS TO PRODUCER TO GIVING US A VERY GOOD ME AFTER A LONG TIME.
RATING
10
Kishore T on 3rd May 2006, 4:33pm | Permalink
Its the another worst movie of Balakrishna. How they make films like that? they don't think of viewers? Tickets are freely available even on the third day of the movie.Its better for him to select good stories.
RATING
2
Vishnu on 3rd May 2006, 11:58am | Permalink
Nice Movie

AND Excellent performance by balayya after long time. Balayya and Songs are the main assets for the film and No Boring moments in the movie.

ADVERTISEMENT
This page was tagged for
veerabhadra telugu movie review sifty
Veerabhadra telugu movie
Veerabhadra reviews
release date
Balakrishna, Sada
Follow @fullhyderabad
Follow fullhyd.com on
About Hyderabad
The Hyderabad Community
Improve fullhyd.com
More
Our Other Local Guides
Our other sites
© Copyright 1999-2009 LRR Technologies (Hyderabad), Pvt Ltd. All rights reserved. fullhyd, fullhyderabad, Welcome To The Neighbourhood are trademarks of LRR Technologies (Hyderabad) Pvt Ltd. The textual, graphic, audio and audiovisual material in this site is protected by copyright law. You may not copy, distribute, or use this material except as necessary for your personal, non-commercial use. Any trademarks are the properties of their respective owners. More on Hyderabad, India. Jobs in Hyderabad.