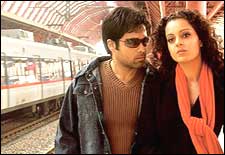 The course of events don't necessarily follow that order. Try sticking that last one in between, all around, over and under the others.

Gangster – A Love Story is surprisingly about a girl. Now she's no ordinary girl - this one has dreams. Dreams of a house, dreams of a family, dreams of dal-roti, dreams of paneer-pakoda, dreams of... you get the point. And where else to find all these, than in the arms of a gangster?

The movie starts off literally with a bang, as you witness an adrenaline-packed shootout between a man and a woman. The two are subsequently wheeled off in stretchers, and what ensues is the narration of the buildup to this scene, in a series of flashbacks.

Simran (Kangna Ranaut) is in love with a gangster Daya (Shiny Ahuja), and his treacherous trades have led him to flee the country along with Simran. He leaves her cooped up in an apartment in Seoul, while he goes about globe-trotting "earning his living".

Now you would think Simran's content since she's got most of her dreams fulfilled. But if that were the case, we'd probably be describing the rolling credits by now. No such luck. Loneliness and despair lead Simran to a life of alcoholism, and she doesn't stop till the last drop, literally. This includes scenes where she's rummaging through kachra dabbas on the road, and finally, out of sheer desperation, seeks refuge in the arms of Akash (Emraan Hashmi).

Now Akash is a bar singer in an Indian restaurant at Seoul. And he's soon besotted by our very drunk Simran. What follows is a torrid love affair between the two, and the "serial-kisser" delivers mush to your doorstep, promising the very same things that Daya did to her.

Once again, we would've loved to see credits rolling, but life, as it tends to be, isn't that generous. Daya soon stumbles upon the two of them, and after a promising scene of him trying to kill Akash, unfortunately all that happens is that our Gangster decides to "go good" on us. His jealousy actually drives him to a life of honesty so that he can win Simran's affection back.

In the midst of all this, Simran finds out she's pregnant with Akash's baby. Life is just great, isn't it? Simran's, we mean, not yours.

Now Simran has to make the eternal decision: does she run away with her baby's daddy and risk getting kille
Share. Save. Connect.
Tweet
GANGSTER - A LOVE... SNAPSHOT
GANGSTER - A LOVE STORY SNAPSHOT

Your review is jokes.

The movie sucked like all emraan hashmi stuff... its all bad stuff in his movies.

Its very humorous. After all thats what people read reviews for, right. But I agree with Kiran's review, it was a great work by all the artists. It could be that the paneer-pakoda spoiled the movie.

RATING
8
Kiran Kumar on 4th May 2006, 11:02am | Permalink
This is a very good movie...Seems the writer is too critic about this movie..After RDB,this one is the intelligent and provocative movie came..Great work by all artists and technicians..Recommed all to c this film
RATING
8
Andy S on 1st May 2006, 5:39am | Permalink
i dont know what's the problem with the reviewer...this is a love story, not a gangster movie. it is very well directed and the actors have performed creditably too. Emraan seems to mature with every movie. Shiny is outstanding and the heroine Kangna doesnt seem like a newbie! music is ofcourse gr8 as in any Bhatt production, but the 4 songs do not interfere in the story's progress. this might be another hit for Bhatt but it is totally unlike the usual Emraan film - no skin n sleaze. the only well shot love scene is very tender n totally "un-vulgar". No typical chases and "action" scenes either.
RATING
8
LEAVE A COMMENT
fullhyd.com has 700,000+ monthly visits. Tell Hyderabad what you feel about Gangster - A Love Story!
MORE MOVIES
Latest Reviews
Waltair Veerayya
Veera Simha Reddy
Top Gear
18 Pages
Dhamaka
more
Connect (Telugu)
Avatar: The Way of Water
Panchathantram
Gurtundha Seetakalam
Violent Night
Matti Kusthi
HIT: The 2nd Case
Itlu Maredumilli Prajaneekam
Love Today
Bhediya
Contemporary Reviews
Raa
Ramana
Rati Rahasyalu
Real Story
Red
more
Sampangi
Sivanna
Guri
Ram
Photo
Omkara
Casino Royale (Hindi)
Woh Lamhe
Traffic Signal
Random Reviews
Sankranthi
Miss Dyana (Boca)
Cradle 2 The Grave (Hindi)
Dus
National Treasure - Book Of ...
more
Gopi Gopika Godavari
Nightmare On Elm Street
Crazy Stupid Love
English Vinglish
Needa
The Grand Budapest Hotel
Manjhi - The Mountain Man
Trapped
Skyscraper 2018 (Telugu)
Bad Boys For Life
SEARCH MOVIES
Dissatisfied with the results? Report a problem or error, or add a listing.
ADVERTISEMENT
SHOUTBOX!
{{todo.name}}
{{todo.date}}
[
ip{{todo.ip}}
]
{{ todo.summary }}... expand »
{{ todo.text }} « collapse
First  |  Prev  |   1   2  3  {{current_page-1}}  {{current_page}}  {{current_page+1}}  {{last_page-2}}  {{last_page-1}}  {{last_page}}   |  Next  |  Last
{{todos[0].name}}

ADVERTISEMENT
This page was tagged for
Gangster A Love Story
gangster- a love story full movie
gangstar the indian love story
gangster a love story full movie
gangster love story in hindi
Follow @fullhyderabad
Follow fullhyd.com on
About Hyderabad
The Hyderabad Community
Improve fullhyd.com
More
Our Other Local Guides
Our other sites
© Copyright 1999-2009 LRR Technologies (Hyderabad), Pvt Ltd. All rights reserved. fullhyd, fullhyderabad, Welcome To The Neighbourhood are trademarks of LRR Technologies (Hyderabad) Pvt Ltd. The textual, graphic, audio and audiovisual material in this site is protected by copyright law. You may not copy, distribute, or use this material except as necessary for your personal, non-commercial use. Any trademarks are the properties of their respective owners. More on Hyderabad, India. Jobs in Hyderabad.