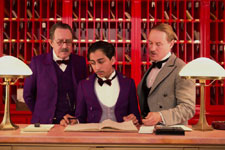 Kritika Deval / fullhyd.com
EDITOR RATING
9.5
Performances
Script
Music/Soundtrack
Visuals
9.0
10.0
8.5
10.0
Suggestions
Can watch again
Yes
Good for kids
No
Good for dates
Yes
Wait to rent it
No
There is a book that has been on this writer's mind a lot lately, enticingly titled Mr. Penumbra's 24-Hour Bookstore. A jewel of a book, it rewards those who read a lot and those who read hard, with puzzle within puzzle connecting to other puzzles within other puzzles, giving you the kind of immersive experience that makes your emotional and intellectual involvement worth it. It is exactly that kind of Japanese-puzzle-box configuration of The Grand Budapest Hotel that makes it so very rewarding to watch it.

It all begins with a happenstance set in today's world. A girl visits a memorial, and has a book in her hand whose author is known as The Author. She then walks to a nearby bench and sits down to read the first chapter.

We are then taken to another scene, now in 1985, where The Author (Tom Wilkinson) sits behind a desk and narrates his tale.

It is set in the year 1968, and involves the fictional The Grand Budapest Hotel located in the fictional Republic of Zubrowka. The Author (now played by Jude Law) is one of the few regulars to this ornate, crumbling world of great luxuries made run-down yet accessible due to decay. His passion for stories leads him to enquire about the hotel's owner Zero Mustafa (F Murray Abraham), who rewards The Author's curiosity with an opportunity to his tale.

Zero's narrative takes us further in, beginning at the same setting, but in the year 1932. Young Zero (Tony Revolori) is a lowly lobby boy at The Grand Budapest Hotel, and happily so. When the charming and devoted concierge Monsieur Gustave H (Ralph Fiennes) gets into trouble because of overt devotion (read: a proclivity towards reeling in wealthy elderly women by being really "friendly" to them), Zero and Monsieur Gustave form the kind of team that makes works like the Sherlock Holmes series and the P G Wodehouse Jeeves series so much fun.

This essential story is a wild adventure with evil villains, deep conspiracies, a phenomenal jail break, and a culmination that makes you want to weep with relief at the sudden loss of tension. It is silly, it is insane, but, at the same time, the insanity is very precisely controlled, with the characters and their movements as precisely orchestrated as our reactions to every single frame.

What you end up with is a story so organic that you don't quite know where one POV begins and the other ends, even though you get the feeling that they are all in there and are unique. What you also get is a stark contrast between the realities of a fascist Europe in the 1930s with the candy-coated world that Wes Anderson creates for us. In all this, what Anderson maketh, Anderson taketh away.

At a taut 1 hour 40 minutes, the film is just long enough for the story to be fulfilling, and just short enough for the mind not to boggle (too much, that is). The narrative is a fluid mixture of elements that remind you simultaneously of a puppet show, a Broadway musical, a '60s American novel, and a well-crafted popup coffee table book. The imagery is viscerally enthralling, every frame beautifully crafted to reward you for being able to see at all. The soundtrack joins in the thought medley with perfection.

Ralph Fiennes' extravagant comic timing is perfectly foiled by Tony Revolori's (who is arguably the most impressive in the cast) confused yet game Zero. Saoirse Ronan plays Zero's confectioner girlfriend with the kind of quirky nonchalance you could find in an Audrey Tautou film. F Murray Abraham has a face that expresses millions of emotions in an instance. Jude Law and Tom Wilkinson play their role of foils to the tale with just the right amount to finesse to let them stand out without taking over. You can feel their voices throughout the narrative, whether or not they are objectively a part of it.

The Grand Budapest Hotel is the kind of movie that makes cinephiles what they are, despite the many, many, many disappointments that we face over the course of our obsession of choice. For every hundred or so films that take you for granted, farm you, and consider you dumb, you get one of these as reward for the love you devote to the medium, and you deserve every bit of it.
Share. Save. Connect.
Tweet
THE GRAND BUDAPEST HOTEL SNAPSHOT 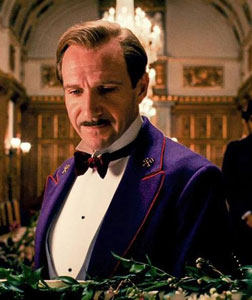 ADVERTISEMENT
This page was tagged for
The Grand Budapest Hotel english movie
The Grand Budapest Hotel reviews
release date
Ralph Fiennes, F Murray Abraham
theatres list
Follow @fullhyderabad
Follow fullhyd.com on
About Hyderabad
The Hyderabad Community
Improve fullhyd.com
More
Our Other Local Guides
Our other sites
© Copyright 1999-2009 LRR Technologies (Hyderabad), Pvt Ltd. All rights reserved. fullhyd, fullhyderabad, Welcome To The Neighbourhood are trademarks of LRR Technologies (Hyderabad) Pvt Ltd. The textual, graphic, audio and audiovisual material in this site is protected by copyright law. You may not copy, distribute, or use this material except as necessary for your personal, non-commercial use. Any trademarks are the properties of their respective owners. More on Hyderabad, India. Jobs in Hyderabad.