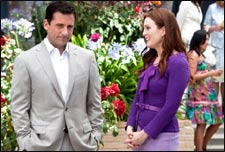 Nupur Barua / fullhyd.com
EDITOR RATING
5.0
Performances
Script
Music/Soundtrack
Visuals
7.0
6.0
5.0
6.0
Suggestions
Can watch again
No
Good for kids
No
Good for dates
Yes
Wait for OTT
No
Steve Carrell is the master of comic timing, with a talent for acting - this has pretty much been established. The question then, is, can he pull off the same tricks every time on screen? Probably not, if his latest movie (also produced by him), Crazy Stupid Love, is any indication of his popularity.

The plot starts with Cal Weaver (Steve Carrell) being told by his wide Emily (Julianne Moore) that she needs a divorce, and that she had slept with her colleague David Lindhagen (Kevin Bacon). Cal moves out, but cannot get over his wife.

A playboy, Jacob Palmer (Ryan Gosling), takes Cal under his wings and teaches him some moves, as well as how to dress better. Suddenly, Cal, who has only ever slept with one woman, finds himself desired by all the hot women in the bar, including a schoolteacher named Kate (Marisa Tomei).

So Cal obsesses about Emily, as does David; Cal's son has a crush on his babysitter, who now has a crush on Cal; Jacob makes Cal a Casanova, only to find himself at a loss for words and actions when he makes the acquaintance of a law student, Hannah (Emma Stone); and Kate is still smarting over the fact that Cal has not yet called her after a one-night stand.

Funny in spurts, Crazy Stupid Love is neither crazy enough nor stupid enough to make you want to fall in love, or to renew vows. Steve Carrell literally sleepwalks through his role. There is no spunk in the character, and he ends up looking more pathetic than tragic. Why does he, for example, sneak into his wife's garden every night? He still hangs out with the kids, so if he wants to check on his plants once in a while, he has every right to walk in through the front door in broad daylight.

The story can leave you a little confused. Have the Weavers divorced each other, or not? How come the son knows of his father's nightly jaunts? Why does Emily call her husband in the middle of the night, rambling on about some power light in the basement? Is it all ethical for a 17-year-old to give a 13-year-old boy naked pictures of herself? How is that cute? Why is it funny if a man asks a potential bed-mate if she has AIDS? And why is Emma Stone's character so desperate for some loser to propose to her, and why does she break up when he says he needs time?

Ryan Gosling is insipid. He is not convincing as the suave lover who can pick up women after offering them one drink. The story about a strong mother and a weak father seems rather contrived, and if that is what should explain Jacob's almost-gigolo ways, then it fails in its purpose.

Julianne Moore looks old and tired, but then, she is playing the mother of 3 children. Men seem to fall for Emily, but it is never clear why. Apparently, Emily married when she was 17 years old, and therefore she does not know what she wants at the age of 44 - or at least, that is what the script says.

However, overall, despite the lack of a coherent script and a dearth of interested actors, Crazy Stupid Love is a one-time watch, only for Steve Carrell. And for some weird one-liners that will probably come in use should you decide to write a romantic version of Chicken Soup For The Soul.
Share. Save. Connect.
Tweet
CRAZY STUPID LOVE SNAPSHOT

ADVERTISEMENT
This page was tagged for
Crazy Stupid Love english movie
Crazy Stupid Love reviews
release date
Steve Carrell, Ryan Gosling
theatres list
Follow @fullhyderabad
Follow fullhyd.com on
About Hyderabad
The Hyderabad Community
Improve fullhyd.com
More
Our Other Local Guides
Our other sites
© Copyright 1999-2009 LRR Technologies (Hyderabad), Pvt Ltd. All rights reserved. fullhyd, fullhyderabad, Welcome To The Neighbourhood are trademarks of LRR Technologies (Hyderabad) Pvt Ltd. The textual, graphic, audio and audiovisual material in this site is protected by copyright law. You may not copy, distribute, or use this material except as necessary for your personal, non-commercial use. Any trademarks are the properties of their respective owners. More on Hyderabad, India. Jobs in Hyderabad.