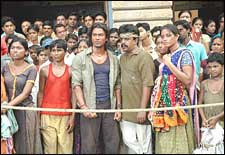 Samrat Sharma / fullhyd.com
EDITOR RATING
5.0
Performances
Script
Music/Soundtrack
Visuals
NA
NA
NA
NA
Suggestions
Can watch again
NA
Good for kids
NA
Good for dates
NA
Wait for OTT
NA
An ensemble cast and a faux real setting have become a template for Madhur Bhandarkar to showcase moments in people's lives as he perceives them, and he has met with a lot of success with this previous films. But the patchy sketches in Traffic Signal prove that even the most dependable formula is not foolproof.

Let's be fair here - there is a certain section of the audience that thinks Bhandarkar can do no wrong, and for them this may turn out to be a great film. If you are one of those people, please read no further, because I sure as hell didn't like this film. In yet another movie exploring the behind-the-scenes of Mumbai's seedy underbelly, you can be sure that Madhur pulls no stops to give you more of the same.

If you've seen Bhandarkar's previous films, Traffic Signal is a repetitive blur of interchangeable characters who talk coarsely, hustle in and around a Traffic Signal, and lend to the unique economy thriving around it. Silisila (Kunal Khemu) is the man in charge of hafta vasooli around the particular signal this film revolves. Working for/around him are various hustlers, beggars, prostitutes and operators trying to make a fast buck off the next car that stops.

He reports to a bhai, who reports to the main Bhai(Sudhir Mishra), who is the kingpin running the show in various areas of Mumbai city, responsible for a staggering Rs. 180 crores of business a year, we are told. Oh, and the political nexus is thrown in for its own sake. When big bad Bhai accepts a contract on a PWD engineer's head (or should that be consumes Supari?), it threatens the existence of the signal itself, to save which Silsila must turn to the law.

That would have been a cracking story for a film, but sadly, Traffic Signal ignores the potential and chooses to show all the developments in the last 15 minutes, only to end it all abruptly. So what do the rest of the initial 2 hours have in store? Short vignettes of people in cars, children begging, prostitutes and their competition with a gigolo, junkies, and the general riff-raff you encounter but never think about.

It's not that the film is busy with establishing these people as characters and telling their stories. Their stories are told, but in staccato, halting tracks, and while these slice of life moments serve as great vantage points to view these characters, the film never really explores them fully. These moments take most of the film's length, and you are left waiting for something, anything, to happen.

It doesn't help that the acting is inconsistent. While Kunal Khemu and Neetu Chandra are passable, Konkona Sen Sharma and Ranvir Shorey do a great job in the little time they get. They are fantastic actors, and the film benefits from their little story. The rest of the cast looks like they followed instructions when shooting, but forgot everything while dubbing. The end result is a general sense of sub par acting all through the film, rescued only in bits by the main players.

But Madhur Bhandarkar, once such a rigorous force of cinema, directs limply, eliciting neither the primal performances needed of the complete cast, nor the true nature of the sense of family these homeless people develop. The script is choc-a-bloc with wry moments, but nary a story to be found anywhere. Even the dialog is tame. Maybe a few years back this would have been hard-hitting, but after the slew of gangland dramas unleashed by RGV's horde, the dialog appears samey and lacking the bite required.

The less said about the music the better, especially the silly shoehorning of a raunchy item number into the sombre proceedings. The cinematography, on the other hand, is subtly yet masterfully handled. There are frames that come alive, and yet the wizardry never interferes with the expressions the characters don.

My fervent wish was that the interesting concept, the solid photography, and the dependable acting cojones of Shorey and Sharma would translate to a film that told a great story full of interesting characters. Instead, what we have is a bizarrely structured film that has no plot, 15 minutes of story, and interesting moments thrown about like pieces of rag. I guess I expected more of a professional venture aiming at showcasing a certain seedy sub-culture.
Share. Save. Connect.
Tweet
TRAFFIC SIGNAL SNAPSHOT

ADVERTISEMENT
This page was tagged for
Traffic Signal hindi movie
Traffic Signal reviews
release date
Konkona Sen Sharma, Ranvir Shorey
theatres list
Follow @fullhyderabad
Follow fullhyd.com on
About Hyderabad
The Hyderabad Community
Improve fullhyd.com
More
Our Other Local Guides
Our other sites
© Copyright 1999-2009 LRR Technologies (Hyderabad), Pvt Ltd. All rights reserved. fullhyd, fullhyderabad, Welcome To The Neighbourhood are trademarks of LRR Technologies (Hyderabad) Pvt Ltd. The textual, graphic, audio and audiovisual material in this site is protected by copyright law. You may not copy, distribute, or use this material except as necessary for your personal, non-commercial use. Any trademarks are the properties of their respective owners. More on Hyderabad, India. Jobs in Hyderabad.