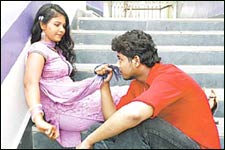 EDITOR RATING
3.0
Performances
Script
Music/Soundtrack
Visuals
NA
NA
NA
NA
Suggestions
Can watch again
NA
Good for kids
NA
Good for dates
NA
Wait to rent it
NA
It always feels good if you get scared in a horror film, but Photo scares you even before any horror has actually begun. The first time that you get scared in Photo is during the first song, an opening duet between the hero and heroine, who look straight out of whichever Telugu TV serial first comes to your mind. The lyrics look like they were written in Africa, and the music like it was composed under it. And thereon, it is mostly downhill.

Photo is a bold attempt to make a horror movie that looks like every other horror movie that you have seen - the only original parts are the credits. When you use unknown names for your lead cast, you have to have a really good script, or a really rich financier. Siva Nageswara Rao has neither. What he can ship out then, is a product that looks like a film school graduation project, in a genre that Ram Gopal Varma has put all his creativity into.

Siddharth (Anand) and his girlfriend Bhanu (Anjali) are driving home one night when a mysterious incident on the road leads them to crash into a young woman. Siddharth dashes despite Bhanu suggesting they help out.

From the next day on, Siddharth starts feeling and seeing unknown and horrifying sights. He gets beaten up by something he can't see, gets scary dreams, and finds weird patterns in photographs that he, an amateur photographer, shoots.

They meet an specialist in other-worldly spirits (Nutan Prasad), who tells them that they are being haunted, and that any spirit gets captured on Polaroid photos. The misery keeps piling up for Siddharth, who soon discovers that three of his college friends died gruesome deaths under mysterious circumstances, and he concludes he is next in line.

He tells an extremely supportive Bhanu then about how a junior of his, Sneha (Mukta), was in love with him when he at college since for a whole year since he befriended her and spent huge amounts of time with her, and how he broke her heart cruelly when she wanted to marry him, saying college romances do not work. Unable to bear the trauma, she threatens to commit suicide, but it cannot move Siddharth, who tells her to do what she wants.

He's lost touch with her after that, and when Bhanu suggests they try to track her down, they get her address and reach her village, where she's returned. However, they find something unbelieveable when they reach her home, and the attacks hit gale force 10 for Siddharth after that.

The film is slow all through, and especially in the second half. If you are a horror film buff, you'll get entertained for a while, especially when the thrills are delivered according to the syllabus in the climax. However, a key molestation scene in the college flashback is so illogical, you lose all respect for anything you had developed respect for in your life.

The performances by the lead actors are amatuerish, and this combined with the fact that none of them looks like lead material, flushes the entertainment value of this down the toilet. The songs look like someone is trying to take this film seriously. The visual effects are low-budget, and it shows. What they can afford is some popular comic actors for 1-minute roles, and that adds some comic garnishing to an otherwise bleak tale.

ADVERTISEMENT
This page was tagged for
Photo telugu movie
Photo reviews
release date
Anand, Anjali
theatres list
Follow @fullhyderabad
Follow fullhyd.com on
About Hyderabad
The Hyderabad Community
Improve fullhyd.com
More
Our Other Local Guides
Our other sites
© Copyright 1999-2009 LRR Technologies (Hyderabad), Pvt Ltd. All rights reserved. fullhyd, fullhyderabad, Welcome To The Neighbourhood are trademarks of LRR Technologies (Hyderabad) Pvt Ltd. The textual, graphic, audio and audiovisual material in this site is protected by copyright law. You may not copy, distribute, or use this material except as necessary for your personal, non-commercial use. Any trademarks are the properties of their respective owners. More on Hyderabad, India. Jobs in Hyderabad.