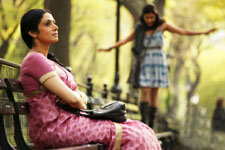 Deepa Garimella / fullhyd.com
EDITOR RATING
7.0
Performances
Script
Music/Soundtrack
Visuals
10.0
6.5
8.5
8.5
Suggestions
Can watch again
Yes
Good for kids
Yes
Good for dates
Yes
Wait to rent it
No
English Vinglish, Sridevi's red carpet comeback into acting, can be best described as a Sridevi festival. Ironically, in contrast to the crowd-pulling ability she demonstrated in her time, this one is a multiplex film that might not draw in audiences by the hordes. A pity, because it is a movie that deserves to be seen. Even if you're from a generation that grew up during the whole time Sridevi was away from the big screen.

Anyone who has seen the promos knows the premise by now. Shashi (Sridevi), the perfect housewife-cum-mom-cum-wife, is frequently stung by her family's (i.e., her husband and her kids) mockery of her poor English. She doesn't get the appreciation and respect that she craves - neither from her busy, condescending husband (Adil Hussain), not from her increasingly-uncomfortable-around-mom-in-social-situations teenage daughter. (Full marks to the cherubic son who innocently roots for mamma all the time, meanwhile.)

This lady is not empowered - despite the fact that she sells laddoos as a hobby - so when she has to travel to New York alone (until her husband and her kids join her) for a wedding, her journey and her first brush with The United States Of America is not very pleasant. (Although you might argue that having Amitabh Bachchan sitting next to you throughout an inter-continental flight counts for something.)

Timid, afraid and hesitant, she joins an English-speaking course. And the rest is history. The English class serves as the perfect setting for a revisit of Mind Your Language, and Shashi makes friends there, and gets a French admirer as well.

Gracefully mixing the issues of a homemaker's self-worth and culture shocks of desis abroad, English Vinglish is an unhurried, heart-warming slice-of-life depiction of Shashi's adventures. This is a story that several of us can identify with - including our moms, our aunts, our grandmothers. And anyone, really. Although it starts out slow and bores you slightly with Shashi's struggles with her self-esteem, the second half makes up for its sins.

English Vinglish looks like it was written for Sridevi, who is the DNA of film. Whether she's being overwhelmed trying to buy lunch, or whether she's revelling in her discovery of her true worth, Shashi never comes across as a stereotype. Sridevi, being Sridevi, breathes life into her character, making her heart-breakingly naive and wonderfully charming at the same time. She handles wit and pathos with equal panache, and this role makes her traverse a vast range of emotions.

And the grace. Sigh.

English Vinglish is perhaps the most sensible and dignified portrayal of the Indian homemaker, in a long, long time. Having women at the helm (Gauri Shinde, Balki's wife, wrote and directed this) helps, clearly. The role has been intelligently crafted and written, and the dialogues, though sometimes predictable, are good.

Sridevi lends Shashi her own grace and elegance. Mind you - this is not the sophistication of an elite woman, or the empty-headed-ness of a wife who shops her husband's bank balance out. This is middle-class (oh all right, upper middle class). Presented in a well-dressed way, of course.

It is, overall, a top-class set of performances. In particular, Adil Hussain is great as the disdainful the husband. Priya Anand, as the bubbly niece who turns out to be the only one who empathizes with Shashi, is a nice fit to her role. Shashi's classmates from the English course are all an entertaining bunch. So is Amitabh Bachchan.

They've roped in Amit Trivedi for the music, but interestingly, the background score retains an Ilayaraja touch. It is, in any case, a good collection of compositions. The visuals are clean, refreshing and warm.

Do watch English Vinglish, and with your family, but do it soon. Like a special edition chocolate cake, it won't be around for long. And yes, it's good to see Sridevi back.
Share. Save. Connect.
Tweet
ENGLISH VINGLISH SNAPSHOT 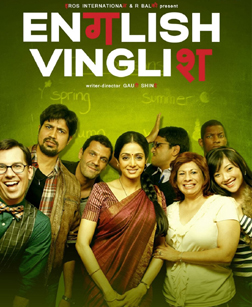 ADVERTISEMENT
This page was tagged for
english vinglish hindi movie download13
English Vinglish hindi movie
English Vinglish reviews
release date
Sridevi, Amitabh Bachchan
Follow @fullhyderabad
Follow fullhyd.com on
About Hyderabad
The Hyderabad Community
Improve fullhyd.com
More
Our Other Local Guides
Our other sites
© Copyright 1999-2009 LRR Technologies (Hyderabad), Pvt Ltd. All rights reserved. fullhyd, fullhyderabad, Welcome To The Neighbourhood are trademarks of LRR Technologies (Hyderabad) Pvt Ltd. The textual, graphic, audio and audiovisual material in this site is protected by copyright law. You may not copy, distribute, or use this material except as necessary for your personal, non-commercial use. Any trademarks are the properties of their respective owners. More on Hyderabad, India. Jobs in Hyderabad.