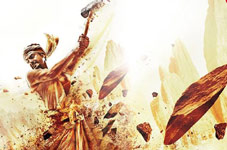 Josh / fullhyd.com
EDITOR RATING
5.5
Performances
Script
Music/Soundtrack
Visuals
8.0
4.0
6.0
6.0
Suggestions
Can watch again
No
Good for kids
No
Good for dates
No
Wait to rent it
Yes
A man chooses to realise his dream. He is determined, indignant, and, importantly, perseverant. There are colossal obstacles in his way - most people would just give up - but he keeps doing his thing. He crosses the hurdles and bears much pain, all in the pursuit of his goal.

We could be talking about three different people in those lines - Dasarath Manjhi, the superhuman achiever who literally broke a mountain with ordinary tools and extraordinary resolve; Nawazuddin Siddiqui, an extraordinary actor who went from poverty and obscurity to some of the choicest critical acclaim pronounced in this country; and lastly, Ketan Mehta, the not-so-extraordinary director of Manjhi - The Mountain Man, who keeps making movies that matter in spite of the highly discouraging environment of Bollywood.

We'll begin with Dasarath Manjhi (Nawazuddin Siddiqui), the man who deserves all the celebration he gets. Unless you've been living under a rock (and certainly not one that Manjhi hammered), you know by now that he was a man in Bihar who essentially carved a path through a mountain. His beloved wife (Radhika Apte) could have survived an accident if there was a shorter path from their hamlet Gehlaur to the hospital in Wazirganj, instead of the long-winded one going around the mountain. And this fact stings him enough to challenge the might of the mountain.

This much, you already know. The movie gives you the additional context such as how Dasarath was a rebellious fellow right from his childhood. He runs away from his home to avoid bonded labour and works in the Dhanbad coal mines for the next seven years. This, and the general conditions of life of his community (he belongs to an untouchable caste of rat-catchers), provide more insight into what might have been going through his head when he chose to tackle the impossible.

This is an irreverent man who has seen far too much injustice because of a system which is as old and ingrained as Gehlaur's mountain itself. The defiance was perhaps already simmering through him when he saw his friends die due to negligence of the landlords, and the women in his community were raped as punishment for any men that protested. And then he loses the one person he loved, due to the towering rigidity of the mountain, and he feels it's time he picked up a battle.

There is so much juice in this drama. And the man trying to make the best of it is Nawazuddin Siddiqui. Sadly, he's alone there. The writing and direction don't lend him much to stand and work on. But he still endeavours to find more and more to do with the material despite its unbearable flatness. The way he ages, like how his gait grows more confident in attitude despite less certainty in hold, is a marvel to watch. Dismissive humour, utter resolve, undying love, desperation - he oozes them all like he were really feeling those things.

And yet, you can't help feeling underwhelmed. One has to reflect on how actors may be the most dependent artists in creative work. They need a script they can work with. A director with a vision that they can help realise. But if they can't find such talent, their own talent stays locked within, unknown and unrealised.

And so think of the cast apart from Siddiqui, too - Radhika Apte is a fluid actress who can easily negotiate and play with the dimensions of class and conservativeness. (Seen her as the sultry Ahalya yet? Yes, it's the same lady who played the shy lower middle class housewife in Shor In The City.) Pankaj Tripathi (Ehsaan Qureshi from GOW) and Tigmangshu Dhulia (Ramadhir Singh from GOW) are both highly competent actors. And all three of them feel wasted. Siddiqui himself barely manages to keep your attention.

Maybe it's because Ketan Mehta studied filmmaking (he's an FTII product) in a bygone era. Watching Manjhi repeatedly reminded this reviewer of Doordarshan for some reason. The detailing is rich and authentic, but simple things like the wigs or the blood from the wounds look ludicrous. The acting by much of the supporting cast is so mechanical, it makes you wonder what Mehta was thinking. It's possible he is immune to these things that the later generations started picking up on.

Or maybe he's just not a very good writer. Manjhi often plays like a bunch of assorted scenes. Despite great cinematography, editing and music, very few scenes really come alive. The romance doesn't register (it only does much later when you see Siddiqui apologising to his dead wife when he thinks he's failed); the caste-based atrocities come and go quickly (and the schoolplay staging doesn't help); and the actual journey to the hospital - yes, the one where Manjhi's bleeding wife is being carried, the one where we should feel the bite and hate the mountain - plays in a brisk 30 seconds. It's all so matter-of-factly, it's saddening.

You would wish Ketan Mehta approached his writing and direction differently. Because here's a man who has access to the who's who in Bollywood and yet chooses to make movies on Mangal Pandey, Raja Ravi Verma, and Sardar Vallabhai Patel. Like his latest subject, he, too, refuses to conform, and he, too, wants to do his thing. He clearly wants to tell some great stories. You only wish he could tell them well, too.
Share. Save. Connect.
Tweet
MANJHI - THE MOUNTAIN... SNAPSHOT
MANJHI - THE MOUNTAIN MAN SNAPSHOT 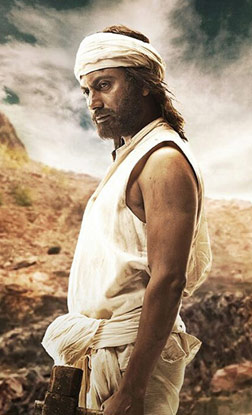 ADVERTISEMENT
This page was tagged for
manjhi the mountain man 4 movie
Manjhi - The Mountain Man hindi movie
Manjhi - The Mountain Man reviews
release date
Nawazuddin Siddiqui, Radhika Apte
Follow @fullhyderabad
Follow fullhyd.com on
About Hyderabad
The Hyderabad Community
Improve fullhyd.com
More
Our Other Local Guides
Our other sites
© Copyright 1999-2009 LRR Technologies (Hyderabad), Pvt Ltd. All rights reserved. fullhyd, fullhyderabad, Welcome To The Neighbourhood are trademarks of LRR Technologies (Hyderabad) Pvt Ltd. The textual, graphic, audio and audiovisual material in this site is protected by copyright law. You may not copy, distribute, or use this material except as necessary for your personal, non-commercial use. Any trademarks are the properties of their respective owners. More on Hyderabad, India. Jobs in Hyderabad.