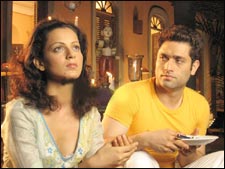 Samrat Sharma / fullhyd.com
EDITOR RATING
6.0
Performances
Script
Music/Soundtrack
Visuals
NA
NA
NA
NA
Suggestions
Can watch again
NA
Good for kids
NA
Good for dates
NA
Wait for OTT
NA
A motormouth filmmaker who always shoots straight from the hip has written a story about his torrid yet poignant affair with a star of the 70s, a woman who broke a million hearts every Friday, but was wrenched with inner guilt and paranoia. That the filmmaker in question happens to be Mahesh Bhatt, and the actress happens to be Parveen Babi, lends this week's Woh Lamhe a curiosity value all its own.

Pity then, that the Bhatt camp decided to tell a diluted version of the tale story-wise, creating pretty much a straightforward plot which would have done better to last about an hour and a half. To director Mohit Suri's credit, he decides to put an interesting twist to the narrative, and structures a relatively weaker script in a way that makes this film watchable.

Sana Azim (Kangna Ranaut) is a movie superstar, wracked by her inner demons in private, but a spectacular entertainer on and off screen to the world. Aditya Garewal (Shiney Ahuja) is a hotshot filmmaker, who gets news of a suicide attempt by Sana one night, and rushes to the ICU. The tale unfolds in a classic Mahesh Bhatt style structured flashback interwoven with the present from there (think Zakhm).

The film then tells the ill-fated love story of the oddball couple - Aditya, a struggling director looking for a big movie break, and Sana, a star who wants to be appreciated for her personality, herself, and needs to be understood and made to feel alive.

The style of the film is to an extent colorful, mostly to underplay the brevity of the narrative going on. Sana has to suffer a lot for contracts and brand endorsements, and after a particularly brutal rape by her domineering and possessive boyfriend (Shaad Randhawa), she starts to snap. Aditya, meanwhile, gets dates to work with her, and decides to use her vulnerability to attain maximum mileage in his directorial ventures. Gradually, his love for her surfaces, but sadly so does her schizophrenia.

While the first half is mostly a breezy narrative interspersed with some pretty decent songs from Pritam, it is near the second half, where Sana's schizophrenia kicks in, that the darker side of the relationship is revealed for maximum effect, and Suri uses his leads so well, the film comes alive.

Ranaut is fantastic as a dual-layered schizophrenic film star, and despite having nothing to do with Parveen Babi looks-wise, she plays the role with such precision and controlled bravado, that you fail to make the comparison. Ahuja has the less meatier role, and does have to contend with the non-author-backed role amongst the leads, but his simmering emotions come forth at exactly the right moments, and he delivers a controlled performance worthy of the scale of the erstwhile controversy.

Both the leads have sufficiently complex characters to portray, and both of them bring forth powerful emotions with performances to match. Matching his actors subtle nuance for subtle nuance is the director, who employs a controlled sensibility for the subject matter to create a dark, brooding romance with its feet set firmly in the place it belongs, the Bollywood masala milieu. Despite schizophrenia, jealousy, manipulation, greed, lust and love as its ingredient emotions, the film does not go over the top even once, and full marks to Suri for keeping that in check.

If there is a complaint you have with this film, it is the dragging pace of it, especially in the second half. Pearl Shahi churns up a serviceable script, but one that is exasperating in its pacing. Although the structure remains interesting, the film's pace is langorous to the point of frustration at times. It is largely due to the lead performances and the top-notch acting jobs from the supporting cast, that the film manages to keep your interest till the end.

Woh Lamhe feels, sounds, talks, and walks like a Bollywood romantic film. Don't let that fool you, though. It has enough emotional depth and character complexity to give any seriously made drama a run for its money. This is a solidly entertaining attempt from the Bhatt camp, and like Gangster – (strangely enough, with the same lead cast), an exercise in medium-budget grand storytelling. This is mostly a triumph in execution, and a lot of supposed romantic filmmakers might learn from the Bhatts here.

Beware of the slow pace, but otherwise, recommended for fans of well-told stories and well-executed filmmaking.
Share. Save. Connect.
Tweet
WOH LAMHE SNAPSHOT

ADVERTISEMENT
This page was tagged for
lamhe movie goog
lamhe on rdx HD. in
woh lamhe movie pics
Woh Lamhe
lamhe hindi movie
Follow @fullhyderabad
Follow fullhyd.com on
About Hyderabad
The Hyderabad Community
Improve fullhyd.com
More
Our Other Local Guides
Our other sites
© Copyright 1999-2009 LRR Technologies (Hyderabad), Pvt Ltd. All rights reserved. fullhyd, fullhyderabad, Welcome To The Neighbourhood are trademarks of LRR Technologies (Hyderabad) Pvt Ltd. The textual, graphic, audio and audiovisual material in this site is protected by copyright law. You may not copy, distribute, or use this material except as necessary for your personal, non-commercial use. Any trademarks are the properties of their respective owners. More on Hyderabad, India. Jobs in Hyderabad.