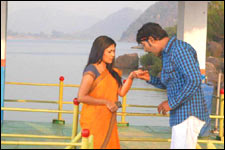 EDITOR RATING
3.5
Performances
Script
Music/Soundtrack
Visuals
7.0
3.0
6.0
6.0
Suggestions
Can watch again
No
Good for kids
No
Good for dates
Yes
Wait for OTT
Yes
Vamsy's impressive filmography, which normally would put him on the same pedestal as K Vishwanath, Bapu and Jandhyala, has often been marred by a preference for the risque - an unnecessary predilection to use a sieve upon what would otherwise have been a U audience. Arguably his two most memorable works to this date, April 1 Vidudala and Ladies Tailor, are stark examples of that rather unfortunate propensity for adult humour. Gopi Gopika Godavari will not make that list, and the reason is more tragic than relieving - it's not a memorable movie to start with.

Gopi Gopika Godavari is in the same palette as most Vamsy movies of the '80s and '90s - set in rural Andhra Pradesh, with the dialect of the Godavari and the coastal hinterland, and middle class family settings. However, Vamsy fails to keep pace with the changing pulse of audiences - for a generation used to a glut of entertainment options and with short attention spans, a movie has to entertain and keep them in high spirits continuously. The plot of Gopi Gopika Godavari almost dies after a reasonably encouraging first half, and that proves its bane.

Gopika (Kamalinee Mukherjee) is a kind-hearted young doctor who chooses to serve the poor in villages in the Godavari belt around Rajahmundry through a mobile hospital - a launch with some beds, first aid and some nursing staff. The film trolls around languidly on the East Godavari canvas as it sets up its premise, and thus can't help but endear itself to people who hail from that part of the state.

Gopika accidentally gets in touch with Gopi (Venu), an orchestra singer in Hyderabad, when the latter lands upon a cellphone that her friend has lost. They grow fond of each other as they have continued conversations, and fall in love, too, without having seen each other even once. They are about to finally meet when Gopika summons Gopi to her village to meet her mother, but on the way there Gopi gets into a fracas with some thugs that results in a blow on his head and him losing his memory.

Gopi Gopika Godavari might have been passably engrossing but for its second half, which lacks in both entertainment and soul. A typical romance has the courtship, the estrangement (or equivalent), and the getting back together. Handling the estrangement is the key, since it is the part that depresses the viewer who did not come to get depressed. Gopi Gopika... spends over an entire hour without things looking like they'll improve - and, actually, with the situation continuously deteriorating.

Kamalinee Mukherjee is talented and graceful as always, and Venu is a better actor than he used to be, though this film might not do much for his sagging career. Gitanjali as Gopi's mother does a good job. The film mercifully has just about 3 songs (including an item number), which are nothing to write home about really. The movie's being set on the Godavari and its banks, of course, throws a long rope to the cinematographer, and he uses it up almost fully in doing a mostly average job.

Gopi Gopika Godavari is for those who do not mind an average filmmaking effort if it will take them to what they consider home. If you liked this, hopefully you didn't miss the one by the other Vamsi.
Share. Save. Connect.
Tweet
GOPI GOPIKA GODAVARI SNAPSHOT


Pros: music
Cons: everything is crap in this movie. Dont waste your money. Absolutely worthless and senseless.

ADVERTISEMENT
This page was tagged for
gopi gopika godavari naa songs
gopi gopika godavari naa songs download telugu
Gopi Gopika Godavari telugu movie
Gopi Gopika Godavari reviews
release date
Follow @fullhyderabad
Follow fullhyd.com on
About Hyderabad
The Hyderabad Community
Improve fullhyd.com
More
Our Other Local Guides
Our other sites
© Copyright 1999-2009 LRR Technologies (Hyderabad), Pvt Ltd. All rights reserved. fullhyd, fullhyderabad, Welcome To The Neighbourhood are trademarks of LRR Technologies (Hyderabad) Pvt Ltd. The textual, graphic, audio and audiovisual material in this site is protected by copyright law. You may not copy, distribute, or use this material except as necessary for your personal, non-commercial use. Any trademarks are the properties of their respective owners. More on Hyderabad, India. Jobs in Hyderabad.