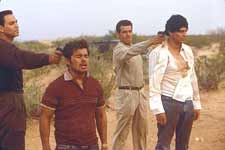 Smriti Kashyap / fullhyd.com
EDITOR RATING
8.0
Performances
Script
Music/Soundtrack
Visuals
NA
NA
NA
NA
Suggestions
Can watch again
NA
Good for kids
NA
Good for dates
NA
Wait to rent it
NA
If Puff The Magic Dragon is your theme song, then I'm not quite sure you might want to watch this one. A cinematic version of the drug trafficking between America and delinquent Mexico, Traffic is pretty antiseptic in its approach. It's a no-nonsense, stripped down and scrubbed-clean narration of the characters whose lives are spun in a web of narcotics.

The film has three distinct storylines. The first focuses on the life of the newly appointed head of the US Drug Policy Dept, James Wakefield (Michael Douglas). Not only having to deal with the escalating use of drugs in America, Wakefield has also to contend with the fact of his daughter being a drug fiend. 16 and a straight A's student, Erika Christensen gets stuck in a quagmire of drug abuse. The film is drenched in blue tones as it focuses on Douglas' trying to cope with his parental angst. It follows the daughter's trials and tribulations as she makes her way to rehab, only to sneak away.

The second storyline, and perhaps the most compelling, comprises the scenes set in Mexico. Benicio Del Toro is a quiet, almost Zorro-esque altruistic cop, swimming against the current as he tries to bring down the two most powerful drug cartels in Mexico. His nemesis is his corrupt boss and almost corrupt partner. The film is shot in tones of sepia, thus giving Mexico a sun drenched, almost parched look, as it examines the intricacies of battling the drug cartels.

The final tale is that which features Catherine Zeta-Jones as the unsuspecting wife of a drug dealer whose act gets busted by Don Cheadle, a tough-as-nails cop whose obdurate nature causes him to fail to look beyond his narrow vision. Zeta-Jones plays Mrs. Ayala, who'll resort to every trick in the book to keep her home and family intact.

These intertwining vignettes framing the tale make Traffic a compelling film. Its narration is simple and matter of fact, the characters real and unsensational. There are a couple of great scenes in the film, and if you play close attention, it makes much more sense than any other film on drugs ever did.

The scenes between Montel (Don Cheadle) and Eduardo (Miguel Ferrer) are good, as both present two different aspects of the drug trade. Montel, a cop, is almost idealistic in his anti-drug tirade, whereas Miguel rationalizes that the drug business is nothing more than any other business, except that in the ensuing drug battles, it is always the innocents who get killed. The drug cartel members get away scot-free - Montel's partner being a case in point. Similar scenes put forth the reality of the narcotics industry with the same sort of detachment, which make it eerie and too real.

The film, with its focus on the drug trail, hits hard as you are presented staggering statistics about the problem in America. There are a couple of sneaky scenes like the one where the border between American and Mexico is shown. The Americans seem more concerned about what's coming into America than what's going out. Moments like this dot the film and seem to be the proverbial iron fist within the velvet glove.

Traffic is a good film that goes beyond the political rhetoric spouted. It sheds light on the complexities of the drug war and brings the problem closer to America, where its impact is felt intimately. This is expertly achieved by a bravura feat of direction by Steven Soderbergh. It's like a complex jigsaw puzzle put together with brilliant accuracy.

The film has everything going for it, from the direction to the editing to the acting - there are performances par excellence. The music has an eerie quality to it, which seems to set the balance to the quiet urgency that punctuates the film. And the suspense in the flick is almost Hitchkockian, with a few scenes having the same effect as a couple from The Godfather.

While the film undoubtedly has more pros than cons, a couple of scenes have really been done to death, and we wish we hadn't seen them at all. For example, Douglas and his wife turning up at their daughter's rehab program is stuff that movies are made up of, and somehow really spoil the fun. And even the transformation of Zeta-Jones from a gung-ho society wife to the scheming consort of a drug lord is a bit too fast to digest.

All in all it's a great film, sneaky and suspenseful, and goes the whole nine yards. Only, it doesn't really come across with a strong stand in its moral. It is this that is a bit too cold for comfort. But then again, we've dealt with worse. Take a look around, and I'm sure you'll like the flick - even if it crawls along a bit.
Share. Save. Connect.
Tweet
TRAFFIC SNAPSHOT

ADVERTISEMENT
This page was tagged for
Traffic english movie
Traffic reviews
release date
Michael Douglas, Catherine Zeta Jones
theatres list
Follow @fullhyderabad
Follow fullhyd.com on
About Hyderabad
The Hyderabad Community
Improve fullhyd.com
More
Our Other Local Guides
Our other sites
© Copyright 1999-2009 LRR Technologies (Hyderabad), Pvt Ltd. All rights reserved. fullhyd, fullhyderabad, Welcome To The Neighbourhood are trademarks of LRR Technologies (Hyderabad) Pvt Ltd. The textual, graphic, audio and audiovisual material in this site is protected by copyright law. You may not copy, distribute, or use this material except as necessary for your personal, non-commercial use. Any trademarks are the properties of their respective owners. More on Hyderabad, India. Jobs in Hyderabad.