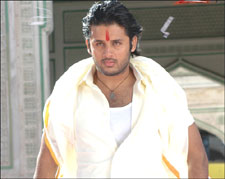 Sajid Hussain / fullhyd.com
EDITOR RATING
5.0
Performances
Script
Music/Soundtrack
Visuals
NA
NA
NA
NA
Suggestions
Can watch again
NA
Good for kids
NA
Good for dates
NA
Wait to rent it
NA
It seems the one thing on every emerging hero's to-do list is to make a film that can instantly elevate him in the popularity charts of the masses - with the same old stereotypical story that has long been known for insulting the intelligence of their audience.

Ram is yet another first-half-feel-good-second-half-flashback flick. It's a pity that actors in Tollywood are compelled to stick to the same old plot, interspersed with a bunch of power-packed dialogues to establish themselves in the industry.

Ram is a tale of a guy called, well, Ram (Nitin). With the usual gang of ragtag flattering him for his strength and uncommon virtue, our man goes about his life merrily singing, hanging out at chai joints and winning cycle racing competitions.

He is chosen as a brand ambassador for a bicycle manufacturing company owing to his immensely impressive cycling skills. The assignment requires him to visit Bombay to meet the CEO of the company to finalize the deal.

Meanwhile Janaki (Genelia), the younger daughter of Virendra (Atul Kulkarni), a mafia goon, happens to be a big-time devotee of Lord Ram. Sporting a salwar kameez all through the way, she spends most of her time singing hymns and praising the Him.

Ram later discovers that he and Janaki share a gloomy past. Enter Karim Bhai (Devraj), who reveals the story of Dasaradharamapura and its founder Dasaradha Ramaiah (Krishnam Raju), to Ram.

Ramaiah, a Good Samaritan, is hacked to death by a goon hired by his son-in-law Virendra. Mayhem ensues, and all the occupants of the locality eagerly await the return of his grandson Ram to avenge the death of his grandfather, and restore peace and prosperity in the region. The rest of the film deals with how Ram wields the dagger and takes revenge on Virendra and his aides.

The major drawback with the film is the complete lack of novelty. The same old alliterative dialogues, the amateurish portrayal of Hindu-Muslim unity, the monotonous apotheosis of a boyish-looking protagonist and the stereotypical characters makes the flick so very dreary.

The music is just ordinary. Nitin has taken a big leap forward as far as his dancing skills are concerned. He twists and swirls and hops and jumps with incessant ease. Some of the action sequences, intensified by a fuzzy background score and a neat choreography, have been shot really well. It's a visual treat for the guys who dig power packed fight sequences.

Genelia looks bubbly and sweet, and Hrishita provides the glamour quotient. The comedy track by Venu Madhav, Dharmavarapu and Brahmanandam is loud and very ineffective.

All in all, Ram is a very stereotypical film aimed at launching Nitin as a mass action hero. The role doesn't go along well with someone like Nitin. He has been prematurely elevated to Godhood. You wouldn't miss much if you don't catch this one.
Share. Save. Connect.
Tweet
RAM SNAPSHOT

ADVERTISEMENT
This page was tagged for
Raam 2006 movie story
raam telugu movie hd
raam movie nithin
Ram telugu movie
Ram reviews
Follow @fullhyderabad
Follow fullhyd.com on
About Hyderabad
The Hyderabad Community
Improve fullhyd.com
More
Our Other Local Guides
Our other sites
© Copyright 1999-2009 LRR Technologies (Hyderabad), Pvt Ltd. All rights reserved. fullhyd, fullhyderabad, Welcome To The Neighbourhood are trademarks of LRR Technologies (Hyderabad) Pvt Ltd. The textual, graphic, audio and audiovisual material in this site is protected by copyright law. You may not copy, distribute, or use this material except as necessary for your personal, non-commercial use. Any trademarks are the properties of their respective owners. More on Hyderabad, India. Jobs in Hyderabad.