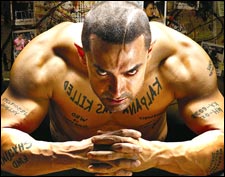 EDITOR RATING
7.0
Performances
Script
Music/Soundtrack
Visuals
8.5
4.0
8.0
9.0
Suggestions
Can watch again
Yes
Good for kids
No
Good for dates
Yes
Wait for OTT
No
It's surprising how many things Ghajini has going against it, and yet turned an implacable money-spinner in Tamil and, through the dubbed version, in Telugu. First, it's a tragedy (oh, it's all over the posters that Kalpana was killed), in more ways than one, and doesn't deliver the most eagerly awaited moment at all. Secondly, the whole short-term memory loss thing peaks at the concept stage - there isn't a single place in the movie where the execution has you jumping for joy for making sense.

Since very few people care to dispute any post facto theory for why something succeeded, we can bravely postulate that the positives just about outweigh the negatives. And there is mostly only one positive in the Hindi version: Aamir Khan. You haven't seen him in a year after a movie that stole all hearts, he has a reputation for not doing any routine masala flicks, and he knows how to market his films. Indeed, a ticket for an Aamir Khan movie feels pretty much like a slot in your calendar labelled vacation - the anticipation itself adds to the experience.

So most of the reason you enjoy Ghajini is how much you've been made to await it. The film itself barely rises above being different. It's hard to handle a concept like that because basically it is impossible to handle a concept like that. A person with memory loss every 15 minutes cannot ever bring down an underworld don single-handedly, and starting to write a script about how he does is an exercise where you stay in denial.

Indeed, audiences don't question you when you show a hero beating up 10 goons, and they don't question you about where the extras are coming from to dance in a song (and why), but they will question you about how a person doesn't run out of his 15 minutes in just the recap of all that he did in all the zillion 15 minutes until then. That's the problem with writing scripts audiences aren't used to, or making a non-masala movie - you have to make sense. Ghajini's script completely lacks in giving you clarity on how exactly its protagonist reaches the villian despite a huge handicap.

Ghajini, for the uninitiated, is the revenge tale of a man Sanjay (Aamir Khan) who has short term memory loss - he forgets everything every 15 minutes. And this leads to a nightmare for you in trying to accept what's happening in the movie. The film prefers to stay vague about if he remembers whatever's happened in his life before the incident which led to this condition, or if he forgets everything every 15 minutes. It appears from some late scenes that the latter is the case, in which case nothing in the film makes sense at all. And all those questions consume a good part of your capacity for entertainment.

Like we said, the heroine is killed, and the lack of a happy ending hurts watchability further. You also await eagerly the scene where Kalpana (Asin) finds out who Sanjay really is, but alas, that is never to be, either. And while the interactions between two are cheerfully comic and form the most watchable part of the film, the courtship lets you down (Sanjay just proposes to Kalpana one night, and she agrees the next morning though she hasn't thought about him that way until then), and you can also keep wondering why Kalpana choses to hang out that often with Sanjay anyway.

On the positive side, the movie has great production values, a hustled pace, good music (by Rahman), and, of course, Aamir Khan. Though there's not much scope for performance here for him (and he sometimes uses exaggerated mannerisms to get the point across that his memory has just gotten reset), it's a treat as has always been for a few years now, just to see him on screen. Asin is brilliant, too, and the performances in general are par for the course.

A South-Indian director means plenty of gore, and Ghajini has more violence than has been seen in Bollywood in a really long time. Still, all the instability created in you by all the hype and buzz around this one can have only one redressal, and that is watching it. If you are willing to overlook the inadequate scripting and overall tragic theme, there's plenty here to help keep yourself away from your life for a while. And at 3 hours, for a pretty long while.
Share. Save. Connect.
Tweet
GHAJINI (HINDI) SNAPSHOT

RATING
7
XLNC Aditya on 26th Dec 2008, 11:26pm | Permalink
This Hindi remake of the Tamil version of the English adaptation of a short story, is worth a watch, or maybe two! It has its shares of pros and cons...

Asin is the biggest plus, she is a reason to watch the movie...and Jiah Khan is there just to show us how beautiful Asin really is!! And then there is Aamir, he is good as the CEO but awesome as the Psycho. Rahman plays a great role in raising the interest even in dull moments.

One of the cons is the "KALPANA WAS KILLED" concept... sure kill her, but there wasn't the necessity to put all the gore and violence in the death. And there is the 3 hour length which also makes it less watchable...

Well I guess the 4/10 for the script is a bit harsh, yeah it lacks a bit of common sense as in most Indian movies but atleast its a bit fresh from the stupid movies that bollywood offers, and giving RNBDJ 5/10 for script is a fallacy... if that movie gets 5 this needs 50!!

Well its a shame if the FullHyd reviewer had watched the Tamil/Telugu version cause that would be a grave injustice and a flaw from any ones point of view!

All in all...forget the last 15 mins of your present memory (ie forget the FullHyd review and this comment) and go watch the movie for yourself...it isn't as bad as what FullHyd's review says it is, but it isn't as great as what I say it is either!!


Pros: Aamir, Asin, Rahman, Climax, Asin...yeah she's that good that I put her again on the list!!
Cons: Jiah Khan, Length and a script which could have been tightened!

ADVERTISEMENT
This page was tagged for
Ghajini (Hindi) hindi movie
Ghajini (Hindi) reviews
release date
Aamir Khan, Asin
theatres list
Follow @fullhyderabad
Follow fullhyd.com on
About Hyderabad
The Hyderabad Community
Improve fullhyd.com
More
Our Other Local Guides
Our other sites
© Copyright 1999-2009 LRR Technologies (Hyderabad), Pvt Ltd. All rights reserved. fullhyd, fullhyderabad, Welcome To The Neighbourhood are trademarks of LRR Technologies (Hyderabad) Pvt Ltd. The textual, graphic, audio and audiovisual material in this site is protected by copyright law. You may not copy, distribute, or use this material except as necessary for your personal, non-commercial use. Any trademarks are the properties of their respective owners. More on Hyderabad, India. Jobs in Hyderabad.