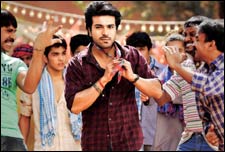 Deepa Garimella / fullhyd.com
EDITOR RATING
5.0
Performances
Script
Music/Soundtrack
Visuals
7.0
4.0
6.0
7.5
Suggestions
Can watch again
No
Good for kids
No
Good for dates
Yes
Wait for OTT
Yes
Bloated budgets and expensive pre-release PR aside, today's star-studded productions seem to have little going for them. Not attempting to break this monotony, Racha, smug in its "safety net" of the old Tollywood formula, makes a flamboyant entry into our theatres, with the same sights and sounds you've seen and heard in trillions of Telugu movies so far.

It is no exaggeration to say that pretty much everything about Racha is as generic as it gets. Yes, the movie shows how one-film director Sampath Nandi (who earlier masterminded a rather forgettable project) sure displays his grip over execution, but a work of art this is not.

First of all, this is a story that is as predictable as it is preposterous. Raj (Ram Charan Teja) is a betting addict who everyone is in awe of because he's just so awesome. He dances to songs extolling his father's blood, genes and DNA, and lives in a chawl-like setting, where the residents play cricket with wickets made from Pepsi cans.

Now his adopted father (M S Narayana) is suddenly diagnosed with liver cirrhosis, and is taken to Apollo Hospitals. You are then waiting for a Docomo advertisement to pop up from somewhere, but no - they decide to throw some real entertainment at us, real hard.

To get the money to save his life, Raj gets into a bet that involves the following: he must make Chaitra (Tamannah), the daughter of an evil mining baron Bellary (Mukesh Rishi), fall in love with him. But there's more to the story than a bet and a love story. There is the question of the past of everyone involved. In the end, after a dialogue aimed at a Chiranjeevi rival, scores are settled.

Every step in the plot is easy to foretell from 5 miles away. Yet, the humour helps, in places. Comedians Venu Madhav, Srinivasa Reddy, Taagubothu Ramesh, Brahmanandam, Ali and Jayaprakash Reddy are brought in for little bits of fun in the first half. They leave the scene in the interval, and with them goes all soul.

The second half is even more unoriginal, with a melange of roaring and scheming villans. There's an elaborate action scene supposedly shot in China, but save for being interesting to watch, it doesn't achieve anything. Songs are inserted at random places - which don't add any value, since these are some of Manisarma's blandest works. No, Bappida's Vaana Vaana doesn't count.

Overall, a large amount of beeping of dialogues, and the gore, might put off some people. There is also an endless flow of cheesy lines. The movie has been well-shot, though.

Indeed, one of this film's positives is its casting. Ram Charan is hero material, and perhaps scores over a few other star sons of his age in terms of voice, looks and screen presence. Tamannah looks good, and for many, ogling at her might be well worth the price of the ticket. Hopefully, she's not contented with bimbette roles like this one. The other actors in the film are all good, limited by monotonous roles.

Watch it if your ticket is sponsored, or if you have nothing better to watch.
Share. Save. Connect.
Tweet
RACHA SNAPSHOT 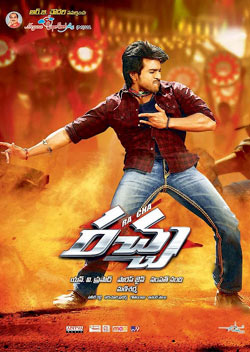 and as usual deepa garimella is the best critic of telugu cinema.. surpassing jeevi.. who has become quite biased of late due to his affiliations and association of idlebrain with the biggies..

and as usual deepa garimella is the best critic of telugu cinema.. surpassing jeevi.. who has become quite biased of late due to his affiliations and association of idlebrain with the biggies..

ADVERTISEMENT
This page was tagged for
RACHA MOVIE LATE
racha telugu full movie
Racha telugu movie
Racha reviews
release date
Follow @fullhyderabad
Follow fullhyd.com on
About Hyderabad
The Hyderabad Community
Improve fullhyd.com
More
Our Other Local Guides
Our other sites
© Copyright 1999-2009 LRR Technologies (Hyderabad), Pvt Ltd. All rights reserved. fullhyd, fullhyderabad, Welcome To The Neighbourhood are trademarks of LRR Technologies (Hyderabad) Pvt Ltd. The textual, graphic, audio and audiovisual material in this site is protected by copyright law. You may not copy, distribute, or use this material except as necessary for your personal, non-commercial use. Any trademarks are the properties of their respective owners. More on Hyderabad, India. Jobs in Hyderabad.