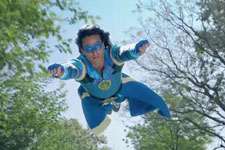 Jaiwantika Dutta-Dhupkar / fullhyd.com
EDITOR RATING
3.0
Performances
Script
Music/Soundtrack
Visuals
5.0
3.0
4.0
4.0
Suggestions
Can watch again
No
Good for kids
Yes
Good for dates
Yes
Wait to rent it
Yes
A Flying Jatt is that self-conscious joke people tend to crack at themselves sometimes. It should have been told with more conviction but it dilly-dallies with silly innuendos so much that it is too predictable to be interesting. While confusing the audience with some mismatching facts about Sikhism and Jats in particular, A Flying Jatt sets out on the promising premise of a Jatt superhero who emerges unscathed from everything that life tosses at him. While this was truly a nice thought to make a film on, the story line changes direction and goes haywire soon after.

A Flying Jatt brings new meaning to the term "upliftment". Aman (Tiger Shroff) is a meek Karate teacher living the simple life with his mother (Amrita Singh), his best friend (Rohit) and his romantic interest (Jacqueline Fernadez) who has friend-zoned him because he lacks the X-factor. Aman's at odds with an evil capitalist Malhotra (Kay-Kay Menon) who hires a crazy killer Raaka (Nathan Jones) to take him on. By a quirk of fate, Aman is transformed into A Flying Jatt, even while Raaka, with some help from Malhotra, manifests as a toxic monster out to make hell break loose.

It would have been great if the makers had focused on making The Flying Jatt a 100% entertaining superhero film, which it had the potential to be, instead of letting things start unraveling midway as they do. Blame it on faulty editing (Nitin) as well, but this movie tends to drag, especially post-interval. The second half of the film is rather different from the first - post-interval, the audience has to bear with a re-energized villain, thriving on the city's multiple toxins and growing stronger and more indefatigable by the minute. And a flawed superhero. The film isn't as comic-book-crazy as you'd expect it to be, maybe because it breaks out of the comic-book mould and crosses over into serious human-interest territory. Does this experiment work? Umm, not really. Does it sound preachy? Yes.

A flying Jatt also tends to grate on the nerves because of all the stereotypes it found so convenient to endorse. A wimpy alter-ego maybe one overdone thing, but a flawed superhero in addition is totally unnecessary. There's also another stereotype of Punjabis, yet another of the Punjabi mom (a role Amrita Singh has honed to perfection by now), the "best friend" stereotype, the Caucasian villain stereotype and the dumb heroine stereotype among several others.

You also spend a considerable amount of time wondering how the Jatt element is relevant to the movie. You're told "Jatt ke barah bajte hain jab woh doosre ke liye kaam karte hain". It seems like an ambiguous sentence a prophet spouted - it wasn't meant to be understood, and therefore isn't.

However, A Flying Jatt certainly has its plus points. The action sequences are impressive - both Tiger Shroff and Nathan Jones excel in well-executed, well-shot stunt scenes. There are some out-of-the-world dance sequences that could have done with some toning down in terms of VFX but look good thanks to nice choreography and the good-looking, hot-stepping leads. The actors lend credibility, and everybody from the lead pair to the villain is impressive in the film. Tiger Shroff and Jacqueline make a good pair onscreen.

Visually, the movie is a laugh riot. The actors move about in what seem like painted cardboard Doordarshan sets from the early years. Even the outdoor scenes, like one funny market sequence where The Flying Jatt tries buying bottlegourd from a vendor, seem contrived and unnatural. So much for good VFX.

The music (Sachin-Jigar) is about average, but nothing exceptional.

The Flying Jatt is basically behind the scenes footage of what it means to be a superhero. It's three hours of simply saying "This is work in progress!" Maybe we should just wait for the real thing. This one is totally skippable.
Share. Save. Connect.
Tweet
A FLYING JATT SNAPSHOT 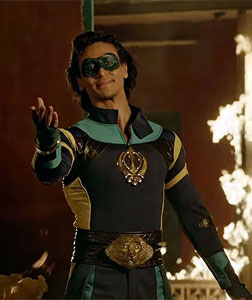 ADVERTISEMENT
This page was tagged for
hindi hd a flying jatt
A Flying Jatt hindi movie
A Flying Jatt reviews
release date
Tiger Shroff, Jaqueline Fernandez
Follow @fullhyderabad
Follow fullhyd.com on
About Hyderabad
The Hyderabad Community
Improve fullhyd.com
More
Our Other Local Guides
Our other sites
© Copyright 1999-2009 LRR Technologies (Hyderabad), Pvt Ltd. All rights reserved. fullhyd, fullhyderabad, Welcome To The Neighbourhood are trademarks of LRR Technologies (Hyderabad) Pvt Ltd. The textual, graphic, audio and audiovisual material in this site is protected by copyright law. You may not copy, distribute, or use this material except as necessary for your personal, non-commercial use. Any trademarks are the properties of their respective owners. More on Hyderabad, India. Jobs in Hyderabad.