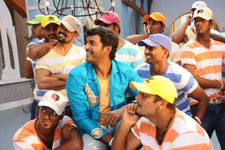 Ravi Kandala / fullhyd.com
EDITOR RATING
2.0
Performances
Script
Music/Soundtrack
Visuals
2.0
1.0
1.0
1.0
Suggestions
Can watch again
No
Good for kids
No
Good for dates
No
Wait for OTT
No
Ghajini is here yet again! No, not the Ghajini with the short-term memory loss made famous by Surya or by Aamir Khan, but the one we know from our history books as the one who made no less than 17 unsuccessful raids on India. The Ghajini here is Vishal, the Telugu guy who enjoyed a streak of success in Tamil and started dubbing all his movies into Telugu. It is a different story that none of his releases except his first two were hits. The man keeps making movies, and our producers keep releasing their dubbed versions.

Ghajini aka Vishal's latest attempt is titled Dheerudu. Dheerudu is directed by Bhoopati Pandian who made Bhayya with the actor earlier and follows exactly the same pattern as Bhayya. So the film starts with some sad comedy involving Shiva (Vishal) and Maryada Ramanna (Santhanam). Santhanam is a cook while Vishal plays his assistant. Santhanam gets into trouble due to some antics by Vishal and his friends and is forced to flee town.

He lands up in Vijayawada with Vishal and his cohorts, and tries to start a restaurant. Meanwhile, Vishal meets Aishwarya (Aishwarya Arjun), and as is his wont, falls in love with her, conveying his feelings with his standard stock expressions.

At the end of an outstandingly lousy first half, Aishwarya's family runs into trouble with a bunch of goons, and Vishal first flees from the goons before turning around and beating them all up single-handed and revealing that he is no cook but a murderer who's killed three people.

The second half then has a half-baked flashback involving the murder of a little orphan who Vishal cares for, and Vishal's revenge. How Vishal's past ties into his the problem faced by Aishwarya and her family, and how he solves all problems single-handedly, forms the rest of the second half.

There clearly is no attempt at writing a story or a screenplay here. We do not know about the Tamil original, but the quality of dubbing is so terrible that half the dialogues don't make sense. Vishal's family is quite obviously not willing to fund his misadventures now as otherwise, the one thing you could always expect from a Vishal movie was some decent dubbing. The lip sync makes you wonder if you are from an alien world where the movement of the lips has nothing to do with the sounds that emanate from them.

Boopathy Pandian picks up a story from the garbage can, and does not even attempt recycling it. There is no buildup to any of the scenes that show Vishal turning avenger. The comedy sucks, and the attempt at the 20-minute English comedy track runs for about 20 minutes longer than it should have.

Vishal does the same thing he's done in 16 movies so far. His 17th (and hopefully the last) attempt is under production, and is likely to be the same thing again.

Aishwarya Arjun, daughter of action king Arjun, has inherited none of his genes and is not even great eye candy. None of the remaining faces have anything worthwhile to do.

Thaman's tunes are terrible. In fact, if we hadn't read this in the credits, it would have been hard to believe that this is the Thaman we've gotten habituated to.

The picturisation is also weird. The technical values also seem to have taken a hit because of the budget limitations.

Ultimately, we can repeat what we said for Bhayya earlier - you can wait for this one's DVD to come out to watch it, but that would be stupid. Instead, just forget it.
Share. Save. Connect.
Tweet
DHEERUDU (VISHAL) SNAPSHOT 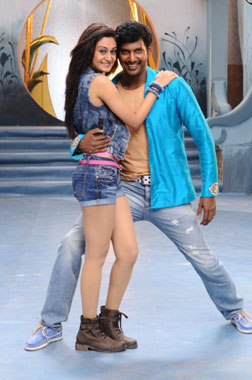 ADVERTISEMENT
This page was tagged for
Dheerudu (Vishal full movie online)
dheerudu visal full movie download
dheerudu vishal full movie online
vishal telugu movie on dheerudu download
dheerudu telugu movie download vishal
Follow @fullhyderabad
Follow fullhyd.com on
About Hyderabad
The Hyderabad Community
Improve fullhyd.com
More
Our Other Local Guides
Our other sites
© Copyright 1999-2009 LRR Technologies (Hyderabad), Pvt Ltd. All rights reserved. fullhyd, fullhyderabad, Welcome To The Neighbourhood are trademarks of LRR Technologies (Hyderabad) Pvt Ltd. The textual, graphic, audio and audiovisual material in this site is protected by copyright law. You may not copy, distribute, or use this material except as necessary for your personal, non-commercial use. Any trademarks are the properties of their respective owners. More on Hyderabad, India. Jobs in Hyderabad.