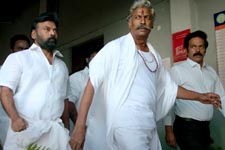 Sai Tulasi Neppali / fullhyd.com
EDITOR RATING
4.0
Performances
Script
Music/Soundtrack
Visuals
6.0
4.0
6.0
7.0
Suggestions
Can watch again
No
Good for kids
No
Good for dates
No
Wait for OTT
No
Macherla Niyojakavargam is the latest product to roll out of the Telugu Mass Movie Factory. Directed by M S Rajashekhar Reddy and produced under actor Nithiin's family banner Srestha Movies, Mancherla is another assembly-line clone stuffed to the gills with songs, dances, gags and fights.

A political rowdy called Rajappa (Samuthirakan) comes into power as MLA of Macherla by killing the son of his opponent Raja Babai (Subhalekha Sudhakar). Even 30 years later he continues to hold on to his seat, using terror tactics and threatening bloodshed if anyone stands against him. For Macherla's spooked citizens, free and fair elections have become a thing of the past.

Rajappa's son Veera (Samuthirakan again) too has taken after his father's goondaism, and hopes to continue his reign of terror. Macherla's redeemer comes in the form of our hero Siddhu Siddharth Reddy (Nithiin), a Vizag boy, an outsider whose job and love-life find him in the eye of the storm, in a head-on battle with Rajappa and his henchmen. Whether Siddhu succeeds in one-upping Rajappa and restablishing elections in Macherla is the non-mystery at the centre of this masala movie.

Siddhu, of course, is a superlative hero who has everything going for him. He aces the Civils and becomes an IAS officer. He is no "soft" government servant - he can single-handedly fell 30 hardened goons, and do it in style, too. While he awaits his posting (no points for guessing where he gets posted), he hangs around Vizag with his hot and rich childhood bestie Nidhi (Catherine Tresa). Nidhi throws herself at him, intent on marrying him, but Siddhu falls for an angel-faced girl called Swathi (Krithi Shetty) who can't resist his charms for long. Rounding up his near-perfect life are a doting mom (Indraja) and a chill dad (Murali Sharma). Oh, for comic relief his absolute buffoon of a neighbor, Guru (Vennela Kishore), will more than do.

Just as a god-like hero is one of central tenets of a Mass movie, so is a heroine who is in constant need of saving. In fact, it is only by rescuing women (or old or disabled people) that the hero's courage and skills are highlighted. Take for example Siddhu's intro scene where he rescues Nidhi from eve-teasers. He calls himself a GP, a "Girls' Protector", even though in the same breath he stalks Swathi and forces her to be his girlfriend.

Macherla's treatment of women feels especially archaic. Nidhi is shown as the sterotypical modern girl, dressed in short-shorts and croptops, while Swathi is draped head-to-toe in Sanskaari clothes. One of them finds love, the other functions as eye-candy. There is a running gag involving a woman getting spanked by her husband every time she misbehaves.

At the bottom of the totem pole, only a notch above a heroine's place, is that of the comedian. In Macherla, that poor sucker is Guru - a clueless egomaniac played by Vennela Kishore with absolute commitment. He is like a Whoopee cushion, a fart pillow, used anytime the script requires some levity. Some of his jokes do work - as a reset button - to help us forget the droll story underneath. But in certain gags where he is infantalized, as when he sucks his thumb, or gets beaten up naked, the cringe is very real. You can't help but sympathize with Kishore for the degradations he must bear for the greater good.

Reddy's story suffers from an utter imbalance. While the first half is filled with frivolity and flirtations, the second half has innumerable fights and bloodshed. Songs are shoehorned into the script at every chance, including an item number starring Anjali. By the time the bloated carcass of the story is dragged towards the finish line, it is about a half hour too long, and restlessness has set in. The final flourishes are rushed and unsatisfying, and the big moment barely registers. The dialogues are not particularly inventive, either. Nithiin's tagline is "vere level"; his slogan is "vote for change. vote for future." Bleh.

The scenes that do leave a mark are those that are stylistically well-crafted. Like one where a group of men in Cheetah costumes attack Siddhu. Or the pre-interval scene where Siddhu comes face-to-face with Rajappa.

Nithiin is no spring chicken, but thanks to his boyish looks, he is able to pull off action hero stunts with some flair. But his greatest flaws, that remain even 20 years after his debut movie, are his eyes. Nary a movement in his upper face when he emotes. Naturally, his acting is most effective when his eyes are hidden behind sunglasses. Tamil actor Samuthiarakar who plays Rajappa aces his performance as a villain. Every inch of his body spews terror - that brisk gait, the athletic body, the handlebar moustache.

Krithi Shetty plays a stifled Swathi, her dialogue-delivery plain and unmoving. Strangely, she seems a lot more alive in the songs. Catherine Tresa who plays the throwaway role of Nidhi has little to say, but a lot (of skin) to show. Murali Sharma, Indraja and Rajendra Prasad have small roles that they easily fill.

Macherla Niyojakavargam is doomed to be the shiny new toy for a day or two before it is unceremoniously tossed onto the dirt pile of trite cinema, and quickly forgotten.
Share. Save. Connect.
Tweet
MACHERLA NIYOJAKAVARGAM SNAPSHOT 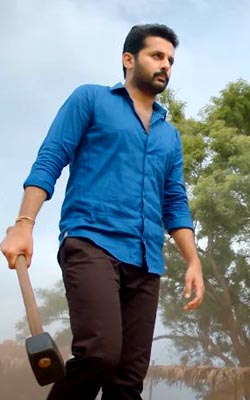 ADVERTISEMENT
This page was tagged for
Macherla Niyojakavargam telugu movie
Macherla Niyojakavargam reviews
release date
Nithiin, Krithi Shetty
theatres list
Follow @fullhyderabad
Follow fullhyd.com on
About Hyderabad
The Hyderabad Community
Improve fullhyd.com
More
Our Other Local Guides
Our other sites
© Copyright 1999-2009 LRR Technologies (Hyderabad), Pvt Ltd. All rights reserved. fullhyd, fullhyderabad, Welcome To The Neighbourhood are trademarks of LRR Technologies (Hyderabad) Pvt Ltd. The textual, graphic, audio and audiovisual material in this site is protected by copyright law. You may not copy, distribute, or use this material except as necessary for your personal, non-commercial use. Any trademarks are the properties of their respective owners. More on Hyderabad, India. Jobs in Hyderabad.