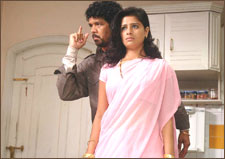 Deepa Garimella / fullhyd.com
EDITOR RATING
3.0
Performances
Script
Music/Soundtrack
Visuals
7.0
3.0
5.0
5.0
Suggestions
Can watch again
No
Good for kids
No
Good for dates
No
Wait for OTT
No
Mental Krishna comes up with an extremely offbeat and profound concept, and your immediate reaction to it is, 'nighties do not suit men'. Oh, okay, it also rakes up the issue of society's deeply ingrained gender-inequality patterns, including prevailing societal preference to protect the woman, and never the man. For the first half hour or so. The rest of the film is a headache waiting to explode.

The film is about the Muddu Krishna (Posani Krishna Murali), the eccentric son of a rich and famous businessman, who speaks loud enough to wake up the dead, and has been wearing the same langa-voni for every birthday of his, because his mother used to dress him up like a girl when he was a kid. Sathya (Sathya) is a well-educated, graceful, ambitious and confident woman who is strangely left at the altar by the humble ISB-admitted milkman she wanted to marry, and everyone generally agrees that Muddu Krishna will marry her, which he does.

Now, Muddu Krishna is the kind of new-age thinker who, when Sathya reaches to touch his feet, in turn reaches for her feet. No, we don't think you quite get the point. He tells her that whatever part of his body she touches, he will do the same to her.

Before she can reach for even his beard, he does 3 things in quick succession - come for the first night dressed in a nightie (if she can wear jeans because they're comfortable, why can't he? Exactly, you're catching on quick!); ask her outright if she's a virgin; and also tell her, with no euphemisms, that he isn't straight, with Raghu Babu as Bobby, his gay partner, for proof.

She is scandalized, but doesn't raise a hue and cry, partly because he threatens to tell the whole world that she is a 'characterless' woman, partly because she believes in the institution of marriage, and partly because someone thought that a woman getting felt up all over her body and gritting and bearing a psycho as a life-partner makes for a meaty role. No matter that it's the husband who keeps giving her all those meaty belly rubs and meaty other rubs, anyway, and it is he who wears all that nightwear, too!

His sadistic taunts (on her virginity, nothing less) know no limit. Hurled though they are in a creepily half-comical way, you just want to say 'This is not funny', when he gives Sathya a Nirodh packet when he sees her dressing up, and he thinks she might need it if she's going to be sleeping with other men (because, obviously, she woudn't be dressing up for a gay husband). He also asks his secretary (Brahmanandam) to sleep with her and check if she's a virgin. Why the otherwise liberated Sathya chooses to silently weep through all the slander, is a big question mark.

How long will Sathya cope with this agony? What really made Muddu Krishna so paranoid that he suspects her of even getting turned on by his father? Why, if he is indeed of the orientation that he generously parades around, does he even care? Where the hell is the social statement, other than 'The End'?

What starts out with social satire (mostly, woman-bashing) set to rake in quite a few cat-calls, falls apart into a 'life and times of a psycho husband', soon after Muddu Krishna marries Sathya. The music, the pace of the film, and Posani Krishna's hamming, bring home all that they probably wanted to - Mental Krishna gets on your nerves, mostly damagingly. Sathya is good, and she looks great in all those plain chiffons. Giribabu, Ranganath, Brahmanandam, and all the women have done well.

Who would sit through 2.5 hours of slander so vile and so excessive that by the time of the climax, even you would feel battered? The film is an affront to sanity, and it is scary to think that that might just have been the point of the whole effort.
Share. Save. Connect.
Tweet
MENTAL KRISHNA SNAPSHOT

ADVERTISEMENT
This page was tagged for
?????? ????? ???? ???????
?????? ?????
Mental Krishna Telugu movie film
Mental Krishna movie download
????? ?????? ???? ??????
Follow @fullhyderabad
Follow fullhyd.com on
About Hyderabad
The Hyderabad Community
Improve fullhyd.com
More
Our Other Local Guides
Our other sites
© Copyright 1999-2009 LRR Technologies (Hyderabad), Pvt Ltd. All rights reserved. fullhyd, fullhyderabad, Welcome To The Neighbourhood are trademarks of LRR Technologies (Hyderabad) Pvt Ltd. The textual, graphic, audio and audiovisual material in this site is protected by copyright law. You may not copy, distribute, or use this material except as necessary for your personal, non-commercial use. Any trademarks are the properties of their respective owners. More on Hyderabad, India. Jobs in Hyderabad.