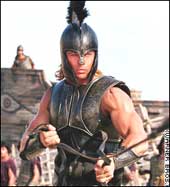 Charisma Murari / fullhyd.com
EDITOR RATING
6.0
Performances
Script
Music/Soundtrack
Visuals
NA
NA
NA
NA
Suggestions
Can watch again
NA
Good for kids
NA
Good for dates
NA
Wait for OTT
NA
Troy!
(The reviewer apologises for saying 'butt' where she meant 'but'. In her defence, she hasn't been able to think of much else all afternoon.)

Ah! The magnificent story of Troy,
Doctored, played with; as if a toy
The good-looking blonde, O he is a boy,
And he will show butt for he isn't coy.

Butt the blonde Brad, why is he even there?
Not to act, for he doesn't really care
To the character of Achilles he isn't fair
And like Aniston he looks a great share.

Butt, Achilles is a warrior who reigns supreme
The thought of 'immortality' makes his eyes gleam
The Spartan King wants him on his team
When Helen (his wife) leaves him and it isn't a dream.

She leaves with Paris, a prince of Troy
It's silly, it isn't even a ploy
Butt when thousands die for two, it does annoy
Butt not more than the bad lighting technicians in Wolfgang's employ.

And there will be war when a thousand ships
Sail with thousands of men and their hips
Towards Troy to make bloody dips
And loot temples for handsome tips.

Of Troy, who will be the saviour?
Hector, the older prince and his skirt-armour-gear
Brave he is and of nothing he will fear
Butt, he looks divine, and that's what makes him a dear.

So, when he dies, at the hands of Achilles
In a duel that makes you go weak at the knees
As the strength in your heart, you try to please
Every brow is raised and every forehead wears a crease.

Then the Trojan Horse creeps into Troy as it sleeps
The Spartans break loose, kill and burn while no one peeps
And Paris becomes a man, quitting his club of dweeps
As he kills Achilles with his bow, indeed your heart just weeps.

And that's the story of Troy
Doctored, played with; as if a toy
The good-looking blonde, O he is a boy,
And he shows butt for he isn't coy.
Share. Save. Connect.
Tweet
TROY SNAPSHOT

ADVERTISEMENT
This page was tagged for
Troy english movie
Troy reviews
release date
Peter O'Toole, Diane Kruger
theatres list
Follow @fullhyderabad
Follow fullhyd.com on
About Hyderabad
The Hyderabad Community
Improve fullhyd.com
More
Our Other Local Guides
Our other sites
© Copyright 1999-2009 LRR Technologies (Hyderabad), Pvt Ltd. All rights reserved. fullhyd, fullhyderabad, Welcome To The Neighbourhood are trademarks of LRR Technologies (Hyderabad) Pvt Ltd. The textual, graphic, audio and audiovisual material in this site is protected by copyright law. You may not copy, distribute, or use this material except as necessary for your personal, non-commercial use. Any trademarks are the properties of their respective owners. More on Hyderabad, India. Jobs in Hyderabad.