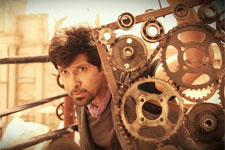 T J Reddy / fullhyd.com
EDITOR RATING
3.0
Performances
Script
Music/Soundtrack
Visuals
4.0
2.0
4.0
4.0
Suggestions
Can watch again
No
Good for kids
No
Good for dates
No
Wait to rent it
Yes
Around the 15-minute mark, 10 (TEN) shows you an atrocious scene without a smidgen of shame. The sequence begins with Shakeela (Samantha) getting into a go-kart. Ignoring a staff member's instructions, she puts the pedal to the metal. Because in this movie a go-kart can go from 0 to flying in less than a second, the kart flies out of the ring and lands on the street outside the structure.

You have just one question to the director going through your mind as you gently pull your jaw back from the floor of the theatre: Who are you, and what have you done with Vijay Milton?

The two films aren't too different structurally, though. Both are light on story. In 10 (TEN)'s case, we have a perpetually-chuckling super-driver played by Vikram. He is a man with no name because having is a character with no name is cool. He spends his days as either a driving instructor or a delivery person for the underbelly of society. One of his students is the, excuse my language, brain-damaged Shakeela. A girl so incompetent at driving that her first class ends with landing her car on the top of a tree. This really happens.

Going off some "reasons", which when revealed will make you want to punch the movie so hard that it will leave it seeing double, a gang of bad guys in Mussorie led by Daksha Bhai (Rahul Dev) and Pooran Singh (Abhimanyu Singh) want to abduct Shakeela. Discount Man With No Name protects her with his fighting, dancing, singing and driving skills.

If you were in Vikram's shoes, you may have let the bad guys win this one. They deserve a notch in the W-column once in a while. Does that make you a bad person or does that make the character of Shakeela utterly intolerable?

The movie says the character Vikram plays can solve any and all problems within ten seconds. I ask, could Vikram not have turned this script down after reading it for ten seconds and spared us his sleepwalking performance? If his performance in Mallanna was steadfastly stoic, his acting here is discordantly chirpy. He has no inflexion whatsoever.

If Vikram is hard at work lulling you to sleep, his female counterpart is resolute to not let you slip into your world of dreams where I'm sure better stories are unfolding. There is a difference between the cuteness of a naïve child and that of a quirky woman. Shakeela is a child trapped in a woman's body, and the movie makes you watch along as dead-eyed Vikram and child-like Samantha indulge in what the film thinks is courtship.

This courtship ritual is intermittently interrupted by the trio of bad guys played by Rahul Dev, Pasupathy and Abhimanyu Singh. Three bad guys who steal Tarantino dialogue and musical cues but have no sense of depth added to any of their characters.

On a side note, Vikram's character likes Shakeela because she shares many of his sister's traits. Refer to Freud or Jung or whoever specializes with the psychology behind this relationship because I'm not touching it with a 10-foot pole.

When a film does so much wrong in terms of story-telling (be it visually or otherwise), enjoying any other aspect of it is a task in itself. Any half-decent song sounds that much worse, an item number feels that much more unnecessary, and epic music accompanying the hero sounds unearned as the hero has done nothing particularly heroic except sit in front of a green screen inside a car set pretending to be a badass.

I say pretending to be a badass because the movie's CG work is atrocious. If a film's action set-piece reminds you of your days as a child playing with your Hot Wheels (with the same level of imagination and production value), the film is not badass in the slightest. That is a shame because most of the mellow sections sandwiching the action are crisply shot, edited and coloured even if a kinetic plot is nowhere to be found on the journey from Chennai to Mussorie.

That is where we stand with this movie. Because it explores a sub-plot with doppelgangers, I have a feeling that the movie was made by a group of doppelgangers pretending to be the film's cast and crew. Either the originals are tied up and stuck in a well somewhere or these guys took a bullet for the A-listers when Fox Star wandered up to their doors with this script. All I know for sure is Edgar Wright saw this film and set out to restore balance to the universe and made Baby Driver. And now the world is at peace.
Share. Save. Connect.
Tweet
10 (TEN) SNAPSHOT 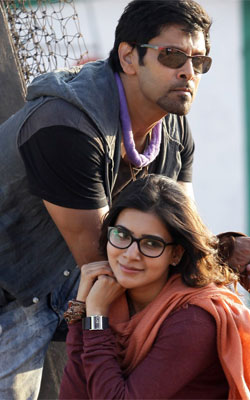 ADVERTISEMENT
This page was tagged for
den ten telugu
10 (TEN) telugu movie
10 (TEN) reviews
release date
Vikram, Samantha Ruth Prabhu
Follow @fullhyderabad
Follow fullhyd.com on
About Hyderabad
The Hyderabad Community
Improve fullhyd.com
More
Our Other Local Guides
Our other sites
© Copyright 1999-2009 LRR Technologies (Hyderabad), Pvt Ltd. All rights reserved. fullhyd, fullhyderabad, Welcome To The Neighbourhood are trademarks of LRR Technologies (Hyderabad) Pvt Ltd. The textual, graphic, audio and audiovisual material in this site is protected by copyright law. You may not copy, distribute, or use this material except as necessary for your personal, non-commercial use. Any trademarks are the properties of their respective owners. More on Hyderabad, India. Jobs in Hyderabad.