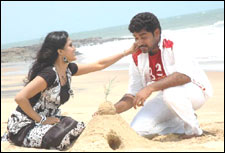 A young boy, Seenu, kills his father's mistress, and is jailed. After around a decade, he becomes Rajeev Kanakala, and after he is released, as his mother crosses the road to hug him, she gets tossed around by a dozen trucks, and hurtles to her death.

The grief-stricken Seenu mopes around, and in a fight sequence, he wins the heart of the flashy, curvy and rose-lipped Vasu (Harish), who introduces him to his family. His sister ties Seenu a rakhi, and his mother feeds him payasam. Vasu shows him his room. And Vasu takes him to a Friendship Day function. And Vasu offers to buy him a bike. And Vasu takes him to Araku Valley. And Vasu can't keep his hands off Seenu. Is this friendship? We hope so!

Seenu is smitten by a girl who he keeps seeing on the road and in the temple, but he has no clue of what her name is, where she lives, what she does for a living etc. Vasu knows Seenu is in love with this dame, Sandhya, but befriends her and even helps her out in her search for a subject for an biography she plans to write.

The villain plays with Seenu's head by telling him his friend is a traitor. Seenu doesn't believe it at first, but he too sees them 'moving closely', and is furious. First his father, then his mother, and now this. Why does Seenu always end up lonely? How come love evades him? Given the fun that all those couples, who pay to sit in dumps that screen duds like these, are having, Seenu might as well be on the other side of the screen.

On second thoughts, in that case, there would have been no dud to screen, and no dumps for couples to sit in and have fun, so Seenu does the mature and sensible thing and gets back to reality, and drives his Sumo - anonymously - over Vasu. Anonymously, because he wears sunglasses while doing it.

It turns out that Vasu was trying to make Sandhya fall in love with Seenu, but everyone misunderstood. Seenu, of course, knows nothing of all this, is still seething with rage at Vasu, and tries to court Sandhya, who doesn't know he's her 'subject'.

But Vasu is so nice that though he knows Seenu did it, all he's worried about is how he is doing. Is this love? We sure hope not!!! We don't want new and unconventional angles to this concept at this stage!

It takes a fatherly police officer (Bhanu Chander, who earlier made an appearance during Seenu's release from jail) to put 2 and 2 together and knock sense into everyone's head â€" 2 and 2 makes 4!

There's even a random comedy track involving 3 bachelors, a landlord, and a neighbour. The only memorable joke involves a bunch of garishly disguised policewomen administering the humongously-piped 'breeth analyzer' to a drunken MS, but that's a matter of personal taste.

The script moves in such a way that the first half hour is like a jigsaw puzzle with no pieces. But post interval, you start accepting even the hole on the screen as part of the script. It is sad to see Rajeev Kanakala try to make sense of this movie. The things they call songs in this movie, are nothing but a bunch of acoustic horrors. And shot on a shoestring budget, the visuals resemble the inside of a shoe - dank and smelly.

A rip-off, we must say, if you are required to pay to watch this one. And a rip-off even if you're paid to watch it.
Share. Save. Connect.
Tweet
NA ANEVADU SNAPSHOT

ADVERTISEMENT
This page was tagged for
na anevadu sen songs
na anevadu naa songs
naa anevadu
Na Anevadu telugu movie
Na Anevadu reviews
Follow @fullhyderabad
Follow fullhyd.com on
About Hyderabad
The Hyderabad Community
Improve fullhyd.com
More
Our Other Local Guides
Our other sites
© Copyright 1999-2009 LRR Technologies (Hyderabad), Pvt Ltd. All rights reserved. fullhyd, fullhyderabad, Welcome To The Neighbourhood are trademarks of LRR Technologies (Hyderabad) Pvt Ltd. The textual, graphic, audio and audiovisual material in this site is protected by copyright law. You may not copy, distribute, or use this material except as necessary for your personal, non-commercial use. Any trademarks are the properties of their respective owners. More on Hyderabad, India. Jobs in Hyderabad.