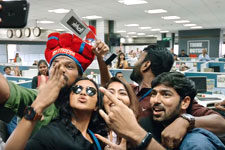 Neema Pramod / fullhyd.com
EDITOR RATING
6.5
Performances
Script
Music/Soundtrack
Visuals
8.0
6.5
5.5
6.5
Suggestions
Can watch again
Yes
Good for kids
No
Good for dates
No
Wait to rent it
No
Imagine waking up one morning in an abandoned building, with only the chirping of birds for company. There is absolute silence and stillness all around, and not a human soul in sight. You have a splitting headache, and cannot remember much about what had transpired the previous night. You look down at yourself and, to your horror, you discover that you have no clothes on. If this sounds like your worst nightmare, this is the reality of Kamini (Amala Paul) when she wakes up the morning after her birthday.

Kamini is everything the traditional Telugu film heroine is NOT. Up until that fateful day, her worst nightmare consisted of her being clad in a saree, wearing flowers and praying in a temple. She swears, drinks, smoke joints, parties all night with her male colleagues, and loves taking up challenges. She is confident, bold, outspoken, and has little consideration for the feelings of others. In short, Kamini is not a very likeable character. But thankfully, she is not caricature but a woman who is unapologetically herself. Well, if Arjun Reddy can be a hero, Kamini should be allowed to be a heroine.

Kamini and her friends work in a news channel. While her mother (Sriranjini) wishes to see her as a news anchor demurely reading the news in a saree, Kamini prefers to dress up as Joker, Harley Quinn and so on, and prank people on her prank show. The first half of the film follows her as she goes about a seemingly normal day at work - arguing good-naturedly with her mother, teasing her colleagues and making bets. These portions might seem stretched for some, but they serve to establish Kamini's character, as well as of those around her.

After a hectic day of work, Kamini and co decide to celebrate her birthday by partying in their old office building, before they relocate the next week. All seems well at first, but as the night progresses, a few truths are unveiled and things begin to get ugly. The next thing Kamini remembers is waking up naked and alone in that building. From this point onwards, Aame becomes a survival thriller as Kamini struggles to escape the confines of the building with her dignity and honor intact.

Aame is one of the boldest films to have come out in the recent past. The movie - which had to face a lot of trouble before release - is sure to earn both accolades and brickbats for its portrayal of the protagonist. Any other film would have held Kamini responsible for what happens to her - citing her "loose morals" and "bad character". But this film does nothing but empathize with her situation, making the audience feel every inch of her helplessness, which in turn makes them root for her. Yes, she has made a lot of mistakes and has hurt a lot of people. But that alone does not make her evil - she is just a flawed human being like most of us.

The first half, as mentioned, might feel languid to some as there isn't much happening in terms of plot, but it will keep you entertained with its crackling comedy and sharp observations. Take the scene where one of Kamini's colleagues proposes to her. When she rejects him, he is shocked. "Then why do you always choose to ride on my bike?" he asks, bewildered. "That means I like your bike, not you!" screams an exasperated Kamini. Though this scene is played for laughs, it drives home the point that if a woman who behaves freely with you, it might not always be because she loves you, but since she considers you a trustworthy friend. The film is replete with such light but poignant scenes which provide a lot of food for thought.

This is exactly why the climax makes you feel cheated. The identity and motive of the person who did this to Kamini turns this otherwise subtle and nuanced film into a Mahesh Babu movie, with all the preaching and social messaging. The director uses this opportunity to rant about almost everything that is wrong with the social media generation - even if it is unrelated to the theme of the film. And Kamini's sudden change of heart isn't easy to buy, either.

Save for the climax, however, Aame makes for an interesting watch. The film really comes on its own in the second half when it morphs into a survival thriller, and from this point till the big reveal the movie keeps you hooked, with your heart slamming against your ribs.

And of course, there is Amala Paul's stupendous performance. She deserves every bit of praise and all the accolades that will come her way for even considering taking up a role like this. No actor would be willing to play a character where they would have to be naked for the entire duration of the second half, and no actor could have portrayed Kamini as wonderfully and honestly as she did.

The actors around her are good, too - especially Ramya Subramanian and Sriranjini. The music, by Pradeep Kumar and Oorka (a band), feels jarring at times, but works for most part. A special shout-out to Vijay Karthik Kannan's camera-work - especially for the dignity with which he has shot Kamini in the second half, without being voyeuristic even for a minute.

Even if Aame does not succeed entirely in doing what it set out to do, it is, as mentioned, a bold attempt which shows a mirror to society. And for that, it deserves to be celebrated.
Share. Save. Connect.
Tweet
AAME SNAPSHOT 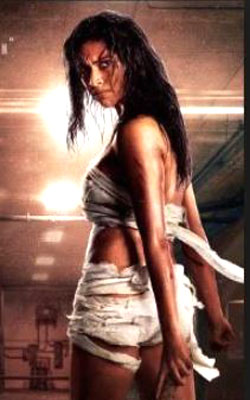 ADVERTISEMENT
This page was tagged for
aame telugu
Aame telugu movie
Aame reviews
release date
Amala Paul, Sriranjini
Follow @fullhyderabad
Follow fullhyd.com on
About Hyderabad
The Hyderabad Community
Improve fullhyd.com
More
Our Other Local Guides
Our other sites
© Copyright 1999-2009 LRR Technologies (Hyderabad), Pvt Ltd. All rights reserved. fullhyd, fullhyderabad, Welcome To The Neighbourhood are trademarks of LRR Technologies (Hyderabad) Pvt Ltd. The textual, graphic, audio and audiovisual material in this site is protected by copyright law. You may not copy, distribute, or use this material except as necessary for your personal, non-commercial use. Any trademarks are the properties of their respective owners. More on Hyderabad, India. Jobs in Hyderabad.