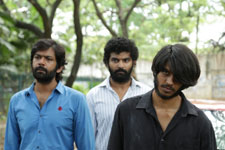 Kritika Deval / fullhyd.com
EDITOR RATING
5.5
Performances
Script
Music/Soundtrack
Visuals
7.0
4.0
7.5
7.5
Suggestions
Can watch again
No
Good for kids
No
Good for dates
No
Wait to rent it
Yes
Sometimes, on a hot summer day, you spot a lime juice stall on the road, and it beckons you. You make your way to it, buy a drink, and savor the tangy sweetness of your brief respite from the sun beating down on you. However, once that first sensory overload starts to wear down, you start to notice things. Things like the flies buzzing round the place, the grimy "ice" that made its way into your glass, and the all-around feeling that, maybe, the stall owner was taking advantage of their dominion over your senses to sell you a product that wasn't quite upto the mark.

Pisachi is that drink. Writer and director Mysskin is well-established in the Tamil film industry as someone who has the craft of translating ideas onto the celluloid to the T, and his expertise is apparent in every individual, beautifully constructed, highly nuanced scene. But, whether it is due to the invariably awkward dubbing, a culture gap, or just an overall loose hold on the bigger picture, Pisachi fails to engage.

The premise of this tale goes as follows. Siddharth (Naga) is a brooding and artsy violinist who tries to play the Good Samaritan to a mortally injured stranger named Bhavani (Prayoga Martin), but eventually fails as she dies on the way to the hospital bed, with Siddharth's hand tightly gripped in hers. A shaken Siddharth goes back to his bachelor pad to try and come to terms with his emotions, only to eventually find that there is something on the other side of the mortal veil that has crossed over to be with him, and that something, aka Pisachi, is the girl he tried his best to save.

The rest of the story hinges on why the spirit is hanging around, because while it is by no means a benign creature, its malice is not directed at the poor human it is trying to befriend. Their relationship is much like how a pet cat will offer its master a dead mouse in the hopes that it can teach the helpless human the truly important things in life.

This is a great idea that has been presented with a great amount of style. But perhaps the style comes at the cost of a story that speaks to its viewer, or even a set of characters that can capture your sympathy. By no means is Pisachi the sort of film that will keep you up at night, with the interest hinging on the mystery part rather than on the "ZOMG THERE'S A CRAZY GHOST OUT TO KILL ME!" angle. The ways in which Pisachi differs from your standard haunting flick are made pretty clear, from the first scenes that seem to be heading exactly where you're expecting right up until your expectations are systematically subverted, to the way so much of the flick focuses on the dynamic between the spirit and the protagonist. The film basically works on the basis that tropes exist to be subverted. But, then what?

Despite the focus on the whodunit angle, you're pretty clear on where the story is headed far too soon into the film, and the eventual big reveal is far too underwhelming to justify your sitting through a movie that seems far too interested in telling you how good it is, rather than, you know, being good. The buildup is too weak, and the plethora of rather interesting side-characters fail to be integrated fully into the plot. The jokes hit as often as they miss, but that probably has something to do with the fact that humor often has trouble traveling across cultural borders.

Despite the viewer's lack of interest in the whole tale, the film is still beautifully shot, and the quality of the camerawork often makes up for the bizarrely low production values. There is one song in the movie, and, unlike the movie's namesake spirit, it will haunt you. A beautiful melody vocalized by a child's pure tones, the song is as much a tribute to Illayaraja as it is a great thematic backdrop to the bipolar moods of the film.

Naga delivers a decent performance, but his role is too dimensionally deficient, not to mention pretentious, for you to be able to connect. Prayoga doesn't have much to do, but pulls off her role competently. The rest of the cast is pretty great, too, but is rather overwhelmed by micromanaging makers.

You might have heard that too many cooks spoil the broth, but Pisachi is the decent example of how the sole chef is probably not the best judge of their work. This is a sometimes fun film that is often just plain boring, and you should watch it only if your interest in watching something novel trumps your estimation of your attention span.
Share. Save. Connect.
Tweet
PISACHI SNAPSHOT 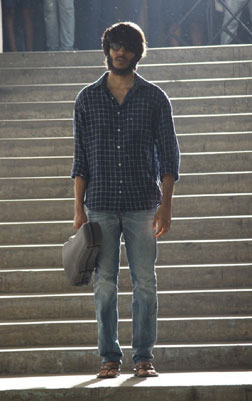 ADVERTISEMENT
This page was tagged for
Pisachi telugu movie
Pisachi reviews
release date
Naga, Prayaga Martin
theatres list
Follow @fullhyderabad
Follow fullhyd.com on
About Hyderabad
The Hyderabad Community
Improve fullhyd.com
More
Our Other Local Guides
Our other sites
© Copyright 1999-2009 LRR Technologies (Hyderabad), Pvt Ltd. All rights reserved. fullhyd, fullhyderabad, Welcome To The Neighbourhood are trademarks of LRR Technologies (Hyderabad) Pvt Ltd. The textual, graphic, audio and audiovisual material in this site is protected by copyright law. You may not copy, distribute, or use this material except as necessary for your personal, non-commercial use. Any trademarks are the properties of their respective owners. More on Hyderabad, India. Jobs in Hyderabad.