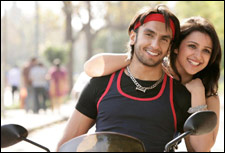 Deepa Garimella / fullhyd.com
EDITOR RATING
6.0
Performances
Script
Music/Soundtrack
Visuals
7.0
5.0
7.0
7.5
Suggestions
Can watch again
No
Good for kids
No
Good for dates
Yes
Wait for OTT
Yes
The ladies in Ladies Vs. Ricky Bahl are just fantastic. Ricky Bahl? Not so much.

Ladies Vs Ricky Bahl is a fun film driven by the verve of its women (a list of whose names reads like an Aadhar card application) - a heartening and encouraging fact. It's a film about a con-man, and as films about con-men go, there's plenty to nitpick about the plot. Yet, the girls stand their ground, show immense pluck, and generally have fun, in this get-back-at-the-crook game.

Ranveer plays a scam artist who specializes in swindling women of tens of lakhs of rupees. This trickster targets every kind - the innocent, the street-smart, the high-flying - and his modus operandi involves smooth-talking, flirting, and sob-story-telling.

Three of his victims (Parineeti Chopra, Dipannita Sharma, Aditi Sharma) get together and hatch a plan to nab him, that involves expert Home Town saleswoman Ishika (Anushka Sharma).

How Ricky Bahl (that, obviously, is our protagonist's name) cheats his victims is a combination of his own wit and, as Ishika remarks, the fact that his victims are such bird-brained pushovers. Indeed, who seals a Rs. 1 crore sale of an M F Hussain painting over the phone? And how are people so willing to carry around obscene sums of rupees in suitcases?

But then, to the film's credit, the pacing is energetic, and the con games are entertaining. The absence of heavy-duty emotional complications (save for the much-expected pairing of Bahl and Ishika) keeps the plot simple and easy-to-digest.

The film could have been an even more extended caper, with the ladies actually humiliating Ricky in the end, but it is not so. A romance starts blossoming between Ishika and Ricky, and is abandoned half-way.

It helps that the whole cast is fired up. Anushka Sharma enters the movie only a little before the interval, but she has an infectious vivaciousness last seen in Preity Zinta in her early days. She also has a bikini scene, by the way. Parineeti Chopra seems like fun, and Aditi Sharma (known to Telugu audiences through films that include Gunde Jhallumandi) is sweet.

There's little left for Ranveer to do, and he uses this time off to play eye candy, flaunting his abs and all. However, we must say, whether you dig him or not is a matter of personal taste. He is talented, but reminds you too much of Zayed Khan.

The songs are merely an accessory, and one or two may be belted out at nightclubs for a while. They're all there because they have to be around.

In all, this is a pretty-looking Yash Raj film, about 2.5 hours long, and harmless if you have time to murder pleasantly.
Share. Save. Connect.
Tweet
LADIES VS RICKY BAHL SNAPSHOT

ADVERTISEMENT
This page was tagged for
Ladies Vs Ricky Bahl hindi movie
Ladies Vs Ricky Bahl reviews
release date
Ranveer Singh, Anushka Sharma
theatres list
Follow @fullhyderabad
Follow fullhyd.com on
About Hyderabad
The Hyderabad Community
Improve fullhyd.com
More
Our Other Local Guides
Our other sites
© Copyright 1999-2009 LRR Technologies (Hyderabad), Pvt Ltd. All rights reserved. fullhyd, fullhyderabad, Welcome To The Neighbourhood are trademarks of LRR Technologies (Hyderabad) Pvt Ltd. The textual, graphic, audio and audiovisual material in this site is protected by copyright law. You may not copy, distribute, or use this material except as necessary for your personal, non-commercial use. Any trademarks are the properties of their respective owners. More on Hyderabad, India. Jobs in Hyderabad.