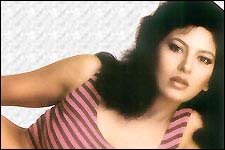 Rohit Murari / fullhyd.com
EDITOR RATING
1.0
Performances
Script
Music/Soundtrack
Visuals
NA
NA
NA
NA
Suggestions
Can watch again
NA
Good for kids
NA
Good for dates
NA
Wait for OTT
NA
There is not much we can say about this movie except that reviewing it felt like a good idea at the time. That, and a ruse to use a flaming picture to boost our traffic a few notches.

Movies of this genre have, through generations, been made the same way with the same content every time - violence and sex interspersed with dialogues like Woh To Bechari Armaanon Ki Chita Par Leti Zillat Ki Saansein Le Rahi Hai, which crack you up each time.

Pooja (Shalu Singh) is in love with Rahul (Sunny Mehta) and the two of them just cannot keep their mouths off each other's. Their hands, though, are put to good use holding down her skirt preventing any glimpses of underwear that the audience was fervently hoping for.

During one such session of groping and grabbing, three of Rahul's friends come into the room. Supposedly overcome with the extreme apathy of their contrived lovemaking, they decide to liberate their friend from his misery by stabbing him in the stomach. Only in the very next scene do we discover that their intentions were questionable.

They did not kill him out of compassion. No, these three guys killed him because he was such a sad actor. That, by itself, is not a crime. But, the trio was so much sadder that Rahul looked good. Also, it had already been half-an-hour into the movie and the heroine still had not been raped. Pooja knew this was no less than divine intervention. Now, she was clearly the best actor in the movie.

After the inevitable rape, happen the inevitable flashbacks. We are told the story of Pooja's mom, Anju, and her rapist, Nagoba (Pankaj Berry). Anju and Mohan (Javed Jaffri) were in love. Manoj (Mohnish Behl) lusted after her. Anju is raped and impregnated, as has been tradition in this genre, with her clothes on. Somewhere along the line Anu (Archana Puran Singh) goes on a killing spree, clad in latex.

But, Anu misses Nagoba. Anju does not. Ah, the perks of being a relatively known actor! They can decide when they have had enough with the movie and respectfully die. Nagoba's friend accepts Pooja as his daughter and they go around town looking for Pooja's rapists. They find them. She seduces them and hacks off their genitalia. That about ends the movie.

It also signals an end to two hours of time most wasted, and that is a positive I am going to take from this movie.
Share. Save. Connect.
Tweet
SHOLA SNAPSHOT

ADVERTISEMENT
This page was tagged for
Shola hindi movie
Shola reviews
release date
Shalu Singh, Sunny Mehta
theatres list
Follow @fullhyderabad
Follow fullhyd.com on
About Hyderabad
The Hyderabad Community
Improve fullhyd.com
More
Our Other Local Guides
Our other sites
© Copyright 1999-2009 LRR Technologies (Hyderabad), Pvt Ltd. All rights reserved. fullhyd, fullhyderabad, Welcome To The Neighbourhood are trademarks of LRR Technologies (Hyderabad) Pvt Ltd. The textual, graphic, audio and audiovisual material in this site is protected by copyright law. You may not copy, distribute, or use this material except as necessary for your personal, non-commercial use. Any trademarks are the properties of their respective owners. More on Hyderabad, India. Jobs in Hyderabad.