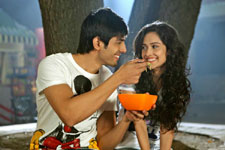 The story of Akash Vani (as we saw it): Two and a half hours that stretched into an eternity of mooning eyes and awkward silences and the camera's strange fixation for Nushrat Bharucha's face. Seriously, there are loo breaks aplenty to be found in this film, about 6-7 minutes at a stretch every time people stop talking.

Coming from the makers of Pyaar Ka Punchnama, a film that was surprisingly astute about what makes relationships tick, Akash Vani scores just as well on the same front.

The problem lies in the fact that there is too much of it. Too much bubblegummy college romancing. Too much Sati Savitri style sacrificial melodrama. And, definitely way too much time spent on introspection.

Akash Vani is a romance that goes beyond the rose tints of first love, into real life. In real life, sisters run away from their own weddings, and you're left with no choice but to go through with a hellish marriage to avoid blemishing your family's reputation. In real life, a spouse can abuse you in ways so insidious they seem silly when put into words. In real life, nothing is ever black or white.

Akash Vani could've been a wonderful film. It feels fresh. The dialogue is engaging, if you don't mind the slightly OTT feel of the '90s-style shayari-type lines. The camera is generous to everything it sets its lens on, whether it be Dehradun, Delhi, or London. The lead pair make up with their performances for the lack of maturity of their looks. There is not a single character more than is absolutely necessary.

However, the same cannot be said of the screenplay. That takes its own sweet time, like a dog that insists on stopping every once in a while to maybe bury a bone or something, while its master tugs insistently on the leash. The makers could've cut down the film's time by half, and come out with truly excellent cinema.

The attempt at portraying the suffocation caused by traditionally patriarchichal societies is genuine, and gets full marks for sincerity, if not for execution.

The music plays a big part in setting the mood, and is very pleasant.

Nushrat Bharucha shows promise, and would've made a much bigger impact is she didn't have to stare off into the space so much, while the camera focuses on her fine features. Kartik Tiwari is cute as hell, and has a really really tough time looking grown-up.

If a movie could get by on intentions alone, Akash Vani would score full points. However, movies, in order to work, also need to not be boring, at which this one fails miserably. You can watch the film once if you absolutely need your quota of icky and gooey in a cinematic world crowded with "thrillers" and "socio-fantasies" and other gore-fests. You would be wiser to wait for it to show up on TV, when in it would be easier for you to get up and leave every time you feel like dozing off.
Share. Save. Connect.
Tweet
AKASH VANI SNAPSHOT 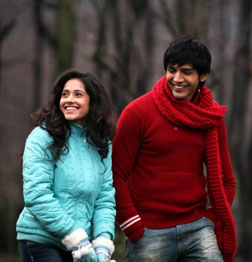 ADVERTISEMENT
This page was tagged for
akashvani telugu movie language:en
Akashvani photo
akach vani
Akashvani photos
Akach vani
Follow @fullhyderabad
Follow fullhyd.com on
About Hyderabad
The Hyderabad Community
Improve fullhyd.com
More
Our Other Local Guides
Our other sites
© Copyright 1999-2009 LRR Technologies (Hyderabad), Pvt Ltd. All rights reserved. fullhyd, fullhyderabad, Welcome To The Neighbourhood are trademarks of LRR Technologies (Hyderabad) Pvt Ltd. The textual, graphic, audio and audiovisual material in this site is protected by copyright law. You may not copy, distribute, or use this material except as necessary for your personal, non-commercial use. Any trademarks are the properties of their respective owners. More on Hyderabad, India. Jobs in Hyderabad.