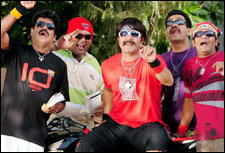 Harsha Vadlamani / fullhyd.com
EDITOR RATING
4.0
Performances
Script
Music/Soundtrack
Visuals
5.0
3.0
5.0
6.0
Suggestions
Can watch again
No
Good for kids
No
Good for dates
No
Wait to rent it
No
A young Ranga discovers that corrupt police officers do not report robberies at their houses because of the izzat question, and also because the money had been earned through dubious means. This is perhaps the only interesting part of Ranga The Donga - watching Ranga develop his modus operandi. As Kota Srinivasa Rao would have said, "Then started trouble."

Ranga (Srikanth), a thief, lives with his old guardian (Telangana Shakuntala) in Stuartnagar, a small basti in Hyderabad, comprising mostly of thieves who have relocated from Stuartpuram. He loves faction films set in Rayalaseema, and falls in love with a lady cop from Konaseema, SI Mangamma (a ridiculous-looking Vimala Raman in police uniform and jasmine gajra).

One day at a criminal court, while Ranga and his friends are awaiting transportation to the jail, a factionist named Bhavani Prasad is killed in a bomb attack. As the camera zooms onto what looks like amateur photoshopping, Srikanth is staring at a dead Prasad, who happens to be his look-alike.

Post-interval, it's time for a customary flashback episode where Srikanth's mother, a pregnant woman, parts ways with her NRI-turned-factionist husband and elder son, hoping to raise her second child as a normal citizen. Attacked by her husband's rivals even as she is leaving the village, she delivers a baby whom she hands over to Telangana Shakuntala before dying.

Needless to add, the elder son is Bhavani Prasad, and the younger one is Ranga. Bhavani Prasad's widow, Surekha (Ramya Krishna), has Ranga whisked away the family's hometown, and asks him to impersonate Bhavani Prasad and fulfill the latter's dream of providing irrigation to the region. How Ranga fulfills his brother's dream and kills the baddies makes for the rest of the movie.

This is the second film for director G V Sudhakar Naidu - his first, Hero (starring Nitin and Bhavna), had been a dud. Though the movie starts off on a rather promising note, the director loses his way quickly enough. Inconsistencies and clichés run galore, and the sense of déjà vu is omnipresent. Vimala Raman's Konaseema accent is irritating, and in keeping with the attention to detail standards of the movie, is limited to the first 15 minutes, after which she miraculously speaks without the accent.

Also, all the "Rayalaseema is not what you see in movies" tripe in the first half is proven to be a sham in the second, where the director only has all things seen ad nauseum in Seema movies, to offer. Women kill baddies in full public view, and men walk around in clothes splattered with blood in this charade. GV, who also plays Rattayya, a confidante of Bhavani Prasad, tries talking of social good and the sufferings of commoners because of factionists, but only ends making a mockery of everything, including the art of filmmaking itself.

Srikanth, despite the lackadaisical script and uninspiring role, tries hard to shine. Vimala Raman's role looks rather cheap, and is so limited in scope that she barely gets 3 minutes of talktime in the second half. Ramya Krishna, in what is being hyped as a Neelambari-like performance, is limited to staring intensely at the audiences while all her men go on a rampage in the background.

Chakri fails to impress, both as the music composer and as the guest actor. The camera work by Poorna is fuzzy - the camera fails to focus properly on many occasions, and the mindless visual effects only add to the chaos. It is rather surprising to see some dialogues, such as the one with 'C K Jain', not muted by the censors. Not that there's much to be said about the rest of them anyway.

ADVERTISEMENT
This page was tagged for
Donga the ranga Telugu movie download
ranga the donga full movie
ranga the donga movie download
Rangha dhongha telugu muvi full download
Ranga the dhonga full movie in movieruz
Follow @fullhyderabad
Follow fullhyd.com on
About Hyderabad
The Hyderabad Community
Improve fullhyd.com
More
Our Other Local Guides
Our other sites
© Copyright 1999-2009 LRR Technologies (Hyderabad), Pvt Ltd. All rights reserved. fullhyd, fullhyderabad, Welcome To The Neighbourhood are trademarks of LRR Technologies (Hyderabad) Pvt Ltd. The textual, graphic, audio and audiovisual material in this site is protected by copyright law. You may not copy, distribute, or use this material except as necessary for your personal, non-commercial use. Any trademarks are the properties of their respective owners. More on Hyderabad, India. Jobs in Hyderabad.