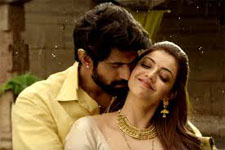 T J Reddy / fullhyd.com
EDITOR RATING
6.0
Performances
Script
Music/Soundtrack
Visuals
6.0
7.0
4.0
7.0
Suggestions
Can watch again
Yes
Good for kids
No
Good for dates
Yes
Wait for OTT
No
There's an old Quentin Tarantino interview in which he proselytised, and I'm paraphrasing here: "I'd never stick around too long as a director, as with a higher number of films to one's name coupled with advancing age and technology, an older filmmaker is bound to lose his/her touch and edge."

This statement rings true in many cases as only the cream of the crop in the field of directing can weather the ever-changing film industry and manage to stay relevant over the course of a few decades by reinventing themselves constantly. Telugu mainstream cinema's indie-flavoured filmmaker Teja has clearly not been one of them. A true maverick at the commencement of his career (delivering blockbusters laced with social commentary such as Chitram, Nuvvu Nenu, Jayam and Nijam), he slowly started to fall victim to the ravages of time. His insistence on working with fresh faces while keeping away from the bigwigs of the mainstream eventually took a toll on his career.

The man has now made an attempt to reinvent his modus operandi as a filmmaker by working with known stars and writers, and a reputed production house, with hopes of aiding an ailing career. Nene Raju Nene Mantri tells the story of a corrupt politician Radha Jogendra, tracing his meteoric rise and sickening fall as he loses his innocence and puts the sweet relationship that he shares with his doting wife in jeopardy. Jogendra is a hot-headed, short-tempered and amoral leader who is surrounded on all sides by cookie-cutter Tollywood politicians and two "attractive" women of whom one, the wife, is reliably sari-clad and the other is not. If you know the cast of the film, you know who's who, and have a pretty clear idea about their character traits while you are at it.

While not being a broad comic satire like a Sudigadu or a Hrudaya Kaleyam, Nene Raju Nene Mantri is a belting, darkly funny satire about the state of our country, our heroes and Tollywood itself. The film cleverly masks its true intentions over a nearly opaque veil of mass cinema clichés. With loud noises, needless murders, downright silly political manoeuvring, gratuitous navel and thigh shots, and childhood romances, the film offers up a biting critique of every one of the nation's citizens and of the industry it is so lovingly a part of.

Teja pays homage to ace director Brian De Palma as he apes the latter's shot selection and sequences through the course of his latest effort. He showers the film generously with clichés while consistently questioning the audience if this specific main character is actually the man they would want to root for. A man who cheats on his wife, kills underused character actors, has a wife who has no character traits other than being his wife, obliterates underdeveloped bad guys in cold blood, has unquestioned public adulation even if he confesses to being a horrible person etc. is the character we are presented with, and the film cleverly challenges its audiences while expressly trying not to talk down to them.

This is an outrageously hard tight rope act to pull off, and the movie does falter at crucial junctures. As mentioned before, the mass movie clichés numb the film's subtle subtext when push comes to shove. The film itself has a suffocating plot with no breathing room, and when this is coupled with very few memorable characters, it creates a recipe for an above average film-watching experience in place of an exceptional one.

One specific reason this movie rises above the soul-crushing status quo of Telugu cinema is the over-the-top yet gripping performance by its star Rana Daggubati. That skinny, lanky lad who was a bad actor in his debut Leader has grown by leaps and bounds after spending about 5 years on the sets of Baahubali. His larger than life screen presence, diction, deep voice and subtle mannerisms (which almost invisibly pile on with the progression of the film) all work together to create audience investment.

However, every other character in the film is either one-note or wholly throwaway. And when you pool that with the other flaws of the film such as ill-placed and forgettable songs, a jarringly loud score, extremely hoke-y CGI work which boasts of Telugu cinema staples such as flying cars and tearing shirts, you ask myself, "How much of this is a part of the satire and how much of it is actual ineptitude?" Could anyone but director Teja answer this question accurately? I doubt it. If I had one desire as I made my way out of the cinema hall, it would be to sit myself down and pick the filmmakers' brains.

I want to know if under all the excess that ended up in the final cut, the filmmakers lost a much cleverer satirical film which was in the vein of The Cornetto trilogy. As I watched the audience in the cinema comically laugh at a scene fuelled by supposed righteous emotion, I knew the film had connected with them at a level that most of them couldn't adequately explain. This movie is genius in the rough as it seemingly plays for the cheap seats but upon closer inspection has more than enough meat to chew on for the thinking man a la The Princess Bride.
Share. Save. Connect.
Tweet
NENE RAJU NENE MANTRI SNAPSHOT 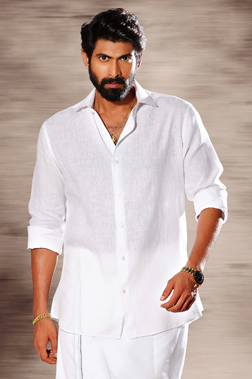 What exactly do you think the wife should have been, other than just a wife, in a story that revolves around her relationship with her husband, who began this game to avenge her loss, whose self destructive behavior is opposed by her as a moral compass, and finally whose love and death ends his journey and making him a better man again. This is a love story in a political backdrop, and I want that one trait she could have had without disturbing the integrity of the story.
TJ Reddy on 24th Aug 2017, 1:57pm | Permalink
Well, that is not an ideal way of judging writing in this film. From a serious stand point, a character who calls himself Radha Jogendra needs more Radha to justify that moniker. Radha, an integral part of his character, needs more than what was offered to her in terms of making her compelling.

On the satire level, this is absolute gold. The guy himself does not end up being a better man. He kills close to a 150 people, accepts to cheating on his wife, politicises his wife's death, mocks the public and in-turn the audience for commending his behaviour.

The actual goal of this style of presentation is to genuinely gauge how much horrible behaviour an audience can tolerate before abandoning the lead character as the protagonist of the film.

I would like to think the underwritten character of the wife is a conscious choice.

ADVERTISEMENT
This page was tagged for
Nene Raju Nene Mantri full movie download in telugu#ip=1
nene raju nene mantri telugu full movie
nena raju nene mantri photos
nena raju nena mantri full movie telugu
nenu raju nenu manthri movie hd telugu
Follow @fullhyderabad
Follow fullhyd.com on
About Hyderabad
The Hyderabad Community
Improve fullhyd.com
More
Our Other Local Guides
Our other sites
© Copyright 1999-2009 LRR Technologies (Hyderabad), Pvt Ltd. All rights reserved. fullhyd, fullhyderabad, Welcome To The Neighbourhood are trademarks of LRR Technologies (Hyderabad) Pvt Ltd. The textual, graphic, audio and audiovisual material in this site is protected by copyright law. You may not copy, distribute, or use this material except as necessary for your personal, non-commercial use. Any trademarks are the properties of their respective owners. More on Hyderabad, India. Jobs in Hyderabad.