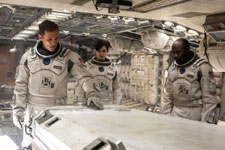 Kritika Deval / fullhyd.com
EDITOR RATING
8.5
Performances
Script
Music/Soundtrack
Visuals
9.0
7.0
8.0
9.0
Suggestions
Can watch again
Yes
Good for kids
Yes
Good for dates
Yes
Wait for OTT
No
Cooper (Matthew McConaughy) and Amelia (Anne Hathaway) are on Miller's Planet in a faraway galaxy accessible only through a wormhole near Saturn. This planet is, as far as we can see, full of water, and revolves around Gargantua, a collapsed star. Giant tidal waves manipulated by Gargantua have rendered the planet inhospitable, and Cooper's and Amelia's mission unsuccessful. This is only the first mission in the film, so you might think that is fine.

You would be wrong. You see, while the failure of the mission increased their stay on the planet by only an hour, back on Endurance, their spacecraft in orbit outside Gargantua's system, and on Earth, 23 years have passed, and Cooper gets there just in time to see a message from his daughter who is now the same age as him.

This is just one of a million ways in which space exploration in the near future could go awfully wrong. And yet, this is the heart of good, solid, science fiction churned out by the likes of Isaac Asimov, Arthur C Clarke, Ray Bradbury, Orson Scott Card and others, who, in their works, urged humanity that it was meant to outlive its home, and that the push towards the vast expanse of the universe, no matter what horrors it held, also held unimaginable wonders.

Interstellar is exactly that - good, solid, science fiction that is as expansive as it is introspective, as optimistic as it is fully aware of the horrors of what humanity can look forward to, whether they stick around on Earth, or leave behind a planet that is sure to become inhospitable to us while it gives rise to other life more suitable to it.

Cooper is a 40-something farmer who used to be an engineer and wants his son Tom (Timothée Chalamet - young, Casey Affleck - adult) to go to college. This, his school cannot allow as the world needs no more engineers or scientists or creators of any kind. This world, of mid-21st century, has turned into a generation of "caregivers".

When a series of seemingly improbable events leads Cooper and his daughter Murphy (Mackenzie Foy - young, Jessica Chastain - adult, Ellen Brustyn - old) to a super secret NASA facility, Cooper is introduced to Professor Brand (Michael Caine) and gets a chance to do something that excites him as much as it depresses him - a chance to go out into space, not just the solar system, but far, far beyond to explore three potentially inhabitable planets Miller, Edmunds and Mann, named after three scientists who are, in all probability, cryogenically frozen on those planets, just waiting for further missions.

Professor Brand, meanwhile, has two Plans for humanity - Plan A involves his doing something called "solving gravity" to save the existing human race by getting it onto one of those planets or a space station, while Plan B is to breed humanity onto one of those planets via thousands of frozen fertilized eggs. Cooper means to make sure that Plan A is what happens, and off he goes into space on Endurance, an experimental space-craft that fakes gravity, along with Amelia, Romily (David Gyasi), Doyle (Wes Bentley), TARS (Bill Irwin) and CASE (Josh Stewart). The latter two of this team are repurposed military robots that remind you, rather unnervingly, of the sinister Monoliths in Stanley Kubrick's 2001: A Space Odessey despite having settings for humour and discretion.

In fact, Interstellar bears too many similarities to Kubrick's equally ambitious epic to be accidental. A little into the second half, Cooper finds himself getting sucked into a black hole, and, if you've seen 2001, the experience can be rather disorientingly alike.

However, while Kubrick's masterpiece was almost entirely speculative, Nolan pads this saga with plenty of impressive and accurate science aided by theoretical physicist Kip Thorne, who has also written a companion book to the film which this writer means to hunt down as soon as the rather difficult endeavour of making sense out of Interstellar is at an end.

Interstellar has a plot, but it is a plot that you are bound to lose track of about half an hour into the film. And then, it turns into an experience - a sometimes tedious, occasionally trite, but always exciting experience. Interstellar is also a story about a family. Emotional ties are given a surprisingly high place in this hard sci-fi venture, and will often have you sniffling when you least expect it.

Matthew McConaughy quite unapologetically takes the centre stand, and you are rather glad for it because he enters into his role with all of the maniacal enthusiasm you would expect of him. You are also glad of it when Anne Hathaway comes onto the screen because, while she's allright for the most part, she gets rather annoying when she is called in to turn on the waterworks.

Jessica Chastain is thoroughly brilliant, and you can't help but wish she were on screen longer. The rest of the cast does exactly what it is called on to, with not a single performance spoiling the mood of the film.

The graphics and the action, though, are where Interstellar stands out. For the most part, Nolan keeps it unnervingly plausible. It is only when he ventures into the realm of the unknown that things start getting rather nonsensical, but then, this is the unknown that we're talking about. Wormholes and blackholes, in this film, are rendered via working equations, and by all accounts, did not need creative licences taken with them to look stunning. Hans Zimmer's soundtrack is appropriately insane.

In all, Interstellar is poignant, exciting, funny, and, most importantly perhaps, optimistic. It asks the question, "Are we there yet?", and answers it with "No! So get off of your behinds and do something it!"
Share. Save. Connect.
Tweet
INTERSTELLAR SNAPSHOT 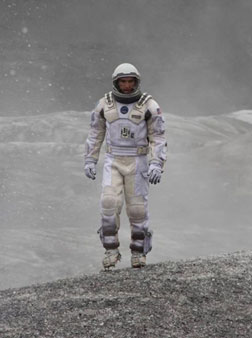 At one point you give up on this whole laborious process and almost come to the point of suspecting your own intellect. Even blaming and regretting on the quality of education you received at high school and university. But hold it at that. It's not your fault actually.

It's the whole system which taught us that movies are supposed to be humorous, make us laugh and entertain besides being easy to understand. Oh wait, but who is to decide, that, that is how a movie is supposed to be? Why should a movie always be a soft-drink like and why not like an Ayurvedic kashayam?
RATING
9
GBs on 29th Nov 2014, 9:51pm | Permalink
In spite of the reviewer's attempt to thoroughly chew the entire story, firsthand, make it pulpy, and serve it to your mouths for an easy ingestion, one might still feel lost while watching it.

At one point you give up on this whole laborious process and almost come to the point of suspecting your own intellect. Even blaming and regretting on the quality of education you received at high school and university. But hold it at that. It's not your fault actually.

It's the whole system which taught us that movies are supposed to be humorous, make us laugh and entertain besides being easy to understand. Oh wait, but who is to decide, that, that is how a movie is supposed to be? Why should a movie always be a soft-drink like and why not like an Ayurvedic kashayam?
Sabiya Hassan on 22nd Nov 2014, 10:58am | Permalink
Is movie with subtitles in hyderabad cinemas?
riyaz ahmed on 17th Jan 2015, 3:33pm | Permalink
Where it is
Booyakasha on 17th Nov 2014, 2:04pm | Permalink
While the film is quite brilliant, be prepared to have a lot of science thrown at you. Those of us unfamiliar with terms such as Singularity of a blackhole, 4 dimensions of space-time, event horizon, centrifugal force used to create artificial gravity and blah blah...would be put off but would end up not caring cos the plot really carries you along. However, the end was quite looney and I'm still trying to figure it out. Watch it for the CGI, the performances and epic scale that only Nolan can bring to us.
RATING
8
Murali on 10th Nov 2014, 7:57pm | Permalink
Kip Thorne's book "Interstellar: beyond time and space" is available at amazon.in for Rs.2,255/-
LEAVE A COMMENT
fullhyd.com has 700,000+ monthly visits. Tell Hyderabad what you feel about Interstellar!
MORE MOVIES
Latest Reviews
Dhaakad
Bhool Bhulaiyaa 2
Dhagad Saamba
Shekar
Jayeshbhai Jordaar
more
Sarkaru Vaari Paata
Doctor Strange In The Multiv...
Ashoka Vanamlo Arjuna Kalyan...
Runway 34
Heropanti 2
Acharya
Kanmani Rambo Khatija
Jersey (Hindi)
K.G.F. Chapter 2
Beast (Telugu)
Contemporary Reviews
Big Hero 6 (3D)
Rang Rasiya
Joru (Telugu)
Erra Bus
Pilla Nuvvu Leni Jeevitham
more
Kill Dil
6-5=2 (Hindi)
The Shaukeens
Brother Of Bommali
Jai Hind 2
Ouija
Current Teega
Fury
Gone Girl
Random Reviews
Himalay Ki Rani
Repallelo Radha
Road
Enjoy
Basic Instinct 2
more
Ankahee
Gudumba Shankar
A Wednesday
Ninja Assassin
Dil Toh Baccha Hai Ji
Businessman
Nannaku Prematho
LIE
Alita Battle Angel (Telugu)
Chandigarh Kare Aashiqui
SEARCH MOVIES
Dissatisfied with the results? Report a problem or error, or add a listing.
ADVERTISEMENT
SHOUTBOX!
{{todo.name}}
{{todo.date}}
[
ip{{todo.ip}}
]
{{ todo.summary }}... expand »
{{ todo.text }} « collapse
First  |  Prev  |   1   2  3  {{current_page-1}}  {{current_page}}  {{current_page+1}}  {{last_page-2}}  {{last_page-1}}  {{last_page}}   |  Next  |  Last
{{todos[0].name}}

ADVERTISEMENT
This page was tagged for
Interstellar english movie
Interstellar reviews
release date
Matthew McConaughey, Wes Bentley
theatres list
Follow @fullhyderabad
Follow fullhyd.com on
About Hyderabad
The Hyderabad Community
Improve fullhyd.com
More
Our Other Local Guides
Our other sites
© Copyright 1999-2009 LRR Technologies (Hyderabad), Pvt Ltd. All rights reserved. fullhyd, fullhyderabad, Welcome To The Neighbourhood are trademarks of LRR Technologies (Hyderabad) Pvt Ltd. The textual, graphic, audio and audiovisual material in this site is protected by copyright law. You may not copy, distribute, or use this material except as necessary for your personal, non-commercial use. Any trademarks are the properties of their respective owners. More on Hyderabad, India. Jobs in Hyderabad.