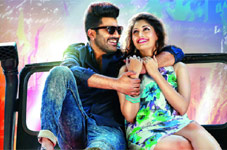 Express Raja is yet another road movie like the Gandhi's first. The film begins with Raja (Sharwanand) kidnapping a dog. He then begins to narrate why he had to kidnap a dog, and the story involves a girl Amulya who he's in love with, her pet dog Silky, her engagement to a politician Kesava Reddy (Harish Uttaman), Kesava's mother Uma Devi (Urvasi), and a host of other random characters. The plot involves four to five separate threads that eventually converge.

Express Raja features a carefully written screenplay that keeps putting in a twist every 15-20 minutes, introducing new characters who bring about the twist, and looping back to tell you how that particular character is connected to the story. It is certainly no mean task to write such a narrative - the audience might be confused by the multiple threads, and the director himself might lose track of where he left one story and picked up another. Gandhi, luckily, proves to be equal to the task of writing a crystal-clear flow that confuses neither his audiences nor himself.

Indeed, he keeps things interesting to a large extent, and adds dollops of humor at regular intervals to ensure things don't get boring or monotonous. Saptagiri, Shakalaka Shankar, Prabhas Seenu, Brahmaji and Sharwanand himself keep the gags running. The story also brings in a few aha moments in terms of how the different threads are interlinked.

Now to tell you where Express Raja fails, we need to tell you about Pulse candy - the new candy from the makers of Pass Pass. Pulse has a typical kachcha aam ka taste. Right at the end, though, there is a liquid filling that suffuses your mouth with some exquisite flavours and makes the initial effort of sitting through a regular aam candy worth it. Express Raja, similarly, has quite some build-up before its gags. Where the gags work, you don't complain, but when the payoff does not prove to be worth the buildup scene, the entire sequence gets wasted. About 40% of the film's gags fall into this category, and therein you get bored.

The performances are fine - no one underperforms in roles where they are clearly required to overact. Sharwanand has amazing timing and continues a run of fine performances, while Surabhi proves to be slightly more than a pretty face. Like we mentioned earlier, the comedians all do a fine job. Saptagiri, for one, does well after a long time.

The songs are all shot like glitzy music videos, and are easy on the eyes and ears - you will certainly remember nothing after exiting the cinema hall, though. The movie's shot quite well and is high on technical values, despite not looking like it overshot its budget.

Express Raja works in bits and spurts - go if you are not very particular about being entertained every minute. How wise a move it is releasing this small film along with three other biggies this Sankranti is something that we will reserve comment on.
Share. Save. Connect.
Tweet
EXPRESS RAJA SNAPSHOT 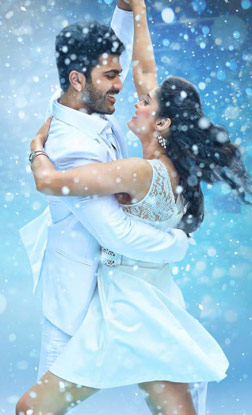 ADVERTISEMENT
This page was tagged for
Express Raja telugu movie
Express Raja reviews
release date
Sharwanand, Surabhi
theatres list
Follow @fullhyderabad
Follow fullhyd.com on
About Hyderabad
The Hyderabad Community
Improve fullhyd.com
More
Our Other Local Guides
Our other sites
© Copyright 1999-2009 LRR Technologies (Hyderabad), Pvt Ltd. All rights reserved. fullhyd, fullhyderabad, Welcome To The Neighbourhood are trademarks of LRR Technologies (Hyderabad) Pvt Ltd. The textual, graphic, audio and audiovisual material in this site is protected by copyright law. You may not copy, distribute, or use this material except as necessary for your personal, non-commercial use. Any trademarks are the properties of their respective owners. More on Hyderabad, India. Jobs in Hyderabad.