What Lies Beneath Review 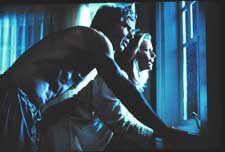 Feroz Hassan / fullhyd.com
EDITOR RATING
7.0
Performances
Script
Music/Soundtrack
Visuals
NA
NA
NA
NA
Suggestions
Can watch again
NA
Good for kids
NA
Good for dates
NA
Wait for OTT
NA
In a Hollywood obsessed with sequels, here is a film that incorporates its own sequel. This has a script that peaks only to drop dead, but rises again like a phoenix to take its rightful place, definitely higher than we thought it would be. The first half of the movie raises a conflict and, for all purposes, resolves it, and then does an about turn to dig deeper into the conflict.

Robert Zemeckis, the director, must have thought that his first installment wouldn't really have the audience clamoring for an encore, so he clubbed the two to salvage some reputations. Yes, there are a few of them under scrutiny here. After all, no one remembers Harrison Ford and Michelle Pfeiffer in the same movie before this one. That makes us wonder, why not? The two are very similar in their approaches, in that they are both very spontaneous, and both carry the unmistakable aura of being stars.

Now, if you ever imagined seeing these two together in a movie, a horror movie would have been the last thing on your mind. A taut drama or a romantic-comedy would have been a more like it. Now, not attributing it to the fact that this is a horror movie, the chemistry between these two characters doesn't work. With characters that seem to unfold in isolation, for the most part, it doesn't quite strike you that one goes with the other. And, I guess, that says it all.

These two play the Spencers, Norman and Claire. Norman is a doctor, and spends a considerable amount of his time on research. With their daughter off to a hostel, Claire finds herself with too much time on her hands, and too few things to tend to. And she's had an accident a year ago, and is yet to put it behind her. With her new neighbours being strangely reclusive, she can't find company. What she finds, though, is a conspiracy theory and a ghost, or that's what she thinks.

You are then subjected to a series of eerie happenings, with the director employing the shock technique to good effect. What you are actually treated to is a succession of surprises, with synchronized loud music to reinforce them. It does give you the creeps, but in no time you'd start anticipating them.

Claire sees a shrink, but she finds a better option in a book on witchcraft. She invokes the ghost, only for her to realize that her husband's had an affair with the girl whose ghost it is. This is quite shocking, for all the wrong reasons. You wonder if you were taken through it all only to end up in just another marital glitch. Well, this passes soon, as Claire plays the forgiving wife.

To be very frank, you aren't still sure if there is a really a ghost around, and there is every chance that the script would have us believe that it was just one of those psychic phenomena that struck Claire. That being the case, it ought to be all over by now. Why are we still talking about the story? That's because there are a few more things to the Norman character than we know. And, they are worth knowing, too, if only for those few more thrills.

In fact, there isn't anything apart from anticipation that keeps you glued to the seat. Not that you'd want more from a horror movie, ordinarily, but from a film directed by the same guy who did Forrest Gump, and with a high profile cast, you'd expect more to the characters than there actually is. Pfeiffer hogs most of the footage, and that leaves a cold Ford who just can't make his presence felt. Pfeiffer, though, does a neat job.

So, the movie may give you the perfect creeps by the dozen, but somehow doesn't give you any thing to savor, well after it is over.
Share. Save. Connect.
Tweet
WHAT LIES BENEATH SNAPSHOT

ADVERTISEMENT
This page was tagged for
What Lies Beneath english movie
What Lies Beneath reviews
release date
Harrison Ford, Michelle Pfeiffer
theatres list
Follow @fullhyderabad
Follow fullhyd.com on
About Hyderabad
The Hyderabad Community
Improve fullhyd.com
More
Our Other Local Guides
Our other sites
© Copyright 1999-2009 LRR Technologies (Hyderabad), Pvt Ltd. All rights reserved. fullhyd, fullhyderabad, Welcome To The Neighbourhood are trademarks of LRR Technologies (Hyderabad) Pvt Ltd. The textual, graphic, audio and audiovisual material in this site is protected by copyright law. You may not copy, distribute, or use this material except as necessary for your personal, non-commercial use. Any trademarks are the properties of their respective owners. More on Hyderabad, India. Jobs in Hyderabad.