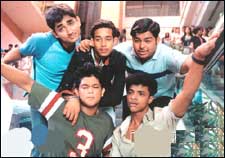 A long time ago, some indulgent mother somewhere watching her little boys beating the crap out of the other neighbourhood kids, smiled and said, "Boys will be boys." Just wish some smart spot boy somewhere had told Shankar that as a movie, Boys will be crap. Of late,

Shankar's films seem to start with great promise and end up wetter than Neha Dhupia in Qayamat.

The imaginatively titled Boys revolves around the lives of Munna and his four friends, whose names matter about as much as the food menu in a strip club. The boys are generally drinking and smoking their way through life when the vivacious Harini (Genelia) waltzes into Munna's life and, inevitably, the lives of his chums. The boys also have a seemingly innocuous interaction with one Mr. Mangalam in a bar. Like buying a leather jacket in May, this happy little bonding session is utterly useless now, but is to prove significant later. 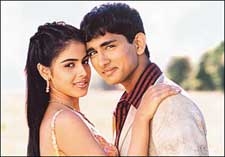 Led to believe that Harini will love him if he proves his commitment by running naked on the road, Munna does it (yes, he does!). Forget the Pacific Ocean - we have found new depths to which filmmakers will go to pull a story. This is the first time I've actually seen censors blacking out moving images. Sheesh!

So our boy with the... well, rounded objects, shall we say, of steel gets thrown in jail for putting the family jewels on public display. The parents of all parties involved say 'no more'. What follows is a really cheap, crass bartering of juvenile pop philosophy about youngsters being exposed to sex through the media all the time so they can't help thinking about it. The situation gets out of hand and Munna and Harini decide to elope.

For some absolutely wacko reason, everyone else wants to elope as well. Inexplicably, from one scene to the next, 10 lovers are drastically reduced to the lead couple and the other 4 boys. Guess if you're not the hero, you are about as desirable as second hand smoke.

Post-interval, we are taken into the magical world of what happens when dumb teenagers do dumb things like Munna and Harini did. Everybody does odd jobs and they manage to scrape together an existence. A brainwave follows, and they make a living from music. Some further twists later they become popstars, and even death and impending divorce do not stop them from sweeping the MTV awards. Yay! And I'm Alice in Wonderland.

I found it a little difficult to believe that such plainly pedestrian music could be A R Rahman's. At times, I felt I was part of a live audience being subjected to the first ever show of 'When music directors attack'. The songs reeked of a wannabe hiphop and rock feel, which made them basically an assault on the senses. And the dancing... either the choreography was really bad or the actors are just begging to have Shiamak Davar on speed dial - on bad dancing emergency call.

Shankar's talent as a director is obvious in the first fifteen minutes itself when he makes excellent use of slow and fast motion cinematographic techniques. But he has a very long way to go to become a good story writer.

All the boys play their parts well, as does Genelia D'Souza. But some scenes make you realize why she's doing cosmetics ads - 'cos she needs them so badly! Some sort of attempt at being different or 'hip' has been made, like calling the interval 'gap'. I remember thinking at the time that maybe the biggest 'gap' was between the ears of some people involved in the making of this film. All in all, strictly timepass - nothing to write, well, anywhere about.
Share. Save. Connect.
Tweet
BOYS SNAPSHOT
See Boys full details
BOYS USER REVIEWS
1 - 10 OF 10 COMMENTS
POSITIVE  |  NEGATIVE |  NEWEST  |  OLDEST  |  MOST HELPFUL  |  LEAST HELPFUL
USER RATING
7.8
308 USERS
Performances
Script
Music/Soundtrack
Visuals
NA
NA
NA
NA
Can watch again - NA
Good for kids - NA
Good for dates - NA
Wait to rent it - NA
Pavan Mugad. on 2nd Feb 2006, 2:39pm | Permalink
Simply the best movie.
RATING
10
Dharan_ajay on 22nd Oct 2003, 4:39pm | Permalink
The movie, as far as the music is concerned, cannot be outplayed. The so-called teenishness in the movie is a bit more than usual, which, in some cases, looks vulgar. Apart from these this is a brilliant movie, which makes you move to its tunes.
RATING
8
Neha Nagpal on 4th Sep 2003, 5:21pm | Permalink
Vulgar movie!!!
RATING
4
Santhya La Vega on 4th Sep 2003, 9:38am | Permalink
As for my point of view, this movie is simply superb!
RATING
10
Cnu Nadimetla on 3rd Sep 2003, 2:23pm | Permalink
The movie is good. We can watch the movie two times for only the songs and the photographic techniques.
RATING
6
Meher Prasanna on 2nd Sep 2003, 1:05pm | Permalink
A movie that you certainly would not want to see with your elders or children until and unless you love being embarrassed. Very crude but realistic. The songs are perhaps the only highlight. The film's ending encourages the youth to love. And no matter what they go through, there is a happy ending. Perhaps, the film needed to convey a deeper meaning by telling the teenagers of this day that life is a hardship and one would have to carefully plan rather than enjoy it in infatuations and repent later. You could surely give this a miss.
RATING
2
Naveen Namboori on 1st Sep 2003, 8:53pm | Permalink
This is the kind of movie which you watch for two and a half hours and forget in a second. But, honestly saying, you'd not get bored. But there's so much of stuff that your head may not like to sink it in. Even a naive guy can point out a hundred errors and still laugh at times at the weird jokes. Yeah, this film is good in parts (very small though) and has borrowed from real life to an extent, but it doesn't live up to its expectations.


The director tried to make a Desi American Pie with a social message! And there are a few scenes (like the jail scene) which look too offbeat for a commercial movie like Boys. (Remember the flashback scenes of the movie 'Jeans'? Sankar should either make a complete art movie or keep totally away from that stuff. He doesn't seem to have the knack of glueing both). Seems to be a misfit ;-). This is an absolute teenagers' movie (not for good) and they'll see it repeatedly not for any inspiration but for the stuff on sexuality. And everyone would agree on one thing: Parents can't watch this movie, with or without their kids :))).

RATING
4
Vivek Disappointed on 1st Sep 2003, 9:40am | Permalink
It's the ebay of filth, only this does not stink. This movie has created so much hype that all the Tamil channels aired these Boys all the time on Independence Day. The music of ARR created quite a sensation, being the first Dolby 5.0 compatible Indian film soundtrack. The songs found place in every car deck. The movie had turned the enthusiasm on the music off. Even if we set this apart, we are compelled to think about the potrayal of youth in this film managed with Rs. 20 crores!


The youth does not think of sex because it's on TV. There is so much comedy on TV, but we don't see people laughing on the streets! This is junk stuff. It's like one of those guys I met who told me that he was very close to his GF because he knew her napkin brand. I appreciated and liked him then, but now there is laughter in my head. How often do you meet guys who actually go and ask a girl questions on her sexuality? Won't the Internet do? How is it that the movie forgot all the amazing stuff that comes in Discovery apart from mating videos of giraffes? Beside, watching giraffes having sex does not turn anyone on. This movie defies conventional logic to the core. The 'BOYS' walk into the movie Dil Chahta Hai when the 'jane kyon..' song is being played - that's like half way through the film! How is it that despite sleeping beside rusted machinery in a junk room with her boyfriend (husband) on top of her for a while and spending days in a jail, Harini manages to keep her hair smooth and silky? There are umpteen number of such errors if you knew the roads and bus numbers of Chennai. This a 20 crore debacle. Shankar has always compromised naration for grandeur, and this movie came on predictable lines - only, this time even the attempt to convey a social message failed.


Try to avoid this movie even if you liked the music, and even if you managed to watch it, try to find scenes that suggest that these guys have musical talent.


Given the average life span of an MTV branded pop star, you end up asking - whatever these BOYS did, is it worth it?!

ADVERTISEMENT
This page was tagged for
boys movie telugu review
boys movie
boy telugu movie review
Boys telugu movie
Boys reviews
Follow @fullhyderabad
Follow fullhyd.com on
About Hyderabad
The Hyderabad Community
Improve fullhyd.com
More
Our Other Local Guides
Our other sites
© Copyright 1999-2009 LRR Technologies (Hyderabad), Pvt Ltd. All rights reserved. fullhyd, fullhyderabad, Welcome To The Neighbourhood are trademarks of LRR Technologies (Hyderabad) Pvt Ltd. The textual, graphic, audio and audiovisual material in this site is protected by copyright law. You may not copy, distribute, or use this material except as necessary for your personal, non-commercial use. Any trademarks are the properties of their respective owners. More on Hyderabad, India. Jobs in Hyderabad.