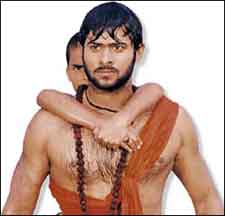 Countless bodies in mutilated state. Blood flowing like the MCH gutter. Bikes and cars bumping off each other like nobody's business on screen. What in the name of God is Raghavendra? Is it a game of Road Rash where people get butchered at the click of the mouse? Is it the disturbing Doom game on the home video? No, it is Prabhas' follow-up of Eshwar, his debut movie.

The film is ridden with so many cliches, you want to stand up and announce what's going to happen next to the audience around. Only there may not be too many left in the theater by the time the movie rolls on.

Raghavendra has about three sections. The first has Raghavendra (Prabhas) shown as a wimp who remains a silent spectator to the violence around him. This time he is on ochre robes, with rudraksh and vibhuti as his accessories. Swamy Agnivesh?

The second is where Raghava is shown as a Van Damme meets Vin Diesel version where he stands up against the wrongs in the society and lands his family in trouble. Terminator?

The third avatar is a cross of the above. In ochre robes, yes, but as a macho man. Vivekananda + physical pyrotechnics?

The transition from the the first to the third is what that two hour nautanki is all about. For the entire first hour, Raghava keeps having these disturbing (for us) images of his past... you know, a collage of black and white kirlian visuals of his flashback. So you know there is something profound about this guy who looks like he lost his pet goldfish that morning.

After about seven repeats of those images, we have the real story. Raghava is the hotblooded youth who bashes up a road romeo because he comments about the vital statistics of a girl walking by the road. These stupid thugs have no other purpose in life but to get even with him on that. In one such this-is-our-chance-to-retaliate, these guys bump off Raghava's girlfriend.

Raghava's parents take an oath from him that he shall never involve himself in any fights, no matter what. They shift from Kurnool to Mantralayam, and he sports the kaashaya vastra in order to stop himself from doing anything violent. But a blast from the past continues, and to protect his folks, he once again has to get back to his original avatar.

Raghavendra's promos may have seemed like it's one helluva movie about a saint who turned into a warrior or vice-versa. Don't be carried away - there is just no dum in the story that would make us emphatise with the transformation that he undergoes. It looks like he was too much into street fights, got bored, took a break, and is back.

The only thing that Raghavendra offers is perhaps the whole genre of fights that Tollywood has seen so far. We have fights in the rain, under the overbridge, in a godown, in a temple foyer, near the traffic junction etc. 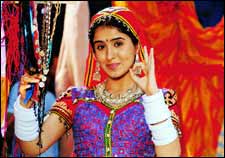 Prabhas hasn't improved a bit in his diction from his first movie, and continues to drawl while he talks. Though he does look impressive in his warrior saint look, it doesn't help the movie much. Anshu has a marginal role and even that is no great shakes. Assuming that she was taken for glamour, she fails to fill in even that slot. Except for about one and half number, even the music doesn't make an impression.

ADVERTISEMENT
This page was tagged for
raghavendra telugu movie review
ragavendra movie story in english
Raghavendra telugu movie
Raghavendra reviews
release date
Follow @fullhyderabad
Follow fullhyd.com on
About Hyderabad
The Hyderabad Community
Improve fullhyd.com
More
Our Other Local Guides
Our other sites
© Copyright 1999-2009 LRR Technologies (Hyderabad), Pvt Ltd. All rights reserved. fullhyd, fullhyderabad, Welcome To The Neighbourhood are trademarks of LRR Technologies (Hyderabad) Pvt Ltd. The textual, graphic, audio and audiovisual material in this site is protected by copyright law. You may not copy, distribute, or use this material except as necessary for your personal, non-commercial use. Any trademarks are the properties of their respective owners. More on Hyderabad, India. Jobs in Hyderabad.