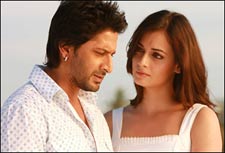 Deepa Garimella / fullhyd.com
EDITOR RATING
3.5
Performances
Script
Music/Soundtrack
Visuals
7.5
3.5
6.0
6.5
Suggestions
Can watch again
No
Good for kids
Yes
Good for dates
Yes
Wait for OTT
Yes
At best, Hum Tum Aur Ghost is a refreshingly diametrically different, and positive, take on the much-abused concept of the dead not having achieved mukti and hence sticking around "haunting" the unfortunate living until a specified unfinished task is done with. The hitch is that its appeal is restricted to those for whom the notion of deliverance of soul is an unconditionally accepted fact. For the rest, this is sadly a nothing movie.

Armaan (Arshad Warsi) is a scatterbrain alcoholic photographer dating his boss Gehna (Dia Mirza), the editor of a magazine. For some time now, he's been hearing strange voices and has also unwittingly had conversations with people who the rest of the world can't see.

One day, Kapoor (Boman Irani) reveals his ghostly self to the disheveled Armaan. Armaan is spooked, but Kapoor tells him there are hundreds of such ghosts that all wish to be set free, and that Armaan is the only one who can help them out. Armaan agrees, and as he goes about his suitably huge acts of kindness and gets completely involved in this little world of his, his girlfriend is convinced he's out of his mind.

Intending to be heart-warming, Hum Tum Aur Ghost has funny lines, and a few pleasant sentiments thrown around. Indeed, a concept like this one has plenty of scope for tears to be jerked, fun to be had, and lessons to be learned. Unfortunately, Hum Tum Aur Ghost doesn't take its core plot too seriously at first. And then, when it does, it's just not enough.

In the first half, it sketches in unwarranted detail the tumultuous relationship between Armaan and Gehna, by planting TV-serial-style situations that make Gehna doubt if Armaan is cheating on her. In fact, this track would have made sense if this were purely a romantic movie - the romance is cute and tender, as the scene in which Armaan and Gehna make up shows.

Later, when Armaan actually sets about solving problems of the dead, there's no meat to the stories there, and things quickly get predictable. Then, though this film keeps hinting that Armaan has a personality disorder, rationalists might be majorly let down by the total lack of "chemical" psychiatric explanation in the story - the ghosts remain, with no explanation thrown in for why Armaan sees what he sees. And the rest of us quickly realize that nothing in the story - neither this world nor the "other" - has been very fascinating.

However, some fine performances make this film watchable. This is mostly an Arshad Warsi product, though the visuals use Boman Irani to draw in the audiences. He's energetic and comically well-timed, as usual. As for Irani, apart from a few lines, there's not much scope for him to perform, while he still manages to keep you looking out for more of him.

Dia Mirza is impeccably turned out and does a pretty good job of acting as well, but Sandhya Mridul is in a wasted role.

A couple of breezy songs and lusciously shot beautiful people are a few of the film's plus points. Unfortunately, that's not enough to keep the audiences coming.

Catch this one only if you're not too keen on either adrenaline or mush.
Share. Save. Connect.
Tweet
HUM TUM AUR GHOST SNAPSHOT

ADVERTISEMENT
This page was tagged for
hum tum aur ghost hindi hd hindi movie
Hum Tum Aur Ghost hindi movie
Hum Tum Aur Ghost reviews
release date
Arshad Warsi, Dia Mirza
Follow @fullhyderabad
Follow fullhyd.com on
About Hyderabad
The Hyderabad Community
Improve fullhyd.com
More
Our Other Local Guides
Our other sites
© Copyright 1999-2009 LRR Technologies (Hyderabad), Pvt Ltd. All rights reserved. fullhyd, fullhyderabad, Welcome To The Neighbourhood are trademarks of LRR Technologies (Hyderabad) Pvt Ltd. The textual, graphic, audio and audiovisual material in this site is protected by copyright law. You may not copy, distribute, or use this material except as necessary for your personal, non-commercial use. Any trademarks are the properties of their respective owners. More on Hyderabad, India. Jobs in Hyderabad.