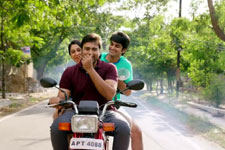 Ravi Kandala / fullhyd.com
EDITOR RATING
6.5
Performances
Script
Music/Soundtrack
Visuals
8.0
6.0
7.0
7.0
Suggestions
Can watch again
No
Good for kids
No
Good for dates
No
Wait for OTT
No
Today's generation is likely to find it difficult to understand Srinivas Avasarala's movies. Not because they have complicated stories or screenplays like Sukumar's films do. On the contrary, they are quite simple. It's the language used in the movies. The man has such command over and respect for the language that the dialogues he writes are almost study material. He also uses subtle variations in words to convey key concepts - when one of the heroes tells his mother "Illu ammeste sukhanga untaamu", she replies "Santoshanga elaago leru, sukhangaa aina undandi". The difference between sukham and santosham might unfortunately be lost on a majority of people.

Also, for a generation that is used to the slapstick variety of comedy where Brahmanandam needs to be beaten up or Raghu Babu needs to dance on pieces of glass for them to laugh, humour stemming from the acts and deeds of the lead characters and the complete lack of a separate comedy track might seem strange. But if you ask us, we would strongly recommend that Srinivas Avasarala does not take a two-year gap for his next movie and make more such delightful features.

Jyo Achyutananda, as was made evident in the trailers, is the story of Jyotsna (Regina), Achyuta Rama Rao (Nara Rohit) and Anand Vardhan Rao (Naga Sourya). Jyotsna moves into the top portion of the house owned by Achyuta's and Anand's father. The three youngsters first become friends and then both the boys decide to propose to Jyo. The proposal, as expected, goes badly and leads to some rather cinematic consequences. What happens next forms the remaining story.

Avasarala's strength lies in his simple stories. He does not have multiple threads or a million characters, and instead chooses to focus on only the main characters. That apart, the conversations he writes are such a relief from the praasa-laden lines that new movies are replete with. Jyo Achyutananda's first half is a total study in screenplay writing. Opening a movie with two heroes who are already married is such a brave gambit, and the humour stemming from each one trying to palm off the blame on to the other keeps the first half going.

The second half gets quite jumpy but Avasarala makes sure that the climax leaves you with a lump in your throat. And when the audience leaves with a smile, the movie's clearly achieved its purpose.

Nara Rohit and Naga Shourya get into the skins of their roles and do very well. They look and behave like middle-class boys and then like middle-class men. They could very well be brothers - that is how natural they are. Regina acts quite well, but changes neither looks nor costumes after the five-year time leap. Sita, Tanikella Bharani and the two girls who play the wives of the heroes do very well.

The music is soothing and a couple of the songs are quite haunting. The film is shot in extremely familiar locales and is visually quite pleasant. The house used for the shooting (it's hard to say if it was a set) is quite nice and reflects a bygone era. The conversation between the hero and a builder where he says that the house can be demolished and a five-storied apartment can be built very subtly holds a mirror to what's happening today.

Jyo Achyutananda has a delightful first half and an uneven second half, but the sum total is much greater than many of the movies that use "mass" as an excuse to dish out tripe. Go watch this one - and keep your ears peeled, since it might be a while before you hear such Telugu again.
Share. Save. Connect.
Tweet
JYO ACHYUTANANDA SNAPSHOT 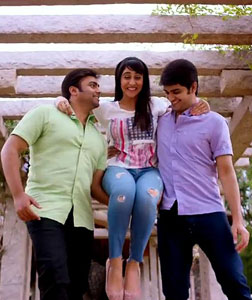 ADVERTISEMENT
This page was tagged for
Jyo Achyutananda telugu movie
Jyo Achyutananda reviews
release date
Naga Shourya, Nara Rohith
theatres list
Follow @fullhyderabad
Follow fullhyd.com on
About Hyderabad
The Hyderabad Community
Improve fullhyd.com
More
Our Other Local Guides
Our other sites
© Copyright 1999-2009 LRR Technologies (Hyderabad), Pvt Ltd. All rights reserved. fullhyd, fullhyderabad, Welcome To The Neighbourhood are trademarks of LRR Technologies (Hyderabad) Pvt Ltd. The textual, graphic, audio and audiovisual material in this site is protected by copyright law. You may not copy, distribute, or use this material except as necessary for your personal, non-commercial use. Any trademarks are the properties of their respective owners. More on Hyderabad, India. Jobs in Hyderabad.