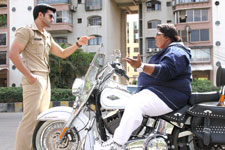 Nupur Barua / fullhyd.com
EDITOR RATING
4.0
Performances
Script
Music/Soundtrack
Visuals
4.0
3.0
4.0
5.0
Suggestions
Can watch again
No
Good for kids
No
Good for dates
No
Wait for OTT
No
Remember the 1988 Hollywood movie Twins that starred Arnold Schwarzenegger and Danny DeVito? It was a fun-filled film that also informed us that twins are not always identical. The duo got into plenty of scraps, made peace with each other and their mother, and they all lived happily ever after. Ajay Chandhok's Hey Bro, promoted with the tagline "Judwaa with a twist", is not a surprise for those who were old enough to watch the aforementioned Hollywood flick, but then again, it is full of surprises - and not in a good way, unfortunately.

Gopi is naïve, and therefore takes it for granted that his twin would be his own carbon copy. Armed with his own photograph, the country bumpkin heads to Mumbai to look for his brother. His troubles begin at the airport itself, and Gopi finds himself having to travel by road. Unfortunately, circumstances land him in prison, and the police officer who arrests him is Shiv (Maninder Singh). What neither Gopi nor Shiv know is that they are the twins.

Gopi meets two goons in the lockup. They work for the dreaded Baba (Hanif Hilal), and Shiv wants to get to the don via these two. The two lackeys, however, use Gopi to escape prison, and that is when the latter's life is thrown into chaos.

In the meantime, Gopi also manages to meet his mother (Indira Krishnan), but he does not know her identity. She tells Shiv, but they both have to keep it a secret from Gopi, whom they take under their wing. Shiv hopes that Gopi can lead him to Baba, but what he does not know is that Baba himself is hunting Gopi down. Shiv is too stressed to concentrate on his personal life, but Gopi slowly worms his way into the hearts and minds of his new family.

Confused? You will be if you try to keep up with the interpersonal relationships, the threats, the reasons for those threats, and the insipid budding romance. To underline the chaos, there are brightly choreographed music videos that do not make sense. The story is simple, in a way, but the various sub-plots and the rather inane complications make this a tedious watch. The whole innocent act is outdated, to say the least, and is not very convincing. Even more outdated are the cardboard/caricature villain and his issues.

The humour, mostly in form of action, and some rather convoluted dialogues, is not effective. In fact, most of it is cringe-worthy, and you get the feeling that the writers are trying too hard to make you laugh. The chemistry between the twins is quite awkward, but it has nothing to do with the premise that they are meeting for the first time. The story is not convincing enough to make you want to root for any of the positive characters, and sadly, you really lose interest in where the script is headed, after a point. Although parallels can be drawn with Twins, Hey Bro has a different story. Or rather, it is an Indianised version of the famous film.

Ganesh Acharya is a fantastic choreographer, and he uses this to his advantage in this movie. He is not, however, an actor. His expressions and his attempt at innocent honesty are depicted in a very OTT manner. Hanif Hilal tries his best to look mean, but he is not a great actor either, although he is, coincidentally, a decent choreographer. Prem Chopra looks lost, and the less said about the other actors the better. Maninder Singh, however, shows some promise, although this is the wrong movie to judge him.

Since the producer and the actor (the same person) is a choreographer, expect many music videos that may or may not be related to the sequence of events in the screenplay. The set design is gaudy, and the costumes are weird, to say the least. The cinematographer goes crazy during the action sequences, but is dull otherwise. The songs are not so great. The editor has done a commendable job keeping this film to under two hours.

Hey Bro is not a fun movie, unlike Twins - it is painful. You wonder what the point of those cameos are. They provide very temporary relief, and as soon as you have to get back to the main story, life gets dull. Avoid it, even if you are a Bollywood action junkie. Watch Twins instead.
Share. Save. Connect.
Tweet
HEY BRO SNAPSHOT 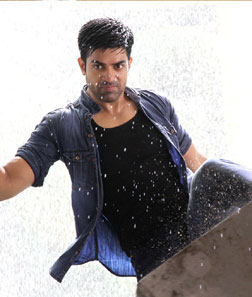 ADVERTISEMENT
This page was tagged for
hey bro hd movies
bhm movies hey bro
Hey Bro hindi movie
Hey Bro reviews
release date
Follow @fullhyderabad
Follow fullhyd.com on
About Hyderabad
The Hyderabad Community
Improve fullhyd.com
More
Our Other Local Guides
Our other sites
© Copyright 1999-2009 LRR Technologies (Hyderabad), Pvt Ltd. All rights reserved. fullhyd, fullhyderabad, Welcome To The Neighbourhood are trademarks of LRR Technologies (Hyderabad) Pvt Ltd. The textual, graphic, audio and audiovisual material in this site is protected by copyright law. You may not copy, distribute, or use this material except as necessary for your personal, non-commercial use. Any trademarks are the properties of their respective owners. More on Hyderabad, India. Jobs in Hyderabad.