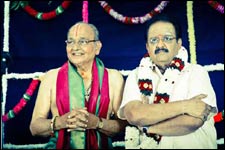 Deepa Garimella / fullhyd.com
EDITOR RATING
4.0
Performances
Script
Music/Soundtrack
Visuals
7.0
4.0
6.0
4.0
Suggestions
Can watch again
No
Good for kids
No
Good for dates
No
Wait for OTT
Yes
It's unnerving to realize that K Viswanath's might be the last comforting image we will have of the bespectacled grandfatherly gentleman in cotton clothing, a pair of leather chappals on his feet, a cloth bag slung over his shoulder, and a walking stick in his hand.

Yessir, the old world - in all senses of the phrase - is fast becoming a thing of the past. And for those who desperately seek anything that refreshes memories of the said old world, Devasthanam might provide some relief.

This film isn't even pretending to be commercially accepted. It deals with a very uncommon subject - something that only a small section of our populace can identify with - and yet, a subject that is very dear to the people it is talking to. Devasthanam is a rare film in that way, especially given which century this is, and given its spiritual agenda in an age of entertainment.

Devastham must particularly be watched by those of our elderly who worry about how death will knock at their doors, and about the dignity of dying. However, the disappointing fact is that despite Viswanath gracing the film with the lead role, Devasthanam is far from being the intellectual, or even aesthetic, work of art that you expect it to be.

Viswanath plays Srimannarayana, a devout elderly person who has no kids, or even family. When he sees a drunken man's corpse on the roadside, disposed off by the municipal truck in a way that only animals are, he is disturbed.

He takes the liberty of asking a stranger, Sambamurthy (S P Balasubrahmaniam), who he somehow identifies as the "right person", to conduct his last rites when he dies. Sambamurthy is shocked at the unusual request, and avoids Srimannarayana for a while. Devasthanam is essentially a story of the bond that these two men come to share.

This is a simple film, and that is its undoing. Given the aim of the story, there are no awe-inspiring dialogues, and no thought-provoking bits of gyan to marvel at.

It is also not clear what the message of Devasthanam is. At one point in the film, there is some commentary on the fact that death and religious rites should not be a thing to worry about, and that it is more important to live life meaningfully. Sometimes, there is some well-intentioned preaching about values. Somewhere towards the end, the film suggests that the Harikatha culture must be revived, with Harikathas written keeping the present world in mind. In all, what Devasthanam wants to say is not spelled out, and you have to weed the message out with your own intellect and spiritual conditioning.

While K Viswanath is the picture of respectability, SP chooses to do his own thing. His usual penchant for hamming it up spoils the show. What his extra-effervescent on-screen persona does is make Sambamurthy unnecessarily hyperactive, blabbering and fidgety, and this doesn't suit the role. And what was that "comedy" sequence with Kovai Sarala about?

Besides, the romance with Aamani is downright embarrassing - it's not easy on the soul to watch him kiss Aamani's waist, for example. Meanwhile, it's nice to see Aamani back on screen, although with a voice we are not used to at all.

The sad visuals and the dull colours aside, Devasthanam is also poorly-edited. The film feels, and plays out, like a TV serial. The music is classical, most of it rendered by SP himself. But save for a couple of beautiful classical songs re-adapted, this is no Ilayaraja at work.

In one scene, a rich lawyer tells Srimannarayana that he's unhappy despite his vast wealth, and asks him for advice on peace of mind. The lawyer explains that he rose to riches from poverty through his hard work, but that he regrets defending criminals who actually deserved to be punished. Srimannarayana then tells him to go the victims of each such case and pay them what he got paid to defend the case.

Now, that is the kind of story that would have made for a great movie, with plenty of potential for feel-good situations and messages. Till one of our filmmakers realizes that potential, however, we can only take solace in the fact that someone did attempt something like Devasthanam.
Share. Save. Connect.
Tweet
DEVASTHANAM SNAPSHOT 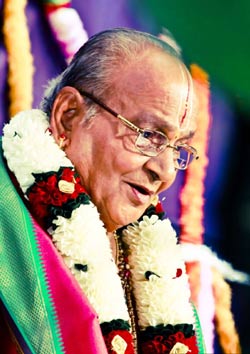 ADVERTISEMENT
This page was tagged for
devasthanam telugu movie review
Devasthanam telugu movie
Devasthanam reviews
release date
K Viswanath, S P Balasubrahmaniam
Follow @fullhyderabad
Follow fullhyd.com on
About Hyderabad
The Hyderabad Community
Improve fullhyd.com
More
Our Other Local Guides
Our other sites
© Copyright 1999-2009 LRR Technologies (Hyderabad), Pvt Ltd. All rights reserved. fullhyd, fullhyderabad, Welcome To The Neighbourhood are trademarks of LRR Technologies (Hyderabad) Pvt Ltd. The textual, graphic, audio and audiovisual material in this site is protected by copyright law. You may not copy, distribute, or use this material except as necessary for your personal, non-commercial use. Any trademarks are the properties of their respective owners. More on Hyderabad, India. Jobs in Hyderabad.