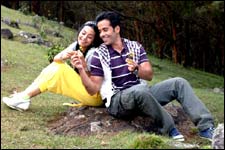 Nupur Barua / fullhyd.com
EDITOR RATING
3.0
Performances
Script
Music/Soundtrack
Visuals
4.0
4.0
3.0
3.0
Suggestions
Can watch again
No
Good for kids
No
Good for dates
No
Wait for OTT
No
There are really just two types of audiences now - the pro-Barjatyas and the anti-Barjatyas. In short, you will either watch a Rajshri Productions movie, or you will not. If there is one thing you cannot accuse Rajshri Productions of, it is inconsistency. You know just what to expect in a Barjatya flick.

Sahil Rastogi (Tusshar Kapoor) is a cartoonist, who lives alone in a small flat that his now-deceased parents left him. Ritu Diwan (Amrita Rao) is the daughter of an automobile parts tycoon, played by Ram Kapoor.

Sahil and Ritu sigh, smile and occasionally lift their downcast eyes to look at each other before they realise, in the middle of a song, that they are in love. Diwan does not want his daughter to repeat the mistake that his sister (Madhoo Kapoor) made by marrying a 'creative' man. So he raves and rants about how an artist will sell his soul, how creativity is not practical, and other such inferences, until his sister convinces him to consider Ritu's feelings.

Diwan then offers the young cartoonist a job as the MD (yes, MD, while his daughter, who is enrolled in an MBA institute, is still an intern) of the company for 3 months to prove his worth. He also assures Sahil that as long as he remembers the 'Profit And Loss' chapter from school, he will manage (important lesson learned here - stop chasing MBA and other fancy degrees).

Will Sahil manage to win over the hard-as-nails Diwan? Can the relationship between Sahil and Ritu withstand the test of time (a whole 3 months!)? Will Ritu's aunt stop hamming and gesticulating in moments of both stress and happiness? Can Ritu's maternal grandfather (Prem Chopra) hold himself back from lecturing on Indian culture? Were the jealous colleagues justified in appointing a slutty secretary for Sahil? Does Ritu's childhood friend know why he is suddenly in love with her? These and other such mindboggling questions will be answered, if you can manage to sit through to the end of this extremely long movie.

The music is anything but catchy. In fact, it is not even from this era. As far as S Manavsi, who wrote the story, is concerned, all you need is love. Add to this belief a strong overdose of saccharine-sweet, squeaky clean characters, a few envious but harmless adversaries, and some unachievable goals that will eventually be attained, and you have a Rajshri movie.

Each actor heaves a sigh before delivering a dialogue, inserts 'Erm', 'Er' and 'Uh' into every sentence, and ends the speech with another sigh, accompanied by slight body movement (like turning away in disappointment).

Tusshar alternates between awkward grins and baffled looks, Amrita relives her Vivah days, with an extra dollop of sweetness and forced laughter, Madhoo seems ill at ease and has a bad sense of timing, and Jai Kalra as the ambitious GM is an unthreatening cardboard villain. Ram Kapoor tries - watch out for his subtlety when he first meets Sahil - but there is not much he can do in a setting such as this. And Prem Chopra as the benign grandfather is almost believable, relatively.

If you want to revisit the 1990s, when women in movies sacrificed their lives to ascertain their better half's future, when the people on screen wore horrendous clothes, when the Barjatyas portrayed an alternate world that did not exist (even then), and when television had not yet mastered the art of saas-bahu (read regressive) shows, then this movie is for you. Just be prepared to sit forever for the end, however predictable it is. Otherwise, give it a miss, and rent a DVD of the more believable-for-its-time Maine Pyaar Kiya.
Share. Save. Connect.
Tweet
LOVE YOU MR. KALAKAAR SNAPSHOT

ADVERTISEMENT
This page was tagged for
Love You Mr. Kalakaar hindi movie
Love You Mr. Kalakaar reviews
release date
Tusshar Kapoor, Amrita Rao
theatres list
Follow @fullhyderabad
Follow fullhyd.com on
About Hyderabad
The Hyderabad Community
Improve fullhyd.com
More
Our Other Local Guides
Our other sites
© Copyright 1999-2009 LRR Technologies (Hyderabad), Pvt Ltd. All rights reserved. fullhyd, fullhyderabad, Welcome To The Neighbourhood are trademarks of LRR Technologies (Hyderabad) Pvt Ltd. The textual, graphic, audio and audiovisual material in this site is protected by copyright law. You may not copy, distribute, or use this material except as necessary for your personal, non-commercial use. Any trademarks are the properties of their respective owners. More on Hyderabad, India. Jobs in Hyderabad.