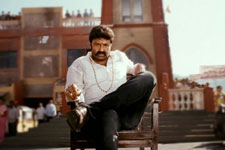 Ravi Kandala / fullhyd.com
EDITOR RATING
5.0
Performances
Script
Music/Soundtrack
Visuals
5.0
5.0
5.0
5.0
Suggestions
Can watch again
No
Good for kids
No
Good for dates
No
Wait for OTT
No
When you are in a theatre full of people who start screaming "Jai Balayya, Jai Jai Balayya" when the interval bang happens, it is difficult to be objective. This is what happened to us when we were watching Legend today. The movie, which has an absolutely banal first half, moved into top gear right before interval, and when the interval card came on screen, people started screaming as one. And this was not even in a single screen, this was in Prasads Imax, on the big screen!

Nandamuri Balakrishna's Legend comes in with an incredible amount of hype. The successful teaming of Boyapati Srinu and Balakrishna was coming together again, and the promos, stills and songs were all decent, adding to the expectations. And the director's method to deal with these expectations seems to have been to magnify everything from Simha, his first hit with Balayya.

If Balayya killed 100 people in Simha, he kills a thousand (or two thousand) here. If he uttered one punchline per scene in Simha, he utters two or even three punchlines a scene in Legend. If others glorified Balayya to the proportions of a demi-god in Simha, they actually deify him and call him God in Legend. If fans liked Simha, they are likely to love Legend. And if you hated Simha, you are likely to despise Legend.

The plot of the film is the same as Simha. Krishna (Balakrishna) works and lives in Dubai. He has a huge loving family back home in India, the matriarch of which does not want him to ever come to India. Krishna is in love with Sneha (Sonal Chauhan), and decides to surprise his family by taking Sneha directly back home.

He goes back home, and right upon arrival, enters into an altercation with some goons, one of whom is Jitender's (Jagapathi Babu) son. Jitender swears revenge and nearly eliminates Krishna, at which point in time, Jayadev (Balakrishna again) enters the scene and saves Krishna and his family. The rest of the film shows how Jayadev resolves his conflicts with Jitender and his own family.

Simha had the same plot with the two Balayyas playing father and son - here, it is two brothers. Apart from that minor twist, the movie proceeds on completely expected lines. The first half has some mismatched romance between Balakrishna and Sonal Chauhan. Sonal goes the full hog and gives us a full bikini scene to ogle at. The second half runs in flashback mode. What is surprising, however, is the fact that in the entire second half, there is no mention of Krishna or Sneha at all. Those characters disappear entirely from the movie, and are not even shown in the background.

There is nothing that the director has done innovatively here; he was motivated completely by his desire for box-office success. The producers have spent lavishly enough, and the result shows. Devi Sri Prasad churns out a decent score, and the songs have also been shot well. The film's climax also seems like a launchpad for Balakrishna's entry into politics.

Balakrishna shoulders the movie, is present in nearly every frame, and does a great job as usual. But despite the care taken in makeup, his age shows, and the awkwardness in dealing with the much younger heroines comes across strongly. Radhika Apte has a half decent role, while Sonal Chauhan has nothing but the mandatory two-songs-three-scenes appearance.

Jagapathi Babu, in his maiden appearance in a negative role, has nothing much to do except scream his lungs out in every scene he appears. The others - and there are several of them - are only there to fill the screen.

Legend is a re-dux of Simha, and not a very well done one at that. Go if you have to, but be mindful of the "A" certificate and do not take your kids - there is violence of the repulsive kind present through the movie, and that is definitely not what your kid should be seeing.
Share. Save. Connect.
Tweet
LEGEND SNAPSHOT 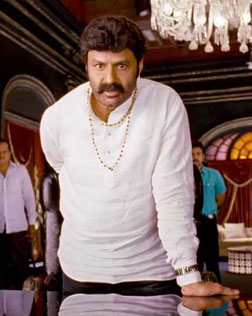 ADVERTISEMENT
This page was tagged for
legendtelugunews
Legend telugu movie
Legend reviews
release date
Nandamuri Balakrishna, Radhika Apte
Follow @fullhyderabad
Follow fullhyd.com on
About Hyderabad
The Hyderabad Community
Improve fullhyd.com
More
Our Other Local Guides
Our other sites
© Copyright 1999-2009 LRR Technologies (Hyderabad), Pvt Ltd. All rights reserved. fullhyd, fullhyderabad, Welcome To The Neighbourhood are trademarks of LRR Technologies (Hyderabad) Pvt Ltd. The textual, graphic, audio and audiovisual material in this site is protected by copyright law. You may not copy, distribute, or use this material except as necessary for your personal, non-commercial use. Any trademarks are the properties of their respective owners. More on Hyderabad, India. Jobs in Hyderabad.