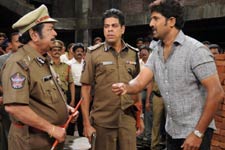 Ravi Kandala / fullhyd.com
EDITOR RATING
1.0
Performances
Script
Music/Soundtrack
Visuals
1.0
1.0
1.0
1.0
Suggestions
Can watch again
No
Good for kids
No
Good for dates
No
Wait for OTT
No
Remember that slab of dark chocolate that you bought aeons ago? You forgot all about it and left it in the freezer for a very long time. Then the fridge conked out, and you fished out stuff from the freezer, and found this lying in a corner. You know that the product is beyond its expiry date, that it is probably gone all mouldy by now, and that the best course of action for you is to throw it away. The heart will, however, force you to take one last look at it. And that look kills it all for you, probably putting you off chocolate for quite a bit of time.

A movie lying in the cans for a long time is similar. The film was made following the trend at a particular time. The stars were also in their prime at that time, the music director was at the heights of his prowess, and the audience's sensibilities were tuned in a certain way. If the film had seen the light of the day at the time it was made, it would have probably made a half-decent amount of money and kept everyone happy.

However, by the time it releases after hiding in the cans forever, the trend has changed, the stars have had their lustre scraped off, and the audience's sensibilities have been refined, making the product obsolete and a half, and causing everyone in the equation more embarrassment than if the film had remained in the cans.

Ramachari belongs to that category. Human stilt Venu Thottempudi had enjoyed a modicum of popularity once, and had kept a few producers happy by making small-budget comic films that were always minimum guarantee. His luck ran out sometime ago, though, and the industry moved on. Ramachari, a movie that was made during Venu's heyday, had made it to the theatres finally, thanks largely to the dull summer Tollywood seems to be having.

The film is about Ramachari (Venu), a young man who wants to join the police force. He prepares for this by eating 25 eggs every meal and drinking a jug of milk each morning. His dad Kotachari (Chandramohan) and uncle Tatachari (LB Sriram) are both in the police department. The two of them are in the dog squad and bomb detection squad and in the regular police beat all at once (don't ask).

Ramachari once saves the CM's life accidentally, and then makes a habit of it, proving to be a thorn in the flesh of a corrupt police commissioner (Murali Sharma), who is out to help a behind-the-bars terrorist kill the CM. The film is about how Ramachari saves the CM and achieves his objective of joining the police force.

The movie has the mandatory romantic track featuring Kamalinee Mukherjee, who looks absolutely listless and is plastic beyond belief. Venu has around 10 different looks in the film - not disguises, but different looks caused by the actor's changing looks over the long period of time it took to make this film. He acts as well as he can, which is not well enough.

Ramachari has a huge supporting cast, including Brahmanandam, Chandramohan, L B Sriram, Giri Babu, Balaiah, Ali and Raghu Babu, amongst others. All the actors are severely restricted by their badly-written parts.

The film's production values are extremely low. Its titles credit the music of the film to Manisarma, but the tunes sound more like they've been scored by a distant cousin of Manisarma's driver. The remaining attributes are better left alone.

For Telugu cinema fans and followers, Ramachari also commits the ultimate travesty of invoking the Pink Panther of Tollywood, Chantabbai. Ramachari features Sutti Velu in a cameo, playing the same role that he played in Chantabbai, It is sad that he would agree to do this - a sad reflection of the industry and its fickle times, where fame is here a moment and gone the next.
Share. Save. Connect.
Tweet
RAMACHARI - EEDO PEDDA... SNAPSHOT
RAMACHARI - EEDO PEDDA GOODACHARI SNAPSHOT 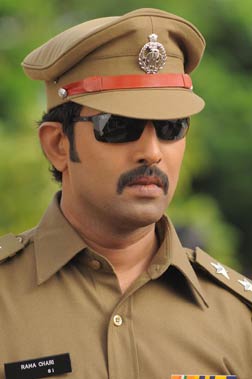