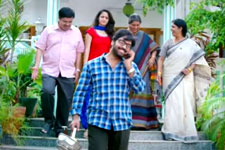 Daphne Rose / fullhyd.com
EDITOR RATING
6.0
Performances
Script
Music/Soundtrack
Visuals
6.0
6.5
6.0
6.0
Suggestions
Can watch again
No
Good for kids
Yes
Good for dates
Yes
Wait to rent it
No
There are ways for a film to make a statement without pontificating, and that's where most of E Ee's USP lies. Director Ram Ganpati Rao's movie is a breezy romcom about two barmy individuals meeting and falling in love that would also like to teach you a thing or two - or more - about hygiene, and respecting both genders for the roles they play, while you're at it.

The story features Siddhu (Neiraj Sham), an unassuming yet wholly confident sorta middle class millennial who loves his mother's dosas but hates women with a passion that surpasses all else - so much that he only prays to bachelor gods. Crossing paths with him is Hasini (Naira Shah), the millionaire daughter of Siddhu's millionaire boss, new CEO of the company, and chief thorn in our hero's flesh. When Siddhu and Hasini first meet, egos clash and battle lines are drawn. How these two individuals whose attitudes to life are so fundamentally divergent come together, with some help from a benevolent aghori, forms the crux of the story.

Strictly speaking, E Ee is not a terribly original tale. Taking inspiration from Mel Gibson's "What Women Want" pre-interval, and another Hollywood romcom "It's A Boy Girl Thing" post it, it's a story of what happens when you can suddenly "hear" the thoughts of a race you completely despise, and how shit you thought couldn't get worse, does when you end up swapping bodies - with a female no less!

But like we mentioned earlier, it's the treatment, if not the story, that matters here. Several scenes manage a few chortles without having to resort to cringeworthy humour, the music is pleasant, and the characters are etched out sufficiently enough to make you feel invested in them. The movie is made on a modest budget, and director Ram shows that it is possible to make a halfway decent film without having to resort to exotic foreign locales, ripped male leads and illustrious family names at the drop of a hat.

So far, so good. What stops E Ee from being a memorable movie, however, is its editing. In trying to successfully establish the lead characters, their conflict and its eventual resolution, the narrative gets choppy occasionally. Other collateral damages in this context are the conflict resolutions in the sub-plot that are dealt with in a very perfunctory fashion.

The performances, too, barring those of the lead actor and his cohorts, could certainly have done with some finesse. While this is a Neiraj Sham film all the way, with the young actor showing occasional flashes of star Venkatesh in the way he looks and his mannerisms, special mention must be made of his two friends who lend their talents to the comic track in the film. They drive home the point of cleanliness and self-hygiene in much better fashion than a lot of PSAs seen in recent times. But the prime female actors in this film, who can pretty much be referred to as "legs" - I mean seriously, what was with all those low angle shots for their introductions? - could certainly do with some polish.

All said and done, E Ee is a fairly decent movie that keeps you engaged. It's a wholesome family entertainer that you can take your parents or kids to, too, without wanting to melt into the backrest of your chair - barring maybe one or two scenes that make you want to roll your eyes more than anything else. Will you remember it in a month, a week, a day or even a half? Probably not. But mostly, you will enjoy it while it lasts.
Share. Save. Connect.
Tweet
E EE SNAPSHOT 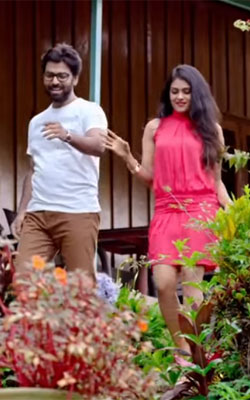 ADVERTISEMENT
This page was tagged for
e ee telugu movie review
e ee telugu movie rating revew
E EE
Telugu old movies dounload
E e Telugu movie dounload
Follow @fullhyderabad
Follow fullhyd.com on
About Hyderabad
The Hyderabad Community
Improve fullhyd.com
More
Our Other Local Guides
Our other sites
© Copyright 1999-2009 LRR Technologies (Hyderabad), Pvt Ltd. All rights reserved. fullhyd, fullhyderabad, Welcome To The Neighbourhood are trademarks of LRR Technologies (Hyderabad) Pvt Ltd. The textual, graphic, audio and audiovisual material in this site is protected by copyright law. You may not copy, distribute, or use this material except as necessary for your personal, non-commercial use. Any trademarks are the properties of their respective owners. More on Hyderabad, India. Jobs in Hyderabad.