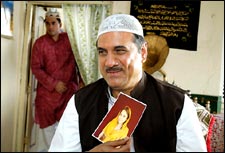 Deepa Garimella / fullhyd.com
EDITOR RATING
3.5
Performances
Script
Music/Soundtrack
Visuals
7.5
4.0
5.0
4.0
Suggestions
Can watch again
No
Good for kids
No
Good for dates
Yes
Wait for OTT
Yes
Well Done Abba has a brilliant piece of political satire as its central concept, but reminds you that execution is the wicked middleman who actually has the power to let the world know you have some ingenious work going up there. Shyam Benegal's latest film goes about telling its joke so laboriously its sheen is lost by the time its punchline is delivered, and this is quite an unfortunate turn of events for this flick.

Also, it is hard to imagine this film being thronged by audiences outside of the city, given its excessive Hyderabadi intent and flavour. Even sadder is the fact that given how wrong it goes in executing that very flavour, it is harder indeed to see our own audiences embracing it.

The story is narrated by Armaan Ali (Boman Irani), a driver in Mumbai, who explains to his boss why his leave of absence from work stretched to over 3 months. Armaan Ali hails from a village (that the film calls Chikatpally) near Hyderabad, and he'd gone home to get his daughter Muskaan (Minissha Lamba) married.

So when the story begins, marriage plans are being put off, thanks to a twist involving his vagabond twin brother (played by Boman Irani again). Now Armaan wants a well dug on his field. His trips around government offices, right from the village sarpanch, have him haplessly doling out bribes, and getting fake documents signed. There is no well at the end of all the drudgery, however, and Armaan and his daughter set about giving the system a taste of its own medicine.

Well Done Abba primarily hits out at a political class that rides on hypocritical pro-poor policies, not shying away from taking names of actual government schemes. Its other grouse is the harsh reality of how poverty is incentivised - Armaan has to produce a fake Below Povery Line (BPL) certificate to avail himself of the government's benefits. The proceedings essentially have an Office Office kind of comic feel, but with some friendly community banter thrown in.

It is, however, much less comic. And oh, much much slower. Both cleverness and humour are run over by a crawling script that just won't pick up pace. The funnies mostly revolve round the technicalities of the paperwork, and aren't too easy to get. Also, Armaan's actual modus operandi of getting back at the system is pretty unexciting.

The film has nativity issues as well. Firstly, except for a few lesser-known actors on the side (who are possibly local talent), the cast has not been able to pull off the Hyderabadi lingo. In fact, sometimes, actors end up delivering a strange strained mix of filmi Goan and comedy-TV-serialish Gujarati.

The dressing isn't quite right, either - the Telugu women are dressed in Marathi-ish sarees, and our MLAs in the Assembly are dressed like they do in Tamil Nadu. This movie, then, results in being a generalized Hindified "semi-south-Indian, semi-Hyderabadi" story. And sadly, it won't really matter to audiences of the north who see everything south of Bombay as a Madrasi blur.

Boman Irani is quite the pleasure to watch on screen that he always is, but this is, somehow, a rather dull role for him to be in. Minissha Lamba's dialogue delivery is pretty bad, especially given that she's botched up her Hyderabadi lines. Then, there's Sameer Dattani who doesn't even try to sound the part.

Plenty of talent abounds in the flick, however, including Rajit Kapoor, Yashpal Sharma and Ila Arun (who does get her accent right, better than the rest of the lead actors do), and everyone is quite good to watch. However, it's unfathomable how Ravi Kissen's role was crept into this - his presence single-handedly brings a bucketful of sleaze into the proceedings, with his advances on his newly-wed wife (Sonali Kulkarni) seeming totally out of place in this otherwise wholesome movie.

Light pleasant music accompanies the plot, and there's a bizarre but interesting nikaah song towards the end. And call us discerning, but the visuals aren't too impressive -you can feel the lack of true Hyderabadi flavour although there's been effort in making them authentic.

Well Done Abba could have been charming, but isn't, and sadly, no amount of foreign kaaykus can change that fact.
Share. Save. Connect.
Tweet
WELL DONE ABBA SNAPSHOT

Can you also include the cast and crew details followed by reveiw.

ADVERTISEMENT
This page was tagged for
the well done abba movie in hindi mp4
Well Done Abba hindi movie
Well Done Abba reviews
release date
Boman Irani, Minissha Lamba
Follow @fullhyderabad
Follow fullhyd.com on
About Hyderabad
The Hyderabad Community
Improve fullhyd.com
More
Our Other Local Guides
Our other sites
© Copyright 1999-2009 LRR Technologies (Hyderabad), Pvt Ltd. All rights reserved. fullhyd, fullhyderabad, Welcome To The Neighbourhood are trademarks of LRR Technologies (Hyderabad) Pvt Ltd. The textual, graphic, audio and audiovisual material in this site is protected by copyright law. You may not copy, distribute, or use this material except as necessary for your personal, non-commercial use. Any trademarks are the properties of their respective owners. More on Hyderabad, India. Jobs in Hyderabad.