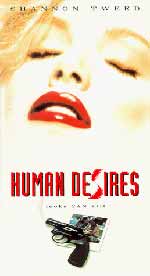 1. When your girlfriend/wife starts her "nagging rap".
2. When you begin to shop for Viagra more than you do for condoms.
3. When you go to see such sickening porn-flicks as Night Of Shame - Indecent Behaviour IV.

Let's be honest - you wouldn't go to this one for cinematic values. It's a very specific interest. Only, it's the wrong kind of film for that - sort of like going with expectation of a roller coaster ride in Disneyland and getting a "tonga" ride in Chandni Chowk. Only, worse.

The movie (actually Human Desires, and has nothing to do with any night of shame or indecent behaviour - isn't there a law against this?) opens with a party at a mansion of a Mr. Miles, who owns some modeling agency. There are stupid looking people wearing stupider looking clothes and dumbest of smiles, roaming all around. As for the girls, if this agency is for real, the fashion industry is dead.

Anyway, a drunk guy in the party, who is a friend of a lesser drunk guy who is something in the agency, gets attracted to a pretty looking model (to his eyes only). Whooof! The girl's not interested (that's why they say female of the species is more intelligent). So what does our guy do? Well, he asks his friend to introduce him to another pretty face - so much for tenacity. The second girl is evidently not as intelligent as the first one - she falls for our drunk protagonist - and they decide to take a walk along the poolside. Just as your expectations start rising, the censors step in.

The story now takes a U-turn. The supposedly best model of the agency is floating dead in the pool, with slit wrists. Now you are enlightened - this is not a porn-flick, it's actually a crime thriller. Our dumb looking drunk protagonist is Bond, James Bond, and he is in such a state because he was earlier a cop who left the job because his lady love got killed and he could never find the assassin and he was heart broken and all that...

The rest of the movie tries to be, like we said, a thriller, with the first girl hiring our Bond to investigate because the deceased was her friend and she is not convinced with the suicide theory. Our man's modus operandi makes you want to turn private investigator yourself - he spends most of his time drinking and bedding women. There are some lovemaking scenes, but mostly in the CBFC office. And if that's what you've gone for, you can leave after interval.

In the end here's what the sadist poet in me has to say (if I've taken so much torture for you, I can torture you a little, can't I?):

I went to see the night of shame,
And my head's still all aflame,
The sheer thought makes me all weepy,
Why the hell did I have to watch something this creepy?
Share. Save. Connect.
Tweet
HUMAN DESIRES / NIGHT... SNAPSHOT
HUMAN DESIRES / NIGHT OF SHAME (INDECENT BEHAVIOUR IV) SNAPSHOT

ADVERTISEMENT
This page was tagged for
Human Desires / Night Of Shame (Indecent Behaviour IV) english movie
Human Desires / Night Of Shame (Indecent Behaviour IV) reviews
release date
Shannon Tweed, Christian Noble
theatres list
Follow @fullhyderabad
Follow fullhyd.com on
About Hyderabad
The Hyderabad Community
Improve fullhyd.com
More
Our Other Local Guides
Our other sites
© Copyright 1999-2009 LRR Technologies (Hyderabad), Pvt Ltd. All rights reserved. fullhyd, fullhyderabad, Welcome To The Neighbourhood are trademarks of LRR Technologies (Hyderabad) Pvt Ltd. The textual, graphic, audio and audiovisual material in this site is protected by copyright law. You may not copy, distribute, or use this material except as necessary for your personal, non-commercial use. Any trademarks are the properties of their respective owners. More on Hyderabad, India. Jobs in Hyderabad.