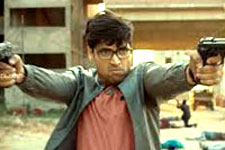 T J Reddy / fullhyd.com
EDITOR RATING
6.0
Performances
Script
Music/Soundtrack
Visuals
5.0
5.0
6.0
6.0
Suggestions
Can watch again
Yes
Good for kids
No
Good for dates
No
Wait to rent it
No
While promoting Vishwaroopam 2, Kamal Hassan said that the directors of his youth (K Balachander, K Vishwanath, Singeetam Srinivas Rao etc) had never attempted to make an out and out espionage/action film simply because they felt that they didn't understand the nuances of the medium well enough. Indian cinema did not have a history with genre films at the time, and the possibility of making a bad movie scared those maverick storytellers more than the loss of money it might entail.

Time has shown us that this fear was not baseless, as for every Gudachari 116 we have had a Jawaan, for every Baby we've gotten a Tiger Zinda Hai, and for every Agent 999 film we've been cursed with a Bang Bang.

Adivi Sesh, however, seems to have put his stock in learning from both the mistakes of his local predecessors and the successes of films the world over. An average Indian filmgoer wants songs, fights, romance and patriotism in his/her films whereas a more "discerning" cinema lover looks for complex characters, technique, themes and ambition. A story about a son trying to emulate his legendary father's success as a spy while being questioned about his actual motivations for doing so by his lady love and also being hunted down for a rogue agent might just be a story that pleases audiences on both sides of the aisle.

Goodachari borrows its title, and its lead character's name and his code number from a 1966 Telugu film of the same name. It borrows its entire training sequence from a certain Hollywood spy satire directed by Matthew Vaughn. And it sprinkles in some melodrama and jingoism from other films it passed on the street while covertly carrying out its mission. But all these aspects contribute to the movie's biggest triumph, which is its mastery of misdirection.

The film presents an infallible portrait of its hero, but cuts him down to size (as much as a Telugu film will allow itself to do). The film wants you to think that Vennela Kishore was cast to speak English in his trademark "funny" way, but soon subverts your expectations by illustrating his competency as an Intelligence Agent. The film lacks subtlety, nuance, good acting and strong production values at its commencement, but like its lead character who is run through the gamut of spy training, the film's cast and crew too seem to have undergone rigorous training in the art of filmmaking through the course of making their movie. The character design gets richer, the conflicts get murkier, and the production itself gets an upgrade by the time the closing credits roll.

Goodachari takes a cue from Prasthanam and leaves the audience with the lasting memory of a well-told story by exorcizing the demons of masala cinema in the first half. While it borrows Ravi Prakash to incite its narrative, the narrative itself isn't as compelling as it needs to be. This can be partly attributed to Adivi Sesh's lack of finesse as a leading man. He is tall and dark and almost resembles a debonair spy when looked at through some rose-tinted glasses, but he is not a commanding enough presence on-screen. His relationship with the gorgeous Shobita Dhulipala's Sameera is forced at best, and undermines his organization's effectiveness at worst.

Not every one of the movie's many conflicts is carried by actors of Prakash Raj's calibre, and that becomes wholly palpable as green actors mumble through strong lines with either inhumanly stoic or overtly cheerful expressions on their face. Then again, the film picks its final battle wisely, and for that, we give a half tip of our hats.

The other half is reserved for when Goodachari stages its final battle in a more convincing manner. What begins with a truly whistle-worthy twist, followed by an excellently choreographed one-take fight scene, ends with the villain escaping the clutches of the Indian Army even though he is fully surrounded. Moments like this one take away from the movie's overall presentation as it stages its scenes to reach moments on the page rather than pay attention to continuity and logic. This sequence is just one in many, and if it weren't for a slick story and an oft pulse-pounding score, we would be paying more attention to sore thumbs rather than putting medical attention aside for the time being.

Goodachari doesn't have a plethora of Indian spy movies to draw from to be a convincing satire, it doesn't have the big budget to be a blockbuster hopping from country to country, it doesn't have a Wally Pfister or a Roger Deakins behind the camera to fill its frames with symbolic imagery while making it look like a million bucks, and it doesn't have a Ken Adam to give it an iconic set design (or a set design in general). What it does have, however, is its adherence to the basics of storytelling. 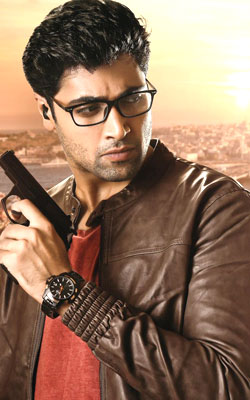 I wanted to share my thoughts regarding one aspect of the movie here, please share your views.

Spoilers ahead.
Jagapathi Babu was not shown even though he was there in two incidents in first half of the movie. First one: In the initial sequence of the movie, it is shown that only Prakash raj and Ravi Prakash are only there at the shooting spot. Second one: When the hero cries while looking at the father's picture only Ravi and Prakash Raj were shown with Jagapathi babu blurred off. I felt that the director cheated me by not showing details as he could not get a different approach to convince / trick the audience to believe Ravi could be father and not Jagapathi babu.
RATING
6
Anvesh on 9th Aug 2018, 6:14am | Permalink
TJ,

Throughout the film, one question haunted me. When the hero is on the run, why on earth does he not change his appearance? Go bald or grow a moustache? Even the length of his stubble does not change a millimeters. Its eating me for the inside.
TJ Reddy on 9th Aug 2018, 10:28am | Permalink
That is one of the most annoying parts of any spy movie, to be honest. Even in The Bourne Identity, Matt Damon gets his girlfriend to cut her hair and change her look but he stays the same. Same in the Bond movies and much worse in Mission Impossible where they have those insanely awesome scooby doo masks everywhere.

It's just suspension of disbelief I guess. You gotta roll with it. if not, the whole house of cards implodes.
Raghu M on 6th Aug 2018, 10:17pm | Permalink
"..shooting for the stars and landing on the moon.. is better than face-planting on the earth.." - Precisely and very well summarized.
As with the other movie I liked "Chi La Sow", wasn't sure in the first half hour if I was liking the movie or not, but as the time progressed, I got immersed into them and at the end I walked out with the feeling that "after a long long time, I watched two good Telugu movies, back-to-back".
TJ Reddy on 9th Aug 2018, 10:31am | Permalink
I have always maintained that there are good stories being told in every film industry. Because marketing machines only promote the biggest of releases and their goals of breaking "records" are so overwhelming, the diamonds in the rough are lost to time until they swell up a cult following.

That is why I believe, people will remember Mental Madilo, Pellichoopulu and Malli Rava much more than they will remember Jai Lava Kusa, Spyder and Khaidi 150.

ADVERTISEMENT
This page was tagged for
Goodachari telugu movie
Goodachari reviews
release date
Adivi Sesh, Sobhita Dhulipala
theatres list
Follow @fullhyderabad
Follow fullhyd.com on
About Hyderabad
The Hyderabad Community
Improve fullhyd.com
More
Our Other Local Guides
Our other sites
© Copyright 1999-2009 LRR Technologies (Hyderabad), Pvt Ltd. All rights reserved. fullhyd, fullhyderabad, Welcome To The Neighbourhood are trademarks of LRR Technologies (Hyderabad) Pvt Ltd. The textual, graphic, audio and audiovisual material in this site is protected by copyright law. You may not copy, distribute, or use this material except as necessary for your personal, non-commercial use. Any trademarks are the properties of their respective owners. More on Hyderabad, India. Jobs in Hyderabad.