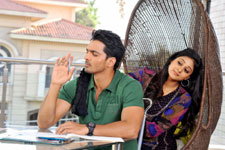 Kritika Deval / fullhyd.com
EDITOR RATING
3.5
Performances
Script
Music/Soundtrack
Visuals
5.5
3.0
3.5
3.0
Suggestions
Can watch again
No
Good for kids
No
Good for dates
No
Wait to rent it
Yes
Brain burgers, live octopi, deep-fried bull testicles - the world has much to offer to those in search of variety. The question is, though, that just because it is different, does it become good?

Well, the makers of Maaya definitely seem to think that by choosing the "novel" concept of ESP, or extra-sensory perception, they have absolved themselves of all responsibility to give us a good story to go with it. In the process, they have also managed to drag out all novelty from the idea, making it an endless puddle of tedium.

The story, such as it is, is of a reporter called Meghana (Avanthika), a girl afflicted with ESP, as you must've heard if you've heard anything about the movie at all. Her special brand of ESP allows her to look into the future, specifically into future violent deaths.

She meets Siddharth Varma (Harshavardhan Rane) at work, and falls in love with him over the course of exactly three incidents, one close call with death, and one song, all of which happen before you can fully even register that they happened. Literally. It actually takes you 5 minutes to understand that the development of their relationship stops right there.

Enter twist. Ahem, we mean heroine no. 2 Pooja (Sushma Raj), Meghana's childhood "best friend" who also happens to be Siddharth's fiancée. There are troubled times ahead, and only Meghana knows about them. The question is, will her sad face and bloodshot eyes get there in time to avert them?

The problem with Maaya is not just that the plot is weak. The problem is that the film is so conscious of the fact that it has a "new" idea (it does not, btw), that it seems to have forgotten that you can actually do things with ideas apart from just telling people that you've had them. You start feeling bad for Avanthika's character the third time she has an episode, when you finally realize that all that this actor is called upon to do is go from looking melancholic to utterly broken. This is not because you see any actual ways in which her "super powers" affect her everyday interactions and relationships. Apparently, nobody notices people who've suddenly stopped in the middle of crowded places and are now clutching their heads in pain.

After the close call with death that we mentioned above, Meghana confesses her ability to her father. Her father coolly replies with a series of "facts" that basically imply that ESP is naturally occurring and nothing to worry about, and uses "science" to explain them. That's it. Look, we get that they're just trying to show a nice dad who's, like, super chill about stuff, but if the movie is set in a universe where claims of flashes from the future aren't at least followed by a visit to a shrink, then why is this story even important enough to tell?

You have yet another twist towards the end that tries to tie up all the loose ends that the movie doesn't quite have, but that's definitely a case of too little, too late.

Avanthika looks pretty, but there is no way to judge her performance based on a character so very stunted. Harshavardhan Rane is pretty, too, (maybe even prettier) and does justice to a role that has a few more dimensions. Sushma Raj is bubbly, and grates every second she's on screen. Most of the supporting cast is completely unnecessary to the plot.

The cinematography is shockingly unpolished, disappointing given the industry is moving towards a place where even small budget films seem to have a talented technical crew on board. The music is lacklustre with the exception of two numbers.

Neelakanta is a director who is known for working with complicated characters. The fact that he took up an idea that was potentially complicated, and stripped it of all that could be of interest, is something that bodes ill for how our cinema is heading, which is a better piece of foresight than anything pictured in this film.
Share. Save. Connect.
Tweet
MAAYA SNAPSHOT 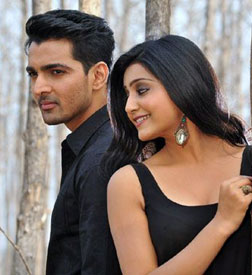 ADVERTISEMENT
This page was tagged for
Maaya telugu movie
Maaya reviews
release date
Harshvardhan Rane, Avanthika
theatres list
Follow @fullhyderabad
Follow fullhyd.com on
About Hyderabad
The Hyderabad Community
Improve fullhyd.com
More
Our Other Local Guides
Our other sites
© Copyright 1999-2009 LRR Technologies (Hyderabad), Pvt Ltd. All rights reserved. fullhyd, fullhyderabad, Welcome To The Neighbourhood are trademarks of LRR Technologies (Hyderabad) Pvt Ltd. The textual, graphic, audio and audiovisual material in this site is protected by copyright law. You may not copy, distribute, or use this material except as necessary for your personal, non-commercial use. Any trademarks are the properties of their respective owners. More on Hyderabad, India. Jobs in Hyderabad.