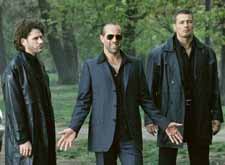 Get set for a lot of state-of-the-art surveillance equipment, tense operatives staring at screens, someone egging them on like a football coach, and lots of people hanging around for the last scene when they can go "Hurrah" in chorus. In other words, another CIA-centric, Armageddon scenario movie. And CIA is not even "Crackers in my A**" as Chris Rock would have you believe.

Bad Company has scenes that keep reminding you of hajaar different espionage movies - and they all seem better. The opening scene brings back any number of flicks including a silly Van Damme movie called Maximum Risk. And the saddest thing is that the Van Damme flick comes off better. 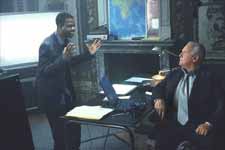 Kevin Pope (Chris Rock) is an undercover CIA agent, and is trying to close a deal involving a thermo-nuclear weapon. He dies saving senior Agent Oakes (Anthony Hopkins). Then who is going to shoot his mouth off here? Convenient identical twin bro Jake Hayes (Chris Rock again), who plays chess, sells tickets in black and, as DJ, plays boy-band music at discotheques. He is recruited, gets 50k, and as a bonus can also avenge a bro he never knew he had. All he has to do is to wash his mouth out with all the soap in the world and then close the deal his bro was involved in. 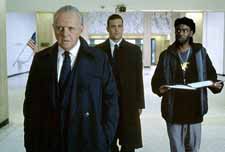 No Rocky-like training sequence here. Instead, we have some bland learning slices of reel where Jake learns how to talk about STDs and pregnancy in whatever lingo the Czechs use. Then there are attempts at his life by whoever killed his bro 'cos they think he is his bro. Then the bad guys and the badder guys are introduced (to us, not to each other), and after some predictable double-crosses, the bomb is defused, Jake's girlfriend saved and all the terrorists shot to wherever terrorists are shot to. Agent Oakes just sighs wearily all along.

The story ain't bad, it's just that we have already seen 3,653,035 permutations of this theme. Mel Gibson and Danny Glover got away with four variations in four consecutive Lethal Weapons. Then we had Travolta playing around in Broken Arrow and Swordfish. Then we had - oh, enough, already... 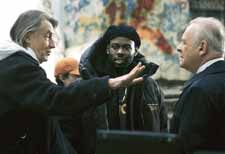 The problem is, Chris Rock looks like an amnesiac lost in Coney Island, and Anthony Hopkins sports a sardonic, wry smile, looking like he knows just what we, the audience, are going through. The bad guys are hopeless, and look like they are amateur actors trying to imitate megalomaniacs from B-grade movies.

The music is good, but belongs a movie on a much more serious plane, maybe the latest Tom Clancy adaptation, "The Sum Of All Fears".

And like they say, the last word is always important. Usually with most comedians I would let them have the last say, but not Chris Rock. That would end up looking like, "Get the - beep - outta here!" or "What the - beep - are you upto?" or even "Ain't I - beep - FUNNY?"

ADVERTISEMENT
This page was tagged for
Bad Company english movie
Bad Company reviews
release date
Anthony Hopkins, Chris Rock
theatres list
Follow @fullhyderabad
Follow fullhyd.com on
About Hyderabad
The Hyderabad Community
Improve fullhyd.com
More
Our Other Local Guides
Our other sites
© Copyright 1999-2009 LRR Technologies (Hyderabad), Pvt Ltd. All rights reserved. fullhyd, fullhyderabad, Welcome To The Neighbourhood are trademarks of LRR Technologies (Hyderabad) Pvt Ltd. The textual, graphic, audio and audiovisual material in this site is protected by copyright law. You may not copy, distribute, or use this material except as necessary for your personal, non-commercial use. Any trademarks are the properties of their respective owners. More on Hyderabad, India. Jobs in Hyderabad.