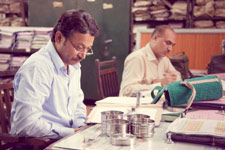 Swayamsrestha Kar / fullhyd.com
EDITOR RATING
8.0
Performances
Script
Music/Soundtrack
Visuals
8.0
8.0
7.0
8.5
Suggestions
Can watch again
Yes
Good for kids
Yes
Good for dates
Yes
Wait to rent it
No
Years clock the distance that you have covered, stranger. Time falls off you like the peeling plastic sheath of a newly purchased gadget. Gone are the days of youth and impulsive mirth; the present exacts a terribly dulling penance for past joys. You wear your city like a shield, and use your routine like a talisman to ward off the danger of straying into potentially illicit snares.

This movie is for you. You, who are the accursed watchman at the gates of nostalgia. You, who travel wearily along the barren mazes of a clockwork life, and take great care never to look back, afraid that re-visiting the pleasant rendezvous of the days gone by will bring you great pain.

Be brave. Look back. Set forth on that journey of reminiscence.

The Lunchbox is less of a movie and more of a poetic sojourn into the comforting familiarity of remembrance. Every frame is seeped with a sense of nostalgia - not only for the past, but also for the present. For the film might lead you to look back at your present from an imagined point in the future, and to find that this self-imposed anamnesis will still be tinged with aching sadness.

Ila (Namrit Kaur) is the young wife to an increasingly distant husband. Her routine involves waking up, getting her little girl ready for school, packing her husband's lunch, washing clothes, and then waiting for her family to come home. Hers is the life of a typical home-maker in middle-class India. Huge expanses of waiting are punctuated with brief moments of companionship. Her adventures occur in the kitchen, when she tries new recipes, or chats with her neighbour who lives upstairs.

She cooks with the effortless elegance of the housewife, one who is assuredly the empress of her kitchen. Blackened pots and pressure cookers are her trusted allies. She cooks to engage her husband's attention, to remind him that she is the anchor in his life of corporate competitiveness and desperate ambition. She cooks to keep hope alive and to bring back lost love. But her husband remains unresponsive, and keeps sending back her carefully prepared lunches - half-eaten in the hands of the dabbawallah.

And then, Mumbai intervenes. The city, powered by the ineffable sorcery of fate, will always nourish and encourage seemingly impossible dreams. Due to a mistake made by the Mumbai dabbawallahs (a highly unlikely occurrence, as various characters affirm in the course of the movie), the lunch that Ila packs for her husband is instead delivered to an older widower called Saajan Fernandes (Irrfan Khan).

Saajan Fernandes is a government employee. He counters the gaping loneliness of his life by immersing himself into a routine that deadens any intensity of emotion that he might occasionally succumb to. His is the life of drab and dreary monotony. Having worked in the same firm for 35 years, he is poised on the brink of retirement, and has to train the new employee, Aslam Shiekh (Nawazuddin Siddique), who's going to replace him.

When Saajan receives the misplaced lunchbox, he's visibly perplexed. His impassive demeanour is shaken, and the home-cooked food (a thrilling departure from the tasteless fare that his neighbourhood restaurant keeps sending him) brightens his day. Finally, Ila finds an interested admirer (and critique). Finally, there's a glimmer of hope.

The two start corresponding through letters that are packed into the lunchbox along with the food. Haltingly and demurely, love starts to weave its yarn, its tapestry bolstered and held together by the tanginess of chillies and lemons, the creamy indulgence of paneer, and the smoky splendour of stuffed aubergines.

Ritesh Batra is as polished a film-maker as he is a nuanced script writer. It is evident that the Lunchbox is a movie that has been made with staggering amounts of affection for the art of cinema. The cinematography is wonderfully orchestrated, and the camera plays on Mumbai like the city were a stringed musical instrument.

The film is hauntingly simple in its premise. The lead actors could easily get lost in a crowd. The story has been done to death. But in spite of it all, the film succeeds in tugging at heartstrings that you never even knew existed, it invokes emotions that you cannot define, and it goes beyond what the director puts in the frames. THAT is what cinema is supposed to be.

Irrfan Khan is mesmerising as Saajan Fernandes. His performance is almost meditative in nature, and shows us a man who is revelling in his craft as an actor. He imbibes his character with a quite charisma that is supremely adorable.

Namrit Kaur is such a revelation! Rarely do we come across an actress who is so comfortable and confident in front of the camera. We could sing paeans to her eyes, but that would be creepy. So, we'll refrain.

Nawazuddin Siddique plays the oafish Aslam with panache. He relentlessly forwards the narrative in a film where the lead characters chose to emote so much through so less.

The Lunchbox is the sincerest movie that this reviewer has watched in a long time. If we praise it any more, we'll be overdoing it. And that will be ironical, since the movie is so sparse and yet so spectacular. Sod it, we did it anyways.
Share. Save. Connect.
Tweet
THE LUNCHBOX SNAPSHOT 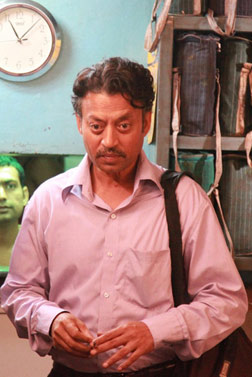 See The Lunchbox full details
THE LUNCHBOX USER REVIEWS
1 - 2 OF 2 COMMENTS
POSITIVE  |  NEGATIVE |  NEWEST  |  OLDEST  |  MOST HELPFUL  |  LEAST HELPFUL
USER RATING
6.0
1 USER
Performances
Script
Music/Soundtrack
Visuals
NA
NA
NA
NA
Can watch again - NA
Good for kids - NA
Good for dates - NA
Wait to rent it - NA
2power10 on 23rd Sep 2013, 9:35am | Permalink
A classic case of the emperor's new clothes. This is just the sort of vague, rambling movie that critics love to think they love. This is basically a bunch of vignettes of 4 lonely people in the big city. The open-ended ending didn't go down well for me. And what is all this silly fuss over it not making it to the Oscars? I'm surprised and shocked that journalists of all hues have taken it upon themselves to promote the film on all platforms possible. Methinks this movie is exactly as good/bad as Dhobi Ghat was.
RATING
6
Hari on 24th Sep 2013, 12:20am | Permalink
This ^^
It is a decent movie. Not bad at all but nothing to gloat about. Critics do not have a balance. They either gloat too much or pan too much. Reality is somewhere in between that never comes out.
Hari on 22nd Sep 2013, 9:42pm | Permalink
One of the best Indian movies iv ever seen and probably the best endings (climax) ever,first half tends to be a bit slow,things get moving in the second and finishes up in a perfect way
LEAVE A COMMENT
fullhyd.com has 700,000+ monthly visits. Tell Hyderabad what you feel about The Lunchbox!
MORE MOVIES
Latest Reviews
Check
Pogaru (Telugu)
Naandhi
Kapatadhaari
Chakra
more
Chakra (Tamil)
Uppena
Zombie Reddy
G-Zombie
30 Rojullo Preminchadam Ela
Jai Sena
Bangaru Bullodu
Madam Chief Minister
Red (Telugu)
Master (Tamil)
Contemporary Reviews
2 Guns
Rush (English)
Malavita
Mahesh
Music Magic
more
Barister Shankar Narayan
Attharintiki Daredi
Phata Poster Nikla Hero
Potugadu
Needa
Kamina
Kiss
Grown Ups 2
Horror Story
Random Reviews
Chaamundi
Akka Bavekkada?
The Tuxedo
Kalyana Ramudu
Aurat Ki Pyaas
more
Mere Jeevan Saathi
Be Aabroo
Om Shanti Om
Thoota
Robot (Rajinikanth) (Hindi)
Adavi Kachina Vennela
Malini & Co
Beauty And The Beast (2017)
Chi La Sow
Three Monkeys
SEARCH MOVIES
Dissatisfied with the results? Report a problem or error, or add a listing.
ADVERTISEMENT
SHOUTBOX!
{{todo.name}}
{{todo.date}}
[
ip{{todo.ip}}
]
{{ todo.summary }}... expand »
{{ todo.text }} « collapse
First  |  Prev  |   1   2  3  {{current_page-1}}  {{current_page}}  {{current_page+1}}  {{last_page-2}}  {{last_page-1}}  {{last_page}}   |  Next  |  Last
{{todos[0].name}}

ADVERTISEMENT
This page was tagged for
The Lunchbox hindi movie
The Lunchbox reviews
release date
Irrfan Khan, Nimrat Kaur
theatres list
Follow @fullhyderabad
Follow fullhyd.com on
About Hyderabad
The Hyderabad Community
Improve fullhyd.com
More
Our Other Local Guides
Our other sites
© Copyright 1999-2009 LRR Technologies (Hyderabad), Pvt Ltd. All rights reserved. fullhyd, fullhyderabad, Welcome To The Neighbourhood are trademarks of LRR Technologies (Hyderabad) Pvt Ltd. The textual, graphic, audio and audiovisual material in this site is protected by copyright law. You may not copy, distribute, or use this material except as necessary for your personal, non-commercial use. Any trademarks are the properties of their respective owners. More on Hyderabad, India. Jobs in Hyderabad.