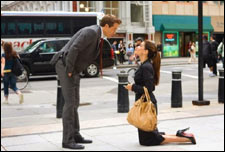 Samrat Sharma / fullhyd.com
EDITOR RATING
5.0
Performances
Script
Music/Soundtrack
Visuals
7.5
6.0
6.0
6.5
Suggestions
Can watch again
No
Good for kids
No
Good for dates
Yes
Wait to rent it
Yes
The week of the chick flicks, this. If you have read any reviews around these parts for studio-mandated romantic comedies, you will know that we hold no love for those kind of films. We hate them with a passion, rate them the lowest of the low, and unless you are a Dan Brown fan, you will not find any solace in reading those reviews.

As lazy as the profession of a romantic comedy writer I think is, what it really needs is some hard work. Someone needs to rise to the challenge of the formula of two unlikely people meeting and overcoming their physical/psychological/social differences to kiss at the end of the film, and write within that framework a certain breezy, gentle script with likeable characters and decent humour.

All it takes is someone who cares enough about their craft to try and make an effort and play to the strength of the chemistry between the onscreen leads. This film has that sort of a person. Pete Chiarelli doesn't exactly bring any sort of an A game, but he does try and write a half-decent dialogue supporting his cast.

Sandra Bullock is Margaret Tate, an editor running a book publishing company with an iron fist and being the hardest nosed boss around. With her work permit in America in trouble (she's Canadian), she blackmails her assistant Andrew (Ryan Reynolds) into marrying her to save both her job and his. While he turns the tables on her by taking control, they are forced to visit his family in Alaska to prove their knots, and so on.

Having gone through the motions of a standard romantic comedy, director Anne Fletcher does a very smart thing - she lets the relationship between the two leads play out on its own. Right between the plot is the unforced charisma of the two leads acting in light breezy moments with enough humour and charm to spare.

This doesn't mean that the film is aces - of course it is still the formula we hate, and it rears its ugly head once the couple are done bickering, but the bickering has quite a lot of snarky comments and genuine comedy in it. What helps the matters along is the fact that the lead happens to be Ryan Reynolds.

Ryan Reynolds thrives in these roles - his wry timing and biting sarcasm coming in pretty handy this time round - and he delivers another one where he delivers. His charm is palpable, and his timing note perfect as he runs through this completely formulaic and straight-out-of-a-template character, making it fun to watch. Bullock is a decent actress when she wants to be, and she slowly smoothes into her character, delivering the banter at a good pace.

They are both fine, but Betty White as the straight-talking grandmother steals the show. Again, this is as one-note and contrived as it comes. How many times have you seen the foul-mouthed grandmother in a romantic comedy about families? Betty White, however, takes the one-note character and runs with it. She genuinely brings in the laughs, and you love her for it.

Anne Fletcher is the director of 27 Dresses, the other conventional rom-com to get a decent score at fullhyd.com - and she makes two very wise choices. She stays away from potty humour, and she lets the script and the characters do her work for her. This is a standard stupid romantic comedy made with every convention in the book, but it is mildly entertaining because of the dialogue and the actors, and that surprises.

What also surprised me is how positive this review ended up sounding. It really isn't. If you don't like rom-coms, please stay away, this is exactly the kind of stuff you hate. If you like rom-coms, however, this is one film you won't have to apologize for. Sometimes even the formula works if they make an effort.
Share. Save. Connect.
Tweet
THE PROPOSAL SNAPSHOT

ADVERTISEMENT
This page was tagged for
The Proposal english movie
The Proposal reviews
release date
Sandra Bullock, Ryan Reynolds
theatres list
Follow @fullhyderabad
Follow fullhyd.com on
About Hyderabad
The Hyderabad Community
Improve fullhyd.com
More
Our Other Local Guides
Our other sites
© Copyright 1999-2009 LRR Technologies (Hyderabad), Pvt Ltd. All rights reserved. fullhyd, fullhyderabad, Welcome To The Neighbourhood are trademarks of LRR Technologies (Hyderabad) Pvt Ltd. The textual, graphic, audio and audiovisual material in this site is protected by copyright law. You may not copy, distribute, or use this material except as necessary for your personal, non-commercial use. Any trademarks are the properties of their respective owners. More on Hyderabad, India. Jobs in Hyderabad.