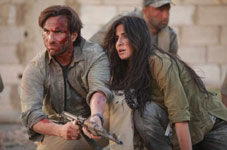 Zehra Abbas / fullhyd.com
EDITOR RATING
5.0
Performances
Script
Music/Soundtrack
Visuals
6.0
5.0
7.0
7.0
Suggestions
Can watch again
No
Good for kids
No
Good for dates
Yes
Wait for OTT
No
If Bajrangi Bhaijaan was a celebration of the essential goodness of all, Kabir Khan's latest offering touches the other end of the spectrum, acknowledging inherent evil and advocating a commensurate response. Phantom is essentially a revenge fantasy, based on Hussain S. Zaidi's book Mumbai Avengers, and imagines a phantom-like secret agent seeking vigilante justice for 26/11.

Daniyal Khan (Saif Ali Khan), a disgraced military man keen on redeeming his honour, agrees to participate in a covert RAW operation targeting the masterminds of 26/11. His partner is the beauteous Nawaz Mistry (Katrina Kaif), and together the duo pursue their targets in a brutal race to kill or be killed.

First things first - let's talk about Saif Ali Khan who plays the titular protagonist. Daniyal Khan is a court-martialed army officer turned secret agent, nicknamed Phantom by the RAW, and sent on a operation to kill some of the world's most dangerous terrorists. How do you picture the guy? Dark, mysterious, menacing, ruthless? That would apply to Craig's Bond, as complex and flavorful as his martini. Daniyal Khan is more like Yakult. He is bland and boring, and it's really hard to cheer for him.

A trio needs to take responsibility for this - the director, the scriptwriter, and the actor. Somewhere their wires got mixed, and what was meant to be a cool, unflappable character simply leaves you cold. He doesn't have much personality, and even his tragic backstory fails to flesh out the character's human side. Pity, considering that Saif looks the part, and has the potential to act the part. A suitable vehicle continues to elude him.

Katrina Kaif looks gorgeous as usual, but it's a little hard to take her seriously what with the predictable absence of acting chops, and the surprising presence of perfect make-up and hair throughout the film. Even when she runs from a barrage of bullets in Syria, she comes out looking dewy-fresh on the other side, and just a tad breathless. You get the impression she's thinking, "Thank God I wore smudge-proof lipstick today." To be fair, her outing shows a sincere attempt at improving her acting skills, but her dialogue delivery lets her down yet again.

Mohammed Zeeshan Ayyub puts in an earnest performance as the newbie RAW agent Mishra, but his piece often oscillates between patriotism and jingoism. Sabyasachi Chakrabarty also deserves a nod for putting in a confident turn as the RAW chief despite the limitations of his role. Another character that garners positive attention in the film is that of an elderly widow, played by Sohaila Kapur who conveys the pain of a bereaved mother touchingly.

Now this is an out-and-out action thriller, and you can't help but compare its action choreography to the Mission Impossible or Bourne films due to the international look of the film. Don't. The action is entertaining enough, but it doesn't have the relentless, raw brutality of Bourne or the jaw-dropping spectacle and originality of MI. Even the elimination schemes lack an essential element of really great action - chutzpah.

That being said, the cinematography is beautifully done, and it's a refreshing treat to visit locations as disparate as Mumbai, Chicago, London, Nepal, Jammu, Syria, Lebanon, Jordan and, of course, Pakistan. Full marks to the makers for fantastic production design - the sets depicting war-torn Syria (shot in Lebanon), and small-town Pakistan (shot in apna Punjab) look authentic and convincing.

The feisty background score bounces around with the intrepid camera, and even takes on a local flavor, location to location. The song Afghan Jalebi deserves special mention for its catchy tune, and the clever and unobtrusive way in which it has been inserted into the narrative without affecting the pace.

At 147 minutes, Phantom is a long film, but for the most part, it keeps you engaged. The first half is certainly fast-paced, but it suffers from an all too slick and convenient series of events, as our hero and heroine seem to cruise along easily on their mission. The second half focuses on the Pakistani leg of the mission, and this is where the film is stronger. Unlike the Western or Middle-Eastern locations of the first half, the milieu is more familiar here, and the makers benefit from it. The characters and the complications ring true, and make the movie more interesting.

Keep in mind that Phantom is a cinematic adaptation of a novel. So you understand Kabir Khan's tendency to often sacrifice logic to the time constraints of the cinematic medium. However, the script is a definite over-simplification of complex scenarios and complex players.

Reason would dictate that this simplistic version of a ferociously patriotic idea would be best served hot - the kind of dramatic rendition that Bollywood does well. Inexplicably, the makers of Phantom have served it cold. In their quest to be subtle, the makers have made almost all the characters colourless and dull. The belated drama in the last ten minutes isn't able to compensate for that, and if anything, it's jarring.

What works, and deserves mention, is the makers' balanced portrayal of the bad guys. They've refrained from using broad brushstrokes of nationality or religion, and have clearly made a distinction between the mentality of the ordinary man and that of the lunatic fringe. Ditto for the muted romantic track which helps retain the audience's focus on the main plot.

Phantom skates along on the surface of your consciousness, but it lacks the soul to dive deep and take hold of you. If, like all Indians, you too were scarred by 26/11, and are seeking some form of cinematic catharsis, then this is probably not the ideal film for you. However, if you're looking for a regular action thriller to watch this weekend, then by all means, check it out.
Share. Save. Connect.
Tweet
PHANTOM (HINDI) SNAPSHOT 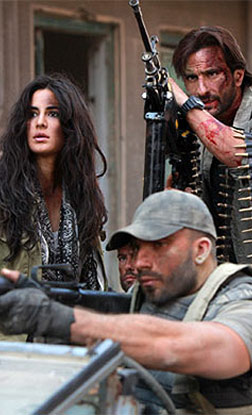 ADVERTISEMENT
This page was tagged for
phantom hindi movie
Phantom (Hindi) hindi movie
Phantom (Hindi) reviews
release date
Saif Ali Khan, Katrina Kaif
Follow @fullhyderabad
Follow fullhyd.com on
About Hyderabad
The Hyderabad Community
Improve fullhyd.com
More
Our Other Local Guides
Our other sites
© Copyright 1999-2009 LRR Technologies (Hyderabad), Pvt Ltd. All rights reserved. fullhyd, fullhyderabad, Welcome To The Neighbourhood are trademarks of LRR Technologies (Hyderabad) Pvt Ltd. The textual, graphic, audio and audiovisual material in this site is protected by copyright law. You may not copy, distribute, or use this material except as necessary for your personal, non-commercial use. Any trademarks are the properties of their respective owners. More on Hyderabad, India. Jobs in Hyderabad.